A specialized University of Innsbruck laboratory has successfully identified chaotic behavior in atoms by using ultracold gas. This breakthrough could enable physicists to better understand the world of quantum mechanics.

In a relatively short space of time, the study of ultracold gas has become one of the most interesting and potentially significant fields of atomic and molecular physics. This is because, in an ultracold world, scientists can control and observe atoms in a manner that is not possible in other conditions. 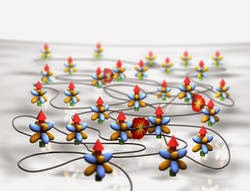 In labs where temperatures are measured in micro- or nano-kelvin (millionth or even billionth degree above absolute zero), atoms move incredibly slowly, and their behavior changes. This provides physicists with the opportunity to better understand the world of quantum physics (i.e. what happens at the sub-atomic or nanoscopic scale). Indeed, if sufficiently low temperatures are reached, atoms form a new state of matter that is governed by quantum mechanics.

One laboratory with ultracold facilities is situated at the Institute for Experimental Physics at the University of Innsbruck. Ground-breaking research carried out at the lab - funded under the FP7 project ERBIUM - identified chaotic behavior of particles in a quantum gas. This discovery is significant because it opens up new possibilities of observing interactions between quantum particles.

'For the first time we have been able to observe quantum chaos in the scattering behavior of ultracold atoms,' says team leader Francesca Ferlaino. 'Our work represents a turning point in the world of ultracold gases.'

Chaos to physicists does not mean disorder but rather a well-ordered system which, due to its complexity, shows random behavior. In order to observe quantum chaos, the physicists in Innsbruck cooled erbium atoms (erbium is a silvery white solid metal) to a few hundred nano-kelvin, and loaded them into a trap composed of laser beams. They then used a magnetic field to encourage particles to scatter, and after 400 milliseconds, recorded the number of atoms remaining in the trap.

This enabled the team to determine at which magnetic field two atoms are coupled to form a weakly-bound molecule. At this magnetic field, so-called Fano-Feshbach resonances emerge. After varying the magnetic field in each experimental cycle and repeating the experiment 14,000 times, the physicists identified 200 resonances - an amount unprecedented in ultracold quantum gases.

The scientists were able to show that the particular properties of erbium caused a highly complex coupling behaviour between particles, which could be described as chaotic. Erbium is a relatively heavy and highly magnetic mineral, and the interaction between two erbium atoms was shown to be significantly different from other quantum gases that have been investigated up until now.

While the experiment was unable to characterize the behavior of single atoms, it did enable the team, through complex statistical methods, to describe the behavior of particles. Ferlaino compares the method with sociology, which studies the behavior of bigger communities of people (whereas psychology describes relations between individuals).

The research has been published in the journal Nature. 'In the experiment, an ultracold gas of erbium atoms is shown to exhibit many Fano-Feshbach resonances,' the team writes in its summary. 'Analysis verifies that their distribution of nearest-neighbor spacings is what one would expect from random matrix theory ... our results therefore reveal chaotic behavior in the native interaction between ultracold atoms.'