The smallest, most abundant marine microbe, Prochlorococcus,is a photosynthetic bacterial species essential to the marine ecosystem.

It's estimated that billions of the single-celled creatures live in the oceans, forming the center of the marine food web.

Artist's interpretation of Prochlorococcus diversity in a drop of seawater. 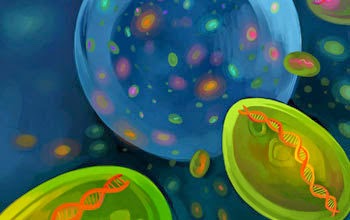 They occupy a range of ecological niches based on temperature, light, water chemistry and interactions with other species.

But the diversity within this single species remains a puzzle.

To probe this question, scientists at the Massachusetts Institute of Technology (MIT) recently performed a cell-by-cell genomic analysis of a wild population of Prochlorococcus living in a milliliter of ocean water--less than a quarter of a teaspoon--and found hundreds of distinct genetic subpopulations.

Each subpopulation in those few drops of water is characterized by a set of core gene alleles linked to a few associated flexible genes--a combination the scientists call the "genomic backbone." 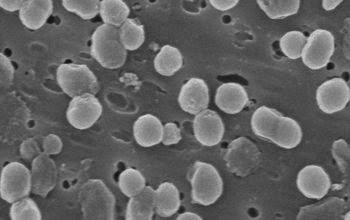 This backbone gives the subpopulation a finely tuned ability to fill a particular ecological niche.

Diversity also exists within backbone subpopulations; most individual cells in the samples carried at least one set of flexible genes not found in any other cell in its subpopulation.

A report on the research by Sallie Chisholm and Nadav Kashtan at MIT, along with co-authors, appears in this week's issue of the journal Science.

The National Science Foundation (NSF), through its Divisions of Environmental Biology and Ocean Sciences, supported the research.

"In this extraordinary finding on the power of natural selection, the scientists have discovered a mosaic of genetically distinct populations of one of the most abundant organisms on Earth," says George Gilchrist, program director in NSF's Division of Environmental Biology.

"In spite of the constant mixing of the oceans," Gilchrist says, "variations in light, temperature and chemistry create unique habitats that evolution has filled with an enormous diversity of populations over millions of years."

Adds David Garrison, program director in NSF's Division of Ocean Sciences, "The results will change the way marine ecologists think about how planktonic microbes and, in turn, planktonic communities may respond to climate and environmental change."

The scientists estimate that the subpopulations diverged at least a few million years ago.

The backbone is an older, more slowly evolving, component of the genome, while the flexible genes reside in areas of the genome where gene exchange is relatively frequent, facilitating more rapid evolution.

The study also revealed that the relative abundance of the backbone subpopulations changes with the seasons at the study site near Bermuda, adding strength to the argument that each subpopulation is finely tuned for optimal growth under different conditions.

"The sheer enormity of diversity that must be in the octillionProchlorococcus cells living in the seas is daunting to consider," Chisholm says. "It creates a robust and stable population in the face of environmental instability."

Ocean turbulence also plays a role in the evolution and diversity of Prochlorococcus.

A fluid mechanics model predicts that in typical ocean flow, just-divided daughter cells drift rapidly, placing them centimeters apart from one another in minutes, tens of meters apart in an hour, and kilometers apart in a week's time.

"The interesting question is, 'Why does such a diverse set of subpopulations exist?'" Kashtan says.

"The huge population size of Prochlorococcus suggests that this remarkable diversity and the way it is organized is not random, but is a masterpiece product of natural selection."

Chisholm and Kashtan say the evolutionary and ecological distinction among the subpopulations is probably common in other wild, free-living (not attached to particles or other organisms) bacteria species with large populations and highly mixed habitats.