An international team of planetary scientists determined that the Moon formed nearly 100 million years after the start of the solar system, according to a paper to be published April 3 in Nature. This conclusion is based on measurements from the interior of the Earth combined with computer
simulations of the protoplanetary disk from which the Earth and other terrestrial planets formed.

The Galileo spacecraft sent back this image of the Moon as it headed into the outer solar system. The distinct bright ray crater at the bottom of the image is the Tycho impact basin. 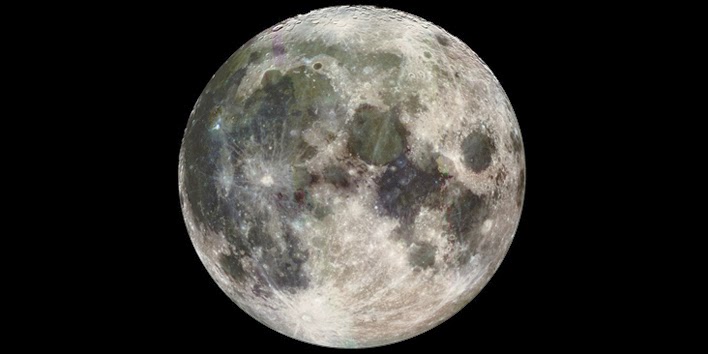 The team of researchers from France, Germany and the United States simulated the growth of the terrestrial planets (Mercury, Venus, Earth and Mars) from a disk of thousands of planetary building blocks orbiting the Sun. By analyzing the growth history of the Earth-like planets from 259 simulations, the scientists discovered a relationship between the time the Earth was impacted by a Mars-sized object to create the Moon and the amount of material added to the Earth after that impact.

Augmenting the computer simulation with details on the mass of material added to the Earth by accretion after the formation of the Moon revealed a relationship that works much like a clock to date the Moon-forming event. This is the first “geologic clock” in early solar system history that does not rely on measurements and interpretations of the radioactive decay of atomic nuclei to determine age.

“We were excited to find a ‘clock’ for the formation time of the Moon that didn’t rely on radiometric dating methods. This correlation just jumped out of the simulations and held in each set of old simulations we looked at,” says lead author of the Nature article Seth Jacobson of the Observatory de la Cote d’Azur in Nice, France.

Published literature provided the estimate for the mass accreted by Earth after the Moon-forming impact. Other scientists previously demonstrated that the abundance in the Earth’s mantle of highly siderophile elements, which are atomic elements that prefer to be chemically associated with iron, is directly proportional to the mass accreted by the Earth after the Moon-forming impact.

“This result is exciting because in the same simulations that can successfully form Mars in only 2 to 5 million years, we can also form the Moon at 100 million years. These vastly different timescales have been very hard to capture in simulations,” says author Dr. Kevin Walsh from the Southwest Research Institute (SwRI) Space Science and Engineering Division.

The paper, “Highly siderophile elements in Earth’s mantle as a clock for the Moon-forming impact,” by Seth Jacobson, Alessandro Morbidelli, Sean Raymond, David O’Brien, Kevin Walsh and David Rubie was published in the April 3, 2014, issue of Nature.