Mysteries Of A Nearby Planetary System's Dynamics Now Are Solved

Mysteries of one of the most fascinating nearby planetary systems now have been solved, report authors of a scientific paper to be published by the journal Monthly Notices of the Royal Astronomical Society in its early online edition on 22 April 2014.

This illustration shows the orbital distances and relative sizes of the four innermost planets known to orbit the star 55 Cancri A (bottom) in comparison with planets in own inner Solar System (top). Both Jupiter and the Jupiter-mass planet 55 Cancri "d" are outside this picture, orbiting their host star with a distance of nearly 5 astronomical units (AU), where one AU is equal to the average distance between the Earth and the Sun. 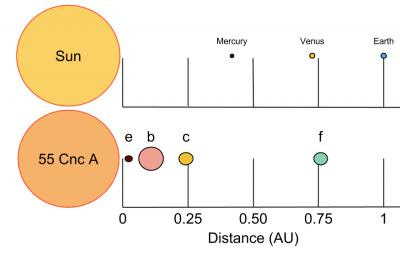 The study, which presents the first viable model for the planetary system orbiting one the first stars discovered to have planets -- the star named 55 Cancri -- was led by Penn State University graduate student Benjamin Nelson in collaboration with faculty at the Center for Exoplanets and Habitable Worlds at Penn State and five astronomers at other institutions in the United States and Germany.

Numerous studies since 2002 had failed to determine a plausible model for the masses and orbits of two giant planets located closer to 55 Cancri than Mercury is to our Sun. Astronomers had struggled to understand how these massive planets orbiting so close to their star could avoid a catastrophe such as one planet being flung into the star, or the two planets colliding with each other. Now, the new study led by Penn State has combined thousands of observations with new statistical and computational techniques to measure the planets' properties more accurately, revealing that their particular masses and orbits are preventing the system from self-destructing anytime soon.

"The 55 Cancri planetary system is unique in the richness of both the diversity of its known planets and the number and variety of astronomical observations," said Penn State Professor of Astronomy and Astrophysics Eric Ford, a coauthor of the paper who is a member of the Penn State Center for Astrostatistics and the Penn State Institute for CyberScience. "The complexity of this system makes it unusually challenging to interpret these observations," said Ford, whose specialties include the modeling of complex data sets.

In order to perform the new analyses, Nelson and Ford collaborated with computer scientists to develop a tool for simulating planetary systems using graphics cards to accelerate the computations. By combining multiple types of observations, the Penn State astronomers determined that one of the planets in the system (55 Cnc e) has eight times the mass of Earth, twice the distance of Earth's radius, and the same density as that of Earth. This planet is far too hot to have liquid water because its surface temperature is estimated to be 3,800 degrees Fahrenheit, so it is not likely to host life.

"These two giant planets of 55 Cancri interact so strongly that we can detect changes in their orbits. These detections are exciting because they enable us to learn things about the orbits that are normally not observable. However, the rapid interactions between the planets also present a challenge since modeling the system requires time-consuming simulations for each model to determine the trajectories of the planets and therefore their likelihood of survival for billions of years without a catastrophic collision," said Penn State graduate student Benjamin Nelson.

"One must precisely account for the motion of the giant planets in order to accurately measure the properties of the super-Earth-mass planet," Ford said. "Most previous analyses had ignored the planet-planet interactions. A few earlier studies had modeled these effects, but had performed only simplistic statistical analyses due to the huge number of calculations required for a proper analysis."

This image is a star map for the constellation Cancer and the 55 Cancri system. The star hosting the 55 Cancri planetary system can be seen with the naked eye from a dark site. For observers in the Northern hemisphere, Cancer is best viewed in the spring. The 55 Cancri planetary system orbits the star labeled rho^1, which is slightly to the left of the top star that is connected by lines in this illustration to show the constellation Cancer. 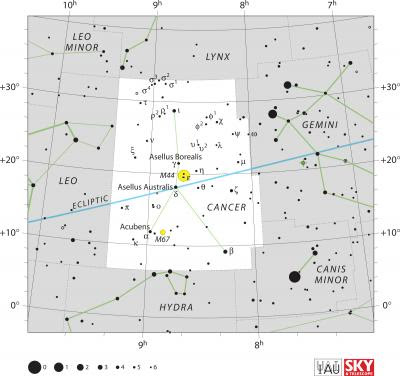 "This research achievement is an example of the scientific breakthroughs that come from data-intensive multidisciplinary research supported by the Penn State Institute for CyberScience," said Padma Raghavan, distinguished professor of computer science and engineering, associate vice-president for research, and director of the Penn State Institute for CyberScience.

The 55 Cancri planetary system is just 39 light years away in the constellation Cancer. The system shines brightly when viewed from Earth because it is so close, so astronomers have been able to directly measure the radius of its star -- an observation that is practical only for some of our closest stellar neighbors. Knowing the star's radius made it possible for astronomers to make precise measurements of its mass -- nearly the same mass as our Sun -- as well as the size and density of its super-Earth-size planet.

"Because 55 Cancri is so bright that it can be seen with the naked eye, astronomers have been able to measure the velocity of this star from four different observatories over a thousand times, giving the planets in this system much more attention than most exoplanets receive," said Penn State assistant professor Jason Wright, who led a program to scrutinize this and several other planetary systems.

Astronomers first discovered that 55 Cancri is orbited by a giant planet in 1997. Long-term observations by Wright and colleagues later made possible the detection of five planets orbiting the star, ranging from a cold giant planet with an orbit very similar to that of Jupiter to a scorching-hot "super-Earth" -- a type of planet with a mass higher than Earth's but substantially below that of Neptune, which has a mass 17 times greater than Earth.

Penn State Professor of Astronomy and Astrophysics Alexander Wolszczan and his colleague Dale Frail discovered the first planets ever detected outside our solar system. These planets orbit a distant pulsar star and were the first-known super-Earth-mass planets. Recent observaions by NASA's Kepler mission demonstrate that super-Earth-size planets are common around sun-like stars.

The study led by Nelson is part of a larger effort to develop techniques that will help with the analysis of future observations in the search for Earth-like planets. Penn State astronomers plan to search for Earth-mass planets around other bright nearby stars, using a combination of new observatories and instruments such as the MINERVA project and the Habitable Zone Planet Finder being built at Penn State for the Hobby-Eberly Telescope. "Astronomers are developing state-of-the-art instrumentation for the world's largest telescopes to detect and characterize potentially Earth-like planets. We are pairing those efforts with the development of state-of-the-art computational and statistical tools," Ford said.

Nelson will present the results of the new study at a meeting of the International Astronomical Union in Namur, Belgium in July 2014. In addition to astronomers at Penn State, the study's coauthors include scientists at the University of Florida, Yale University, the Max-Planck Institute for Astronomy in Germany, the University of Hawaii, and the Harvard-Smithsonian Center for Astrophysics.

The Center for Exoplanets and Habitable Worlds is supported by Penn State University, the Penn State Eberly College of Science, and the Pennsylvania Space Grant Consortium. Calculations were performed at the Penn State Research Computing and Cyberinfrastructure unit and at the University of Florida High Performance Computing Center. This research was supported by a NASA Origins of Solar Systems grant (NNX09AB35G) and a NASA Applied Information Systems Research Program grant (NNX09AM41G).