NASA's Hubble Space Telescope has weighed the largest known galaxy cluster in the distant universe and found that it definitely lives up to its nickname: El Gordo (Spanish for "the fat one").


Galaxy Cluster 'El Gordo' with Mass Map: This is a Hubble Space Telescope image of the most massive cluster of galaxies ever seen to exist when the universe was just half of its current age of 13.8 billion years. The cluster, catalogued as ACT-CL J0102-4915, contains several hundred galaxies swarming around under the collective gravitational pull. The total mass of the cluster, as refined in new Hubble measurements, is estimated to weigh as much as 3 million billion stars like our Sun (about 3,000 times as massive as our own Milky Way galaxy) — though most of the mass is hidden away as dark matter. 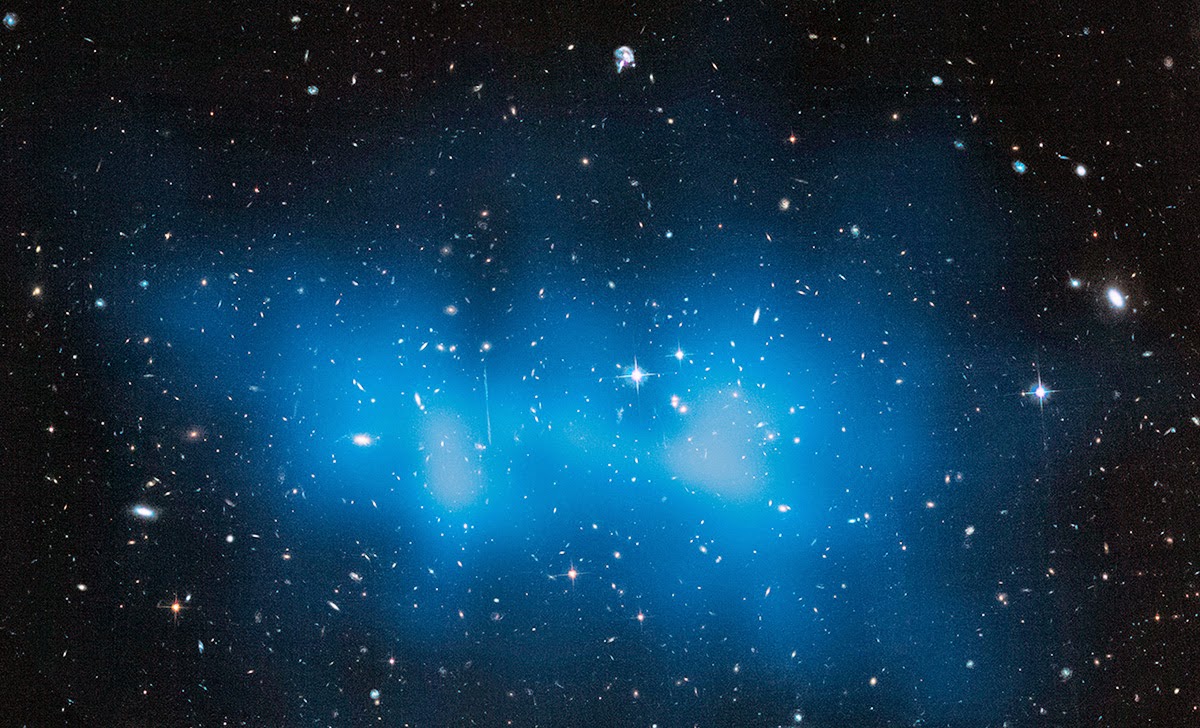 By precisely measuring how much the gravity from the cluster's mass warps images of far-more-distant background galaxies, a team of astronomers has calculated the cluster's mass to be as much as 3 million billion times the mass of our Sun. The Hubble data show that the cluster is roughly 43 percent more massive than earlier estimates based on X-ray and dynamical studies of the unusual cluster.

"It's given us an even stronger probability that this is really an amazing system very early in the universe," said team lead James Jee of the University of California at Davis. 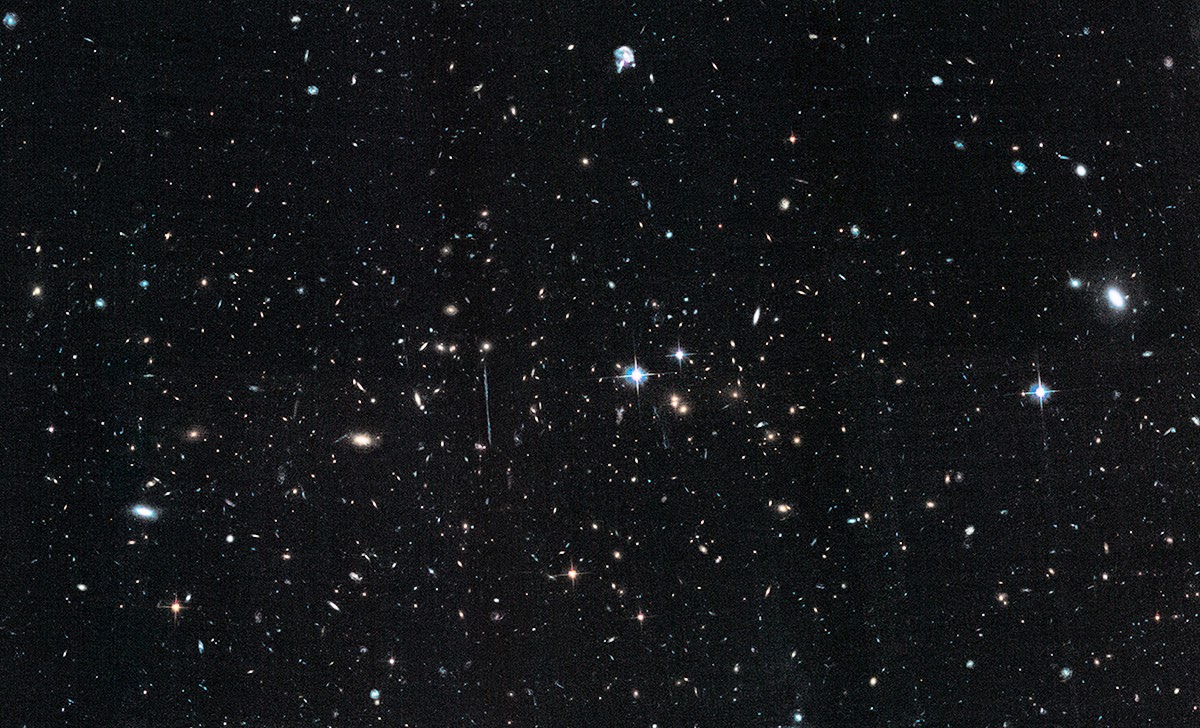 A fraction of this mass is locked up in several hundred galaxies that inhabit the cluster and a larger fraction is in hot gas that fills the entire volume of the cluster. The rest is tied up in dark matter, an invisible form of matter that makes up the bulk of the mass of the universe.

Though galaxy clusters as massive are found in the nearby universe, such as the so-called Bullet Cluster, nothing like this has ever been seen to exist so far back in time, when the universe was roughly half of its current age of 13.8 billion years. The team suspects such monsters are rare in the early universe, based on current cosmological models.

The immense size of El Gordo was first reported in January 2012. Astronomers estimated its huge mass based on observations from NASA's Chandra X-ray Observatory and galaxy velocities measured by the European Southern Observatory's Very Large Telescope array in Paranal, Chile. They were able to put together estimates of the cluster's mass based on the motions of the galaxies moving inside the cluster and the very high temperatures of the hot gas between the cluster galaxies.
The location of the dark matter is mapped out in the blue overlay. Because dark matter doesn't emit any radiation, Hubble astronomers instead precisely measure how its gravity warps the images of far background galaxies like a funhouse mirror. This allowed them to come up with a mass estimate for the cluster. The cluster was nicknamed El Gordo (Spanish for "the fat one") in 2012 when X-ray observations (shown in pink) and kinematic studies first suggested it was unusually massive for the time in the early universe when it existed. The Hubble data have confirmed that the cluster is undergoing a violent merger between two smaller clusters. 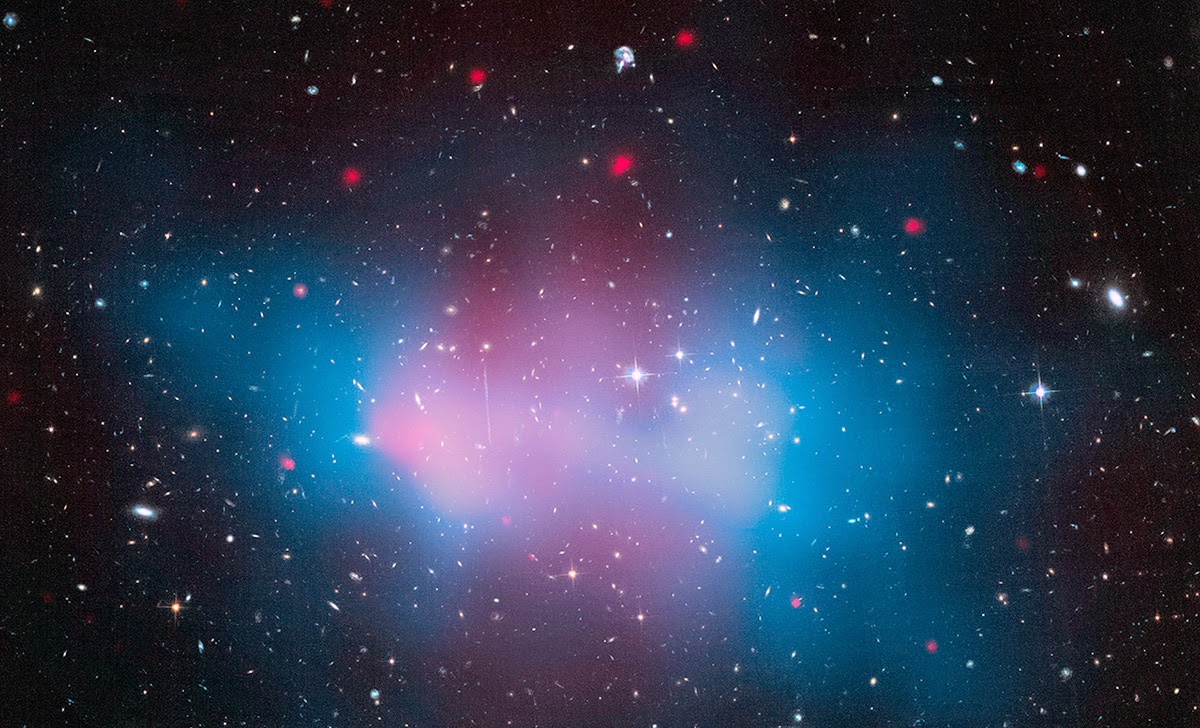 The challenge was that they noticed that the cluster (catalogued as ACT-CL J0102-4915) looked as if it might have been the result of a titanic collision between a pair of galaxy clusters the researchers describe as "seeing two cannonballs hit each other."

"We wondered what happens when you catch a cluster in the midst of a major merger and how the merger process influences both the X-ray gas and the motion of the galaxies," explained John Hughes of Rutgers University. "So the bottom line is that because of the complicated merger state, it left some questions about the reliability of the mass estimates we were making."

"That's where the Hubble data came in," said Felipe Menanteau of the University of Illinois at Urbana-Champaign. "We were in dire need for an independent and more robust mass estimate given how extreme this cluster is and how rare its existence is in the current cosmological model. There was all this kinematic energy that could be unaccounted for and could potentially suggest that we were actually underestimating the mass." The expectation of "unaccounted energy" comes from the fact that the merger is occurring tangentially to the observers' line of sight. This means they are potentially missing a good fraction of the kinetic energy of the merger because their spectroscopic measurements only track the radial speeds of the galaxies. 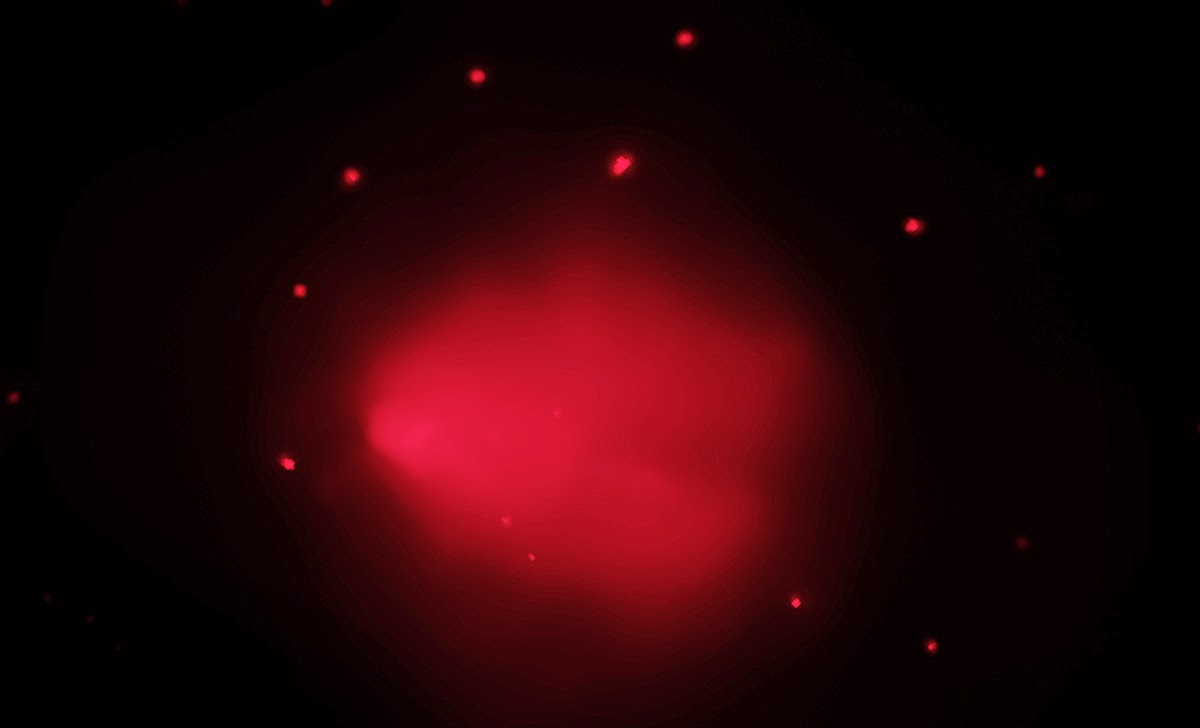 The team used Hubble to measure how strongly the mass of the cluster warped space. Hubble's high resolution allowed measurements of so-called "weak lensing," where the cluster's immense gravity subtly distorts space like a funhouse mirror and warps images of background galaxies. The greater the warping, the more mass is locked up in the cluster. "What I did is basically look at the shapes of the background galaxies that are farther away than the cluster itself," explained Jee. 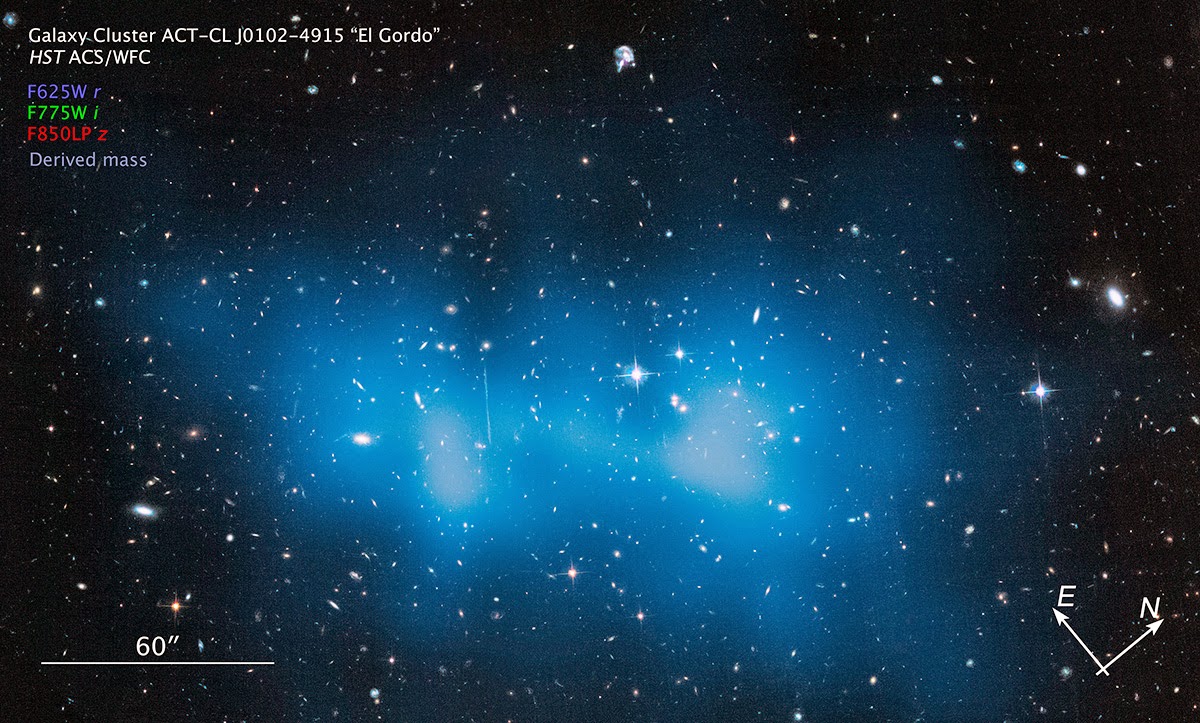 The team's next step with Hubble will be to try to get a large mosaic image of the cluster. It doesn't fit into Hubble's field of view. It's like looking at a giant's head and shoulders from the side, say researchers. "We can tell it's a pretty big El Gordo, but we don't know what kind of legs he has, so we need to have a larger field of view to get the complete picture of the giant," said Menanteau.