Using magnetically controlled nanoparticles to force tumor cells to 'self-destruct' sounds like science fiction, but could be a future part of cancer treatment, according to research from Lund University in Sweden.

"The clever thing about the technique is that we can target selected cells without harming surrounding tissue. There are many ways to kill cells, but this method is contained and remote-controlled", said Professor Erik Renström. 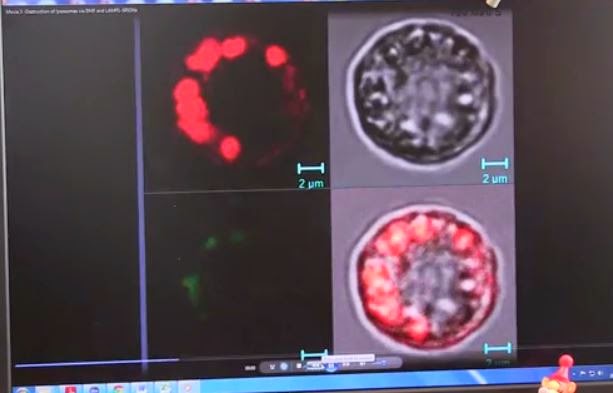 "Our technique, on the other hand, is able to attack only the tumour cells", said Enming Zhang, one of the first authors of the study. In brief, the technique involves getting the nanoparticles into a tumour cell, where they bind to lysosomes, the units in the cell that perform 'cleaning patrols'. The lysosomes have the ability to break down foreign substances that have entered a cell. They can also break down the entire cell through a process known as 'controlled cell death', a type of destruction where damaged cells dissolve themselves.

The researchers have used nanoparticles of iron oxide that have been treated with a special form of magnetism. Once the particles are inside the cancer cells, the cells are exposed to a magnetic field, and the nanoparticles begin to rotate in a way that causes the lysosomes to start destroying the cells.

The research group at Lund University is not the first to try and treat cancer using supermagnetic nanoparticles. However, previous attempts have focused on using the magnetic field to create heat that kills the cancer cells. The problem with this is that the heat can cause inflammation that risks harming surrounding, healthy tissue. The new method, on the other hand, in which the rotation of the magnetic nanoparticles can be controlled, only affects the tumour cells that the nanoparticles have entered.

The new technique is primarily intended for cancer treatment, but according to Erik Renström and his colleague Enming Zhang there may be other areas of application. One example is autoimmune diseases such as type 1 diabetes, in which the immune system attacks the body's own insulin production.

The 'superparamagnetic nanoparticles' have attracted a lot of interest from academia and industry in recent years. They are being tested in research on new diagnostic laboratory tests, new methods of viewing phenomena in living tissue, and new drugs.

The researchers at Lund University have a patent pending for their technique with the rotating nanoparticles. However, a lot of work remains before it can be transferred from the laboratory to clinical trials on patients.

The study is a collaboration between physicists, chemists, engineers and doctors from Sweden, Germany and the USA. It has been published in the American journal ACS Nano.