In collaboration with Australia's Defence Science and Technology Organisation (DSTO), the research team is aiming to be the first in the world to demonstrate an autonomous unmanned aircraft that can mimic birds by using updrafts around buildings to stay airborne.

Dr Reece Clothier with a prototype of a bio-inspired unmanned aircraft, under development at RMIT University. 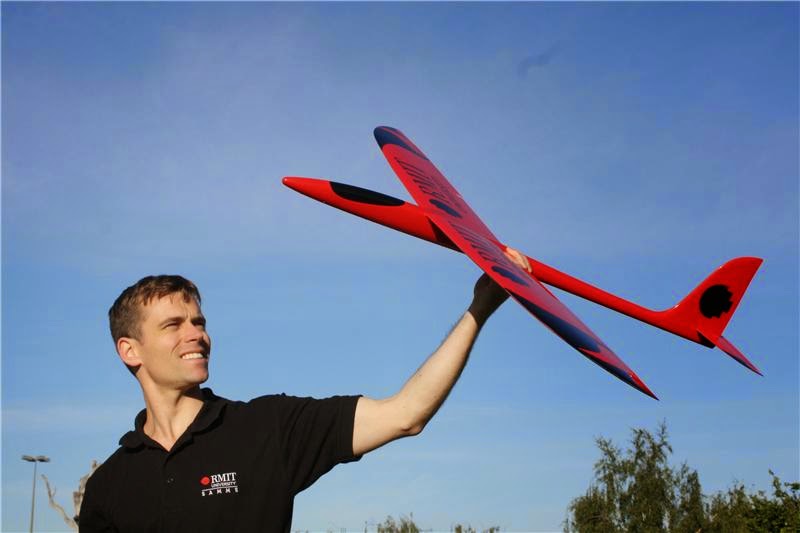 "This research aims to develop the sensing and control systems that will allow a small fixed-wing unmanned aircraft to achieve the same thing," Dr Clothier said.

"Birds make soaring look easy, but when we try to mimic what they know by instinct, we realise just how far advanced nature is in its designs."

The focus is on proving the feasibility of "urban" soaring, combining real-time sensing of wind with complex flow models to locate possible positive airflows around large buildings. Flying a small aircraft in those updrafts could significantly increase its endurance.

Dr Jennifer Palmer, a Senior Research Scientist in the Aerospace Division of DSTO, said the long-term goal was to design an unmanned aircraft that could autonomously predict airflows in its surrounding environment and - by using this information - minimise its energy consumption, maximise its endurance and avoid areas of high turbulence.

"Small aircraft used for communications relay or surveillance and reconnaissance could greatly benefit by having a means of exploiting naturally occurring updrafts and avoiding the deleterious effects of turbulence in urban environments," Dr Palmer said.

"DSTO undertakes research in a number of areas related to autonomous unmanned aircraft, and this is a great opportunity to engage with academia on a project with both scientific challenges and real-world outcomes."

The project is supported by the Defence Science Institute.