How Productive Are The Ore Factories In The Deep Sea?

Hydrothermal vents in the deep sea, the so-called "black smokers", are fascinating geological formations. They are home to unique ecosystems, but are also potential suppliers of raw materials for the future. They are driven by volcanic "power plants" in the seafloor and release amounts of energy that could meet the needs of a small town. But how exactly do they extract this energy from the volcanic rock? Researchers at GEOMAR Helmholtz Centre for Ocean Research Kiel have now used computer simulations to understand the underground supply routes. The study is published in the international journal "Nature".

Visualization of a computer model. The pathways for the hydrothermal vents at a mid ocean ridge are marked clearly. The arrows indicate the movement of the Earths' plates at the plate boundaries. 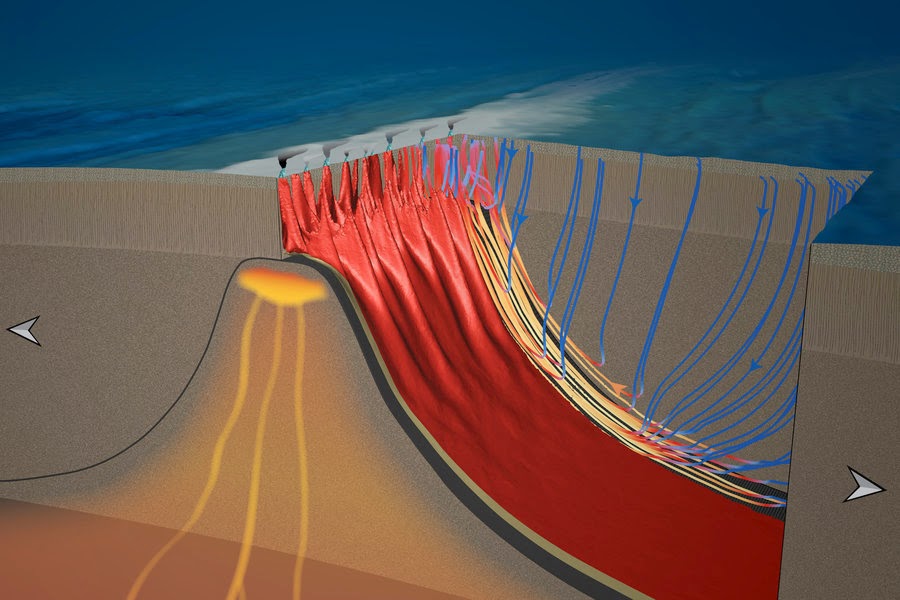 About ten years after the first moon landing, scientists on earth made a discovery that proved that our home planet still holds a lot of surprises in store for us. Looking through the portholes of the submersible ALVIN near the bottom of the Pacific Ocean in 1979, American scientists saw for the first time chimneys, several meters tall, from which black water at about 300 degrees and saturated with minerals shot out. What we have found out since then: These "black smokers", also called hydrothermal vents, exist in all oceans. They occur along the boundaries of tectonic plates along the submarine volcanic chains. However, to date many details of these systems remain unexplained.

One question that has long and intensively been discussed in research is: Where and how deep does seawater penetrate into the seafloor to take up heat and minerals before it leaves the ocean floor at hydrothermal vents? This is of enormous importance for both, the cooling of the underwater volcanoes as well as for the amount of materials dissolved. Using a complex 3-D computer model, scientists at GEOMAR Helmholtz Centre for Ocean Research Kiel were now able to understand the paths of the water toward the black smokers. The study appears in the current issue of the world-renowned scientific journal "Nature".

In general, it is well known that seawater penetrates into the Earth's interior through cracks and crevices along the plate boundaries. The seawater is heated by the magma; the hot water rises again, leaches metals and other elements from the ground and is released as a black colored solution. "However, in detail it is somewhat unclear whether the water enters the ocean floor in the immediate vicinity of the vents and flows upward immediately, or whether it travels long distances underground before venting," explains Dr. Jörg Hasenclever from GEOMAR.

Dr. Jörg Hasenclever in front of a visualization of his computer model. 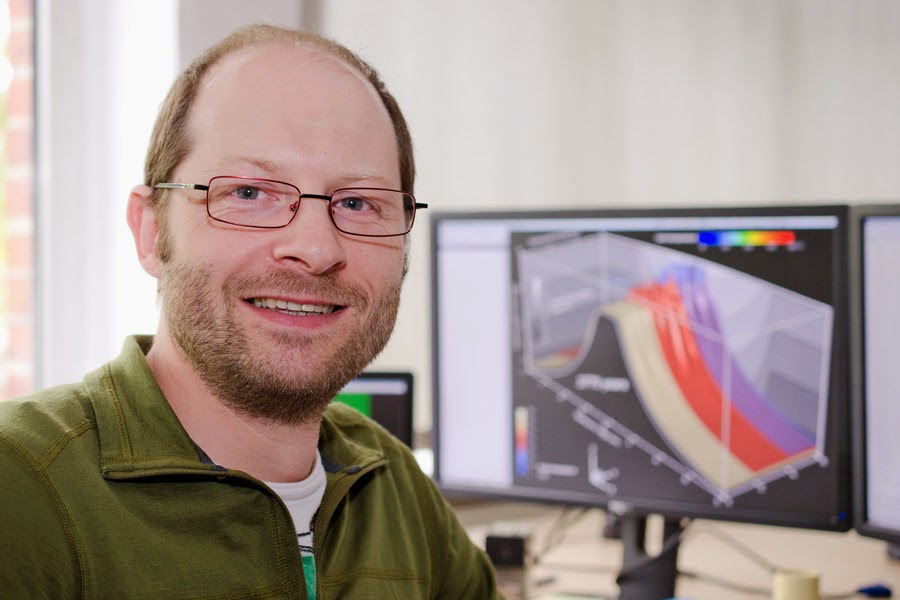 This question is not only important for the fundamental understanding of processes on our planet. It also has very practical implications. Some of the materials leached from the underground are deposited on the seabed and form ore deposits that may be of economically interest. There is a major debate, however, how large the resource potential of these deposits might be. "When we know which paths the water travels underground, we can better estimate the quantities of materials released by black smokers over thousands of years," says Hasenclever.

Hasenclever and his colleagues have used for the first time a high-resolution computer model of the seafloor to simulate a six kilometer long and deep, and 16 kilometer wide section of a mid-ocean ridge in the Pacific. Among the data used by the model was the heat distribution in the oceanic crust, which is known from seismic studies. In addition, the model also considered the permeability of the rock and the special physical properties of water.

The simulation required several weeks of computing time. The result: "There are actually two different flow paths – about half the water seeps in near the vents, where the ground is very warm. The other half seeps in at greater distances and migrates for kilometers through the seafloor before exiting years later." Thus, the current study partially confirmed results from a computer model, which were published in 2008 in the scientific journal "Science". "However, the colleagues back then were able to simulate only a much smaller region of the ocean floor and therefore identified only the short paths near the black smokers," says Hasenclever.

The current study is based on fundamental work on the modeling of the seafloor, which was conducted in the group of Professor Lars Rüpke within the framework of the Kiel Cluster of Excellence "The Future Ocean". It provides scientists worldwide with the basis for further investigations to see how much ore is actually on and in the seabed, and whether or not deep-sea mining on a large scale could ever become worthwhile. "So far, we only know the surface of the ore deposits at hydrothermal vents. Nobody knows exactly how much metal is really deposited there. All the discussions about the pros and cons of deep-sea ore mining are based on a very thin database," says co-author Prof. Dr. Colin Devey from GEOMAR. "We need to collect a lot more data on hydrothermal systems before we can make reliable statements".