Hot Clues To The Greatest Mystery

One of the greatest mysteries facing humans is how life originated on Earth. Scientists have determined approximately when life began (roughly 3.8 billion years ago), but there is still intense debate about exactly how life began. One possibility has grown in popularity in the last two decades - that simple metabolic reactions emerged near ancient seafloor hot springs, enabling the leap from a non-living to a living world.

To collect their samples, the researchers went to hydrothermal vent sites where the chemistry predicted they would find abundant methanethiol, and others where very little was predicted to form. In total, they measured the distribution of methanethiol in 38 hydrothermal fluids from multiple differing geologic environments including systems along the Mid-Atlantic Ridge, Guaymas Basin, the East Pacific Rise, and the Mid-Cayman Rise – an unprecedented survey - over a period between 2008 and 2012. 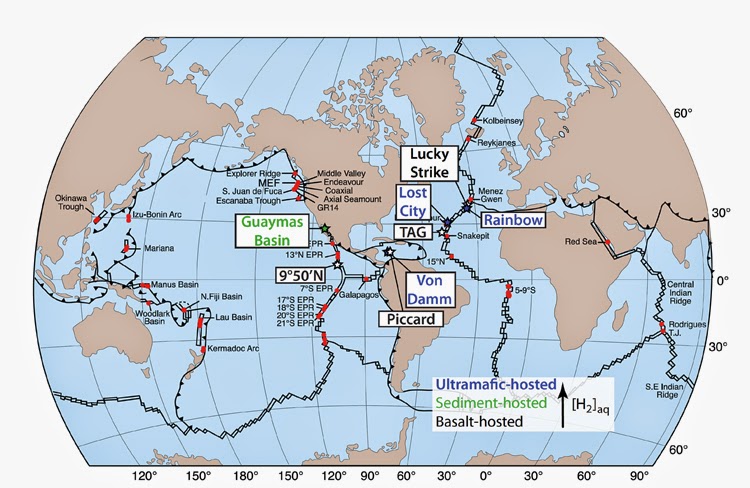 Recent research by geochemists Eoghan Reeves, Jeff Seewald, and Jill McDermott at Woods Hole Oceanographic Institution (WHOI) is the first to test a fundamental assumption of this ‘metabolism first’ hypothesis, and finds that it may not have been as easy as previously assumed. Instead, their findings could provide a focus for the search for life on other planets. The work is published in Proceedings of the National Academy of Science.

In 1977, scientists discovered biological communities unexpectedly living around seafloor hydrothermal vents, far from sunlight and thriving on a chemical soup rich in hydrogen, carbon dioxide, and sulfur, spewing from the geysers. Inspired by these findings, scientists later proposed that hydrothermal vents provided an ideal environment with all the ingredients needed for microbial life to emerge on early Earth. A central figure in this hypothesis is a simple sulfur-containing carbon compound called “methanethiol” - a supposed geologic precursor of the Acetyl-CoA enzyme present in many organisms, including humans. Scientists suspected methanethiol could have been the “starter dough” from which all life emerged.

The question Reeves and his colleagues set out to test was whether methanethiol—a critical precursor of life – could form at modern day vent sites by purely chemical means without the involvement of life. Could methanethiol be the bridge between a chemical, non-living world and the first microbial life on the planet?

Making methanethiol from the chemicals available in hydrothermal black smoker fluids was thought to have been an easy process. To test this theory, the researchers collected fluids in isobaric gas-tight samplers (IGTs) from black smokers and analyzed them for the presence of methanethiol. 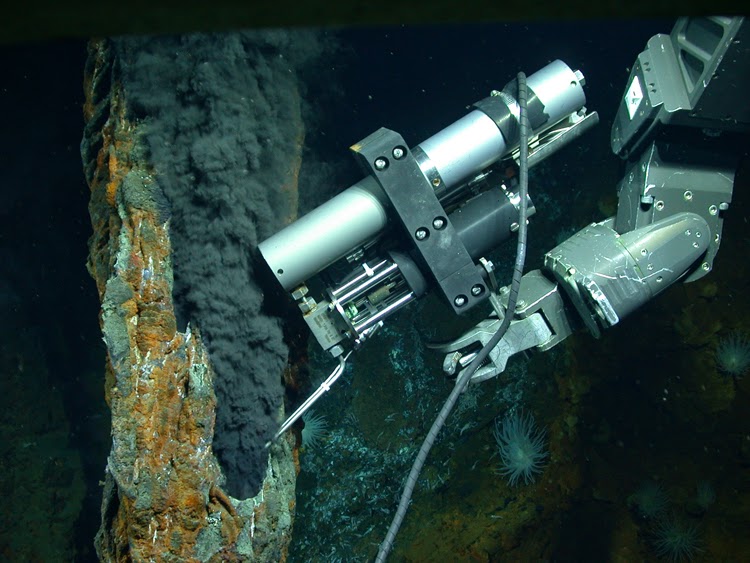 
Carbon dioxide, hydrogen and sulfide are the common ingredients present in hydrothermal black smoker fluids. “The thought was that making methanethiol from these basic ingredients at seafloor hydrothermal vents should therefore have been an easy process,” adds Reeves.

The theory was appealing, and solved many of the basic problems with existing ideas that life may have been carried to Earth on a comet or asteroid; or that genetic material emerged first – the “RNA World” hypothesis. However, says Reeves, “it’s taken us a while to get out there and actually start to test this ‘metabolism first’ idea in the natural environment, by using modern vents as analogs for those that were around when life first began.”

And when they did get out there, the scientists were surprised by what they found.

To directly measure methanethiol, the researchers went to hydrothermal vent sites where the chemistry predicted they would find abundant methanethiol, and others where very little was predicted to form. In total, they measured the distribution of methanethiol in 38 hydrothermal fluids from multiple differing geologic environments including systems along the Mid-Atlantic Ridge, Guaymas Basin, the East Pacific Rise, and the Mid-Cayman Rise over a period between 2008 and 2012.

Clear hot spring fluids spew from a talc structure at the Von Damm vent field, a mile and a half beneath the Caribbean Sea. The researchers show that fluids emanating from Von Damm and other hot spring areas around the global mid-ocean ridge system contain a sulfur compound, methanethiol, that is indicative of pyrolysed subsurface life. The red laser dots are 10cm apart, for scale. Photograph courtesy of the Little Hercules ROV, NOAA Okeanos Explorer Program, Mid-Cayman Rise Expedition 2011. 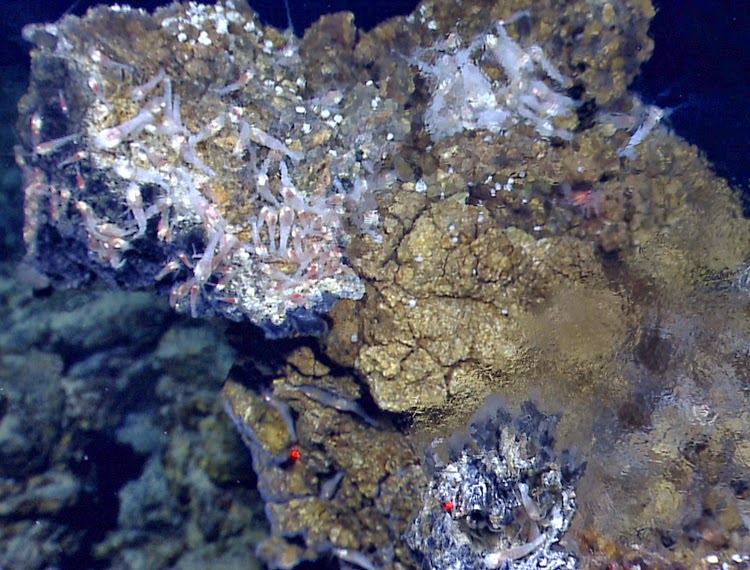 “Some systems are very rich in hydrogen, and when you have a lot of hydrogen it should, in theory, be very easy to make a lot of methanethiol,” says Reeves. The fluids were collected in isobaric gas-tight samplers(IGTs) developed by Jeffrey Seewald, which maintain fluids at their natural pressure and allow for dissolved gas analyses.

Instead of an abundance of methanethiol, the data they collected in the hydrogen-rich environments showed very little was present. “We actually found that it doesn’t matter how much hydrogen you have in black smoker fluids, you don’t seem to be making a lot of methanethiol where you should be making a lot of it,” Reeves says. Surprisingly, in the low-hydrogen environments, where much less should form, the research actually found more methanethiol than they had predicted, contradicting the original idea of how methanethiol forms. Overall, this means that jump-starting proto-metabolic reactions in hydrogen-rich early Earth hydrothermal systems through carbon-sulfur chemistry would likely have been much harder than many had assumed.

Critically, the researchers found an abundance of methanethiol being formed in low temperature fluids (below about 200°C), where hot black smoker fluid mixes with colder sea water beneath the seafloor. The presence of other telltale markers in these fluids, such as ammonia – a byproduct of biomass breakdown – strongly suggests these fluids are ‘cooking’ existing microbial organic matter. The breakdown of existing subseafloor life when conditions get too hot may therefore be responsible for producing large amounts of methanethiol.

“What we essentially found in our survey is that we don’t think methanethiol is forming by purely chemical means without the involvement of life. This might be disappointing news for anyone assuming an easy start for hydrothermal proto-metabolism,” says Reeves. “However, our finding that methanethiol may be readily forming as a breakdown product of microbial life provides further indication that life is present and widespread below the seafloor and is very exciting.”

The researchers believe this new understanding could change how we think about searching for life on other planets. “The upside is, now we have a pretty simple marker for life. Someday if we can land a rover on the ice-covered oceans of Jupiter’s moon Europa – another place in the Solar System that may host hydrothermal vents, and possibly life – and successfully drill through the ice, the first thing it should probably try to measure is methanethiol,” Reeves says. “This is already something scientists are thinking about, and it is exciting to think this might even happen in our life time.”

As for the search for the origins of life, Reeves agrees that hydrothermal vents are still a very favorable place for life to emerge, but, he says, “maybe methanethiol just wasn’t a good starter dough. The hydrothermal environment is still a perfect place to support early life, and the question of how it all started is still open.”

This research was supported by grants from the National Science Foundation and NASA. Additional funds were provided by the WHOI Deep Ocean Exploration Institute, InterRidge, and the Deutsche Forschungsgemeinschaft Research Center/Cluster of Excellence MARUM “The Ocean in the Earth System” (E.P.R.).