In 2005, NASA's Cassini spacecraft sent pictures back to Earth depicting an icy Saturnian moon spewing water vapor and ice from fractures, known as "tiger stripes," in its frozen surface. It was big news that tiny Enceladus—a mere 500 kilometers in diameter—was such an active place. Since then, scientists have hypothesized that a large reservoir of water lies beneath that icy surface, possibly fueling the plumes. Now, using gravity measurements collected by Cassini, scientists have confirmed that Enceladus does in fact harbor a large subsurface ocean near its south pole, beneath those tiger stripes.

This cartoon depicts the possible interior of Enceladus based on Cassini's gravity investigation. At high southern latitudes, a regional water ocean is shown sandwiched between an icy outer shell and a low density, rocky core. Cassini Imaging Science Subsystem images were used to depict the surface geology and the plumes. 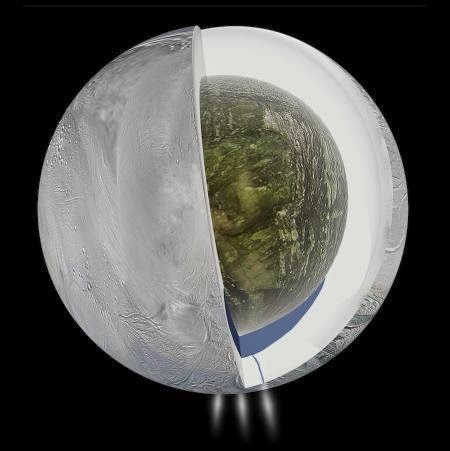 "For the first time, we have used a geophysical method to determine the internal structure of Enceladus, and the data suggest that indeed there is a large, possibly regional ocean about 50 kilometers below the surface of the south pole," says David Stevenson, the Marvin L. Goldberger Professor of Planetary Science at Caltech and an expert in studies of the interior of planetary bodies. "This then provides one possible story to explain why water is gushing out of these fractures we see at the south pole."

Stevenson is one of the authors on a paper that describes the finding in the current issue of the journal Science. Luciano Iess of Sapienza University of Rome is the paper's lead author.

During three flybys of Enceladus, between April 2010 and May 2012, the scientists collected extremely precise measurements of Cassini's trajectory by tracking the spacecraft's microwave carrier signal with NASA's Deep Space Network. The gravitational tug of a planetary body, such as Enceladus, alters a spacecraft's flight path ever so slightly. By measuring the effect of such deflections on the frequency of Cassini's signal as the orbiter traveled past Enceladus, the scientists were able to learn about the moon's gravitational field. This, in turn, revealed details about the distribution of mass within the moon.

"This is really the only way to learn about internal structure from remote sensing," Stevenson says. In fact, more precise measurements would require the placement of seismometers on Enceladus's surface—something that is certainly not going to happen anytime soon.

The key feature in the gravity data was a so-called negative mass anomaly at Enceladus's south pole. Put simply, such an anomaly exists when there is less mass in a particular location than would be expected in the case of a uniform spherical body. Since there is a known depression in the surface of Enceladus's south pole, the scientists expected to find a negative mass anomaly. However, the anomaly was quite a bit smaller than would be predicted by the depression alone.

"So, you say, 'Aha! This is compensated at depth,'" Stevenson says. 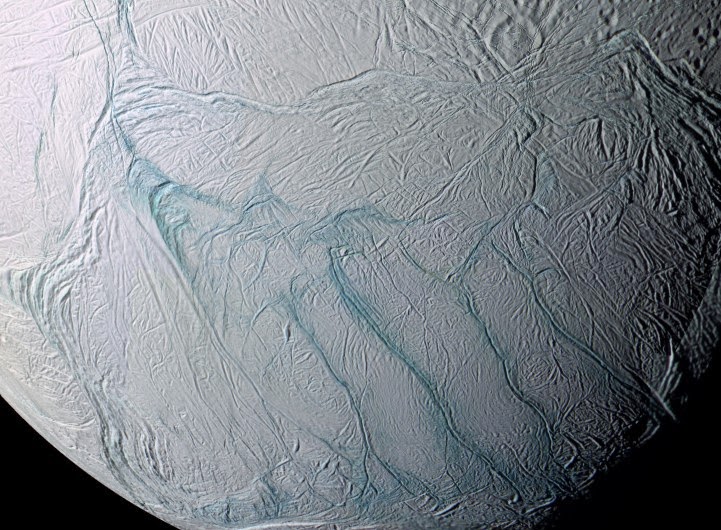 Credit: NASA
In fact, when the first gravity measurements were made in India, people were struck by the fact that Mount Everest did not seem to produce much of an effect. Today we know that, like most mountains on Earth, Mount Everest is compensated by a low-density root that extends many tens of kilometers below the surface. In other words, the material protruding above the surface is compensated by a reduction of density at depth.

In the case of Enceladus, the opposite is true. The absence of material at the surface is compensated at depth by the presence of material that is denser than ice. "The only sensible candidate for that material is water," Stevenson says. "So if I have this depression at the south pole, and I have beneath the surface 50 kilometers down a layer of water or an ocean, that layer of water at depth is a positive mass anomaly. Together the two anomalies account for our measurements."

Although no one can say for certain whether the subsurface ocean supplies the water that has been seen spraying out of the tiger stripes on Enceladus's surface, the scientists say that it is possible. The suspicion is that the fractures—in some way that is not yet fully understood—connect down to a part of the moon that is being tidally heated by the globe's repeated flexing as it traces its eccentric orbit. "Presumably the tidal heating is also replenishing the ocean," Stevenson says, "so it is possible that some of that water is making its way up through the tiger stripes."


The paper is titled "The Gravity Field and Interior Structure of Enceladus." Additional coauthors are Marzia Parisi, Douglas Hemingway, Robert A. Jacobson, Jonathan I. Lunine, Francis Nimmo, John W. Armstrong, Sami W. Asmar, Maria Ducci, and Paolo Tortora. The work was supported by the Italian Space Agency and by NASA through the Cassini project. The Cassini-Huygens mission is a cooperative project of NASA, the European Space Agency, and the Italian Space Agency. The Jet Propulsion Laboratory manages the mission for NASA's Science Mission Directorate.
on April 03, 2014