The world is less than 40 years away from a food shortage that will have serious implications for people and governments, according to a top scientist at the U.S. Agency for International Development.

"For the first time in human history, food production will be limited on a global scale by the availability of land, water and energy," said Dr. Fred Davies, senior science advisor for the agency's bureau of food security. "Food issues could become as politically destabilizing by 2050 as energy issues are today."

This is Dr. Fred Davies, US Agency for International Development senior science advisor for the agency's bureau of food security and a Texas A&M AgriLife Regents Professor of Horticultural Sciences. 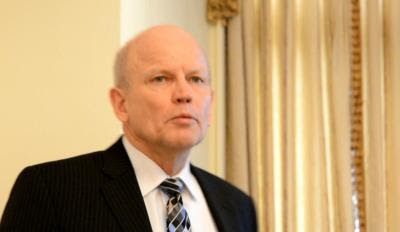 Davies, who also is a Texas A&M AgriLife Regents Professor of Horticultural Sciences, addressed the North American Agricultural Journalists meeting in Washington, D.C. on the "monumental challenge of feeding the world."

He said the world population will increase 30 percent to 9 billion people by mid-century. That would call for a 70 percent increase in food to meet demand.

"But resource limitations will constrain global food systems," Davies added. "The increases currently projected for crop production from biotechnology, genetics, agronomics and horticulture will not be sufficient to meet food demand." Davies said the ability to discover ways to keep pace with food demand have been curtailed by cutbacks in spending on research.

"The U.S. agricultural productivity has averaged less than 1.2 percent per year between 1990 and 2007," he said. "More efficient technologies and crops will need to be developed -- and equally important, better ways for applying these technologies locally for farmers -- to address this challenge." Davies said when new technologies are developed, they often do not reach the small-scale farmer worldwide.

"A greater emphasis is needed in high-value horticultural crops," he said. "Those create jobs and economic opportunities for rural communities and enable more profitable, intense farming." Horticultural crops, Davies noted, are 50 percent of the farm-gate value of all crops produced in the U.S.

He also made the connection between the consumption of fruits and vegetables and chronic disease prevention and pointed to research centers in the U.S. that are making links between farmers, biologists and chemists, grocers, health care practitioners and consumers. That connection, he suggested, also will be vital in the push to grow enough food to feed people in coming years.

"Agricultural productivity, food security, food safety, the environment, health, nutrition and obesity -- they are all interconnected," Davies said. One in eight people worldwide, he added, already suffers from chronic undernourishment, and 75 percent of the world's chronically poor are in the mid-income nations such as China, India, Brazil and the Philippines.

"The perfect storm for horticulture and agriculture is also an opportunity," Davies said. "Consumer trends such as views on quality, nutrition, production origin and safety impact what foods we consume. Also, urban agriculture favors horticulture." For example, he said, the fastest growing segment of new farmers in California, are female, non-Anglos who are "intensively growing horticultural crops on small acreages," he said.