Titan, Europa, Io and Phobos are just a few members of our solar system's pantheon of moons. Are there are other moons out there, orbiting planets beyond our sun?

NASA-funded researchers have spotted the first signs of an "exomoon," and though they say it's impossible to confirm its presence, the finding is a tantalizing first step toward locating others. The discovery was made by watching a chance encounter of objects in our galaxy, which can be witnessed only once.

"We won't have a chance to observe the exomoon candidate again," said David Bennett of the University of Notre Dame, Ind., lead author of a new paper on the findings appearing in the Astrophysical Journal. "But we can expect more unexpected finds like this."

Researchers have detected the first "exomoon" candidate -- a moon orbiting a planet that lies outside our solar system. Using a technique called "microlensing," they observed what could be either a moon and a planet -- or a planet and a star. This artist's conception depicts the two possibilities, with the planet/moon pairing on the left, and star/planet on the right. If the moon scenario is true, the moon would weigh less than Earth, and the planet would be more massive than Jupiter. 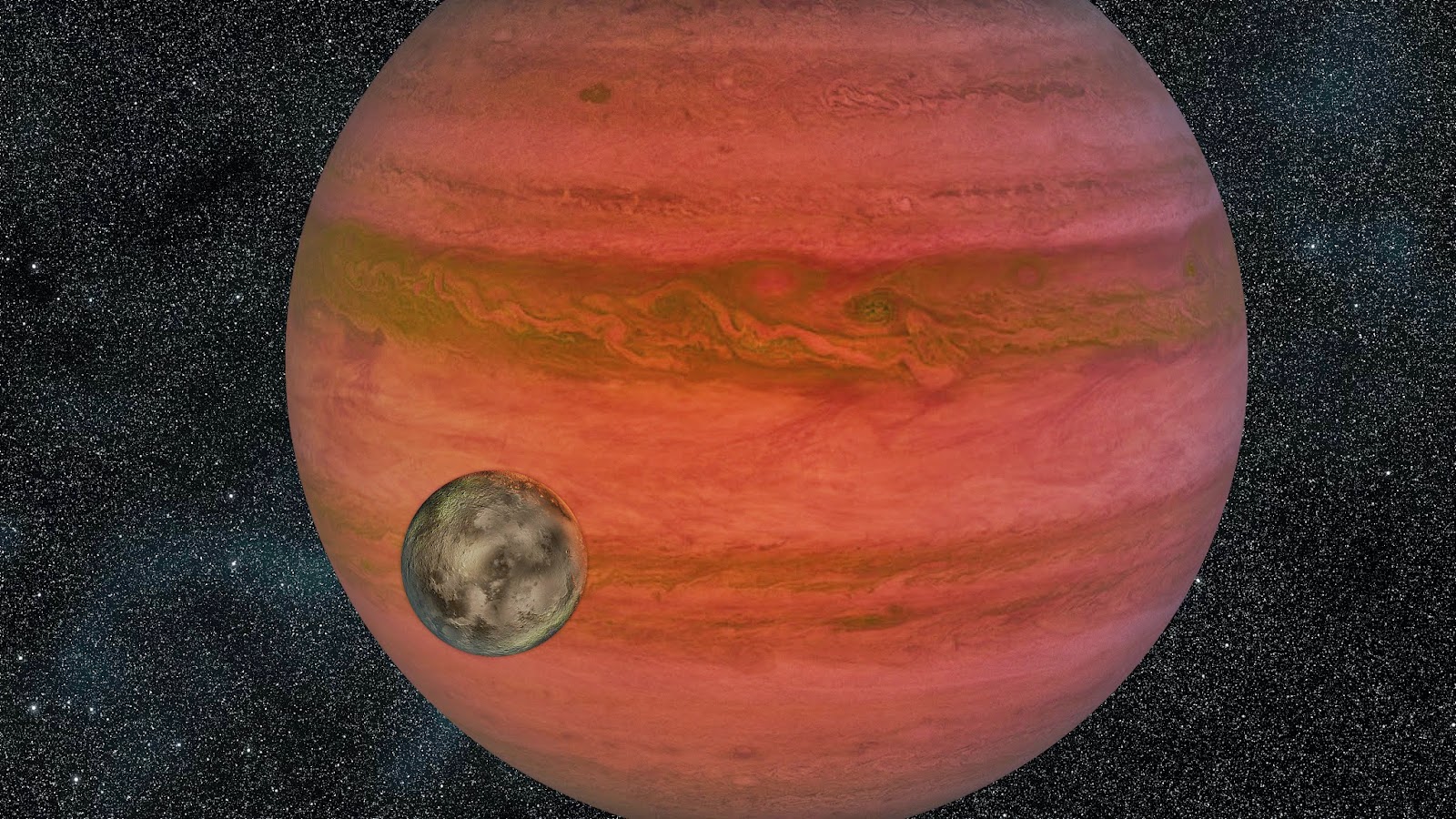 The scientists can't confirm the results partly because microlensing events happen once, due to chance encounters. The events occur when a star or planet happens to pass in front of a more distant star, causing the distant star to brighten. If the passing object has a companion -- either a planet or moon -- it will alter the brightening effect. Once the event is over, it is possible to study the passing object on its own. But the results would still not be able to distinguish between a planet/moon duo and a faint star/planet. Both pairings would be too dim to be seen.

In the future, it may be possible to enlist the help of multiple telescopes to watch a lensing event as it occurs, and confirm the presence of exomoons.

The international study is led by the joint Japan-New Zealand-American Microlensing Observations in Astrophysics (MOA) and the Probing Lensing Anomalies NETwork (PLANET) programs, using telescopes in New Zealand and Tasmania. Their technique, called gravitational microlensing, takes advantage of chance alignments between stars. When a foreground star passes between us and a more distant star, the closer star can act like a magnifying glass to focus and brighten the light of the more distant one. These brightening events usually last about a month.

In some cases, however, the foreground object could be a free-floating planet, not a star. Researchers might then be able to measure the mass of the planet relative to its orbiting companion: a moon. While astronomers are actively looking for exomoons -- for example, using data from NASA's Kepler mission - so far, they have not found any. In the new study, the nature of the foreground, lensing object is not clear. The ratio of the larger body to its smaller companion is 2,000 to 1. That means the pair could be either a small, faint star circled by a planet about 18 times the mass of Earth -- or a planet more massive than Jupiter coupled with a moon weighing less than Earth.

The problem is that astronomers have no way of telling which of these two scenarios is correct.

"One possibility is for the lensing system to be a planet and its moon, which if true, would be a spectacular discovery of a totally new type of system," said Wes Traub, the chief scientist for NASA's Exoplanet Exploration Program office at NASA's Jet Propulsion Laboratory, Pasadena, Calif., who was not involved in the study. "The researchers' models point to the moon solution, but if you simply look at what scenario is more likely in nature, the star solution wins."

The answer to the mystery lies in learning the distance to the circling duo. A lower-mass pair closer to Earth will produce the same kind of brightening event as a more massive pair located farther away. But once a brightening event is over, it's very difficult to take additional measurements of the lensing system and determine the distance. The true identity of the exomoon candidate and its companion, a system dubbed MOA-2011-BLG-262, will remain unknown.

In the future, however, it may be possible to obtain these distance measurements during lensing events. For example, NASA's Spitzer and Kepler space telescopes, both of which revolve around the sun in Earth-trailing orbits, are far enough away from Earth to be great tools for the parallax-distance technique.

The basic principle of parallax can be explained by holding your finger out, closing one eye after the other, and watching your finger jump back and forth. A distant star, when viewed from two telescopes spaced really far apart, will also appear to move. When combined with a lensing event, the parallax effect alters how a telescope will view the resulting magnification of starlight. Though the technique works best using one telescope on Earth and one in space, such as Spitzer or Kepler, two ground-based telescopes on different sides of our planet can also be used.

Meanwhile, surveys like MOA and the Polish Optical Gravitational Experiment Lensing Experiment, or OGLE, are turning up more and more planets. These microlensing surveys have discovered dozens of exoplanets so far, in orbit around stars and free-floating. A previous NASA-funded study, also led by the MOA team, was the first to find strong evidence for planets the size of Jupiter roaming alone in space, presumably after they were kicked out of forming planetary systems. (See http://www.jpl.nasa.gov/news/news.php?release=2011-147).

The new exomoon candidate, if real, would orbit one such free-floating planet. The planet may have been ejected from the dusty confines of a young planetary system, while keeping its companion moon in tow.