EcoHealth Alliance, a nonprofit organization that focuses on conservation and global public health issues, published a comprehensive review today examining the current state of knowledge of the deadly Ebola and Marburg virus.

The review calls for improved global surveillance strategies to combat the emergence of infectious diseases such as the recent outbreak of Ebola in West Africa that has claimed the lives of 122 people in the countries of Guinea and Liberia. According to the World Health Organization (WHO), the deadly Ebola virus can cause mortality rates up to 90 percent of those individuals who contract the disease. No cure or vaccine exists for Ebola hemorrhagic fever and public health officials are concerned about further spread of the virus in the region.

Bushmeat being prepared for cooking in Ghana. Human consumption of equatorial animals in Africa in the form of bushmeat has been linked to the transmission of diseases to people, including ebola 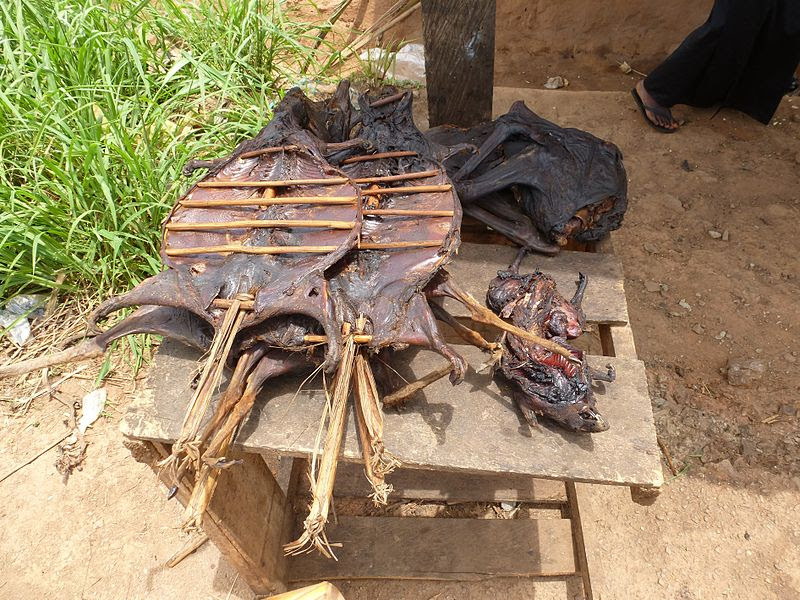 The virus is transmitted from person to person through contact with infected blood or bodily fluids, but the origin of each outbreak is ultimately linked to wildlife. The consumption of bushmeat in Guinea may possibly serve as the transmission point from wildlife to human populations for the disease. Guinea has forbidden the sale and consumption of bats, which serve as natural reservoirs of the virus, and warned against eating rats and monkeys in its effort to keep the illness from spreading.

Since the late 1970s, Ebola outbreaks have sporadically erupted in various parts of Africa, and experts report this is the worst outbreak in the past 7 years. Historically, Ebola outbreaks have been contained through quarantine and public health measures, but where and when the next outbreak will emerge still remains a mystery.

"Our scientists have developed a strategy to predict where the next new viruses from wildlife will emerge and affect people. These zoonotic viruses cause significant loss in life, create panic and disrupt the economics of an entire region," said Dr. Peter Daszak, Disease Ecologist and President of EcoHealth Alliance. "Our research shows that focusing surveillance on viruses in bats, rodents and non-human primates (a "SMART surveillance approach), and understanding what's disrupting these species' ecology is the best strategy to predict and prevent local outbreaks and pandemic disease," Daszak continued.

The study, published by EcoHealth Alliance's Dr. Kevin Olival and Dr. David Hayman from Massey University, reviewed all of the current literature on filoviruses - the class of viruses that include both Ebola and Marburg virus - and took a critical look at the ecological and virological methods needed to understand these viruses to protect human health.

As part of the study, EcoHealth Alliance's modeling team mapped the geographic distribution of all known bat hosts for these viruses, and found that Guinea and Liberia lie within the expected range of Zaire Ebola - the strain responsible for the current outbreak. The team highlighted the need for more unified and improved global surveillance strategies to monitor outbreak events around the globe in wildlife.

"We are in the beginning stages of developing early warning systems to identify disease "spillover" events from wildlife to humans before they occur, but much work remains to be done. It's an exciting time where ecology, disease surveillance, mathematical modeling, and policy are all critically converging towards the goal of pandemic prevention," said Dr. Kevin Olival, Senior Research Scientist at EcoHealth Alliance. "Our work on bat ecology is specifically important since we know that they are reservoirs for a number of viruses, including Ebola and Marburg. Bat species are critical to the health of ecosystems and disease studies must be conducted with conservation as a integral component," he continued.

EcoHealth Alliance continues to work around the globe to study and uncover the ecological drivers of disease emergence. It is estimated that 15 million people die from infectious disease each year with more than half of those afflicted being children. For that reason alone, EcoHealth Alliance's research to find the reservoirs of potentially deadly diseases in wildlife and its research to discover how disease spillovers occur make it crucially important conservation-focused work.

The journal, Viruses, published the paper entitled, Filoviruses in Bats: Current Knowledge and Future Directions, and can be accessed online for download at http://www.mdpi.com/1999-4915/6/4/1759.