Notre Dame astrophysicist Justin R. Crepp and researchers from NASA working with the Kepler space mission have detected an Earth-like planet orbiting the habitable zone of a cool star. The planet which was found using the Kepler Space Telescope has been identified as Kepler-186f and is 1.11 times the radius of the Earth. Their research titled, "An Earth-sized Planet in the Habitable Zone of a Cool Star" will be published in the journal Sciencetoday.

Kepler-186f is part of a multi-planet system around the star Kepler-186 which has five planets, one of which is in the center of the habitable zone—the region around a star within which a planet can sustain liquid water on its surface. While there have been other discoveries of Earth-sized and smaller planets, those planets have been found in orbits that are too close to their host stars for water to exist in liquid form. Findings taken from three years of data show that the intensity and spectrum of radiation from Kepler-186f indicate that the planet could have an Earth-like atmosphere and water at its surface which is likely to be in liquid form. 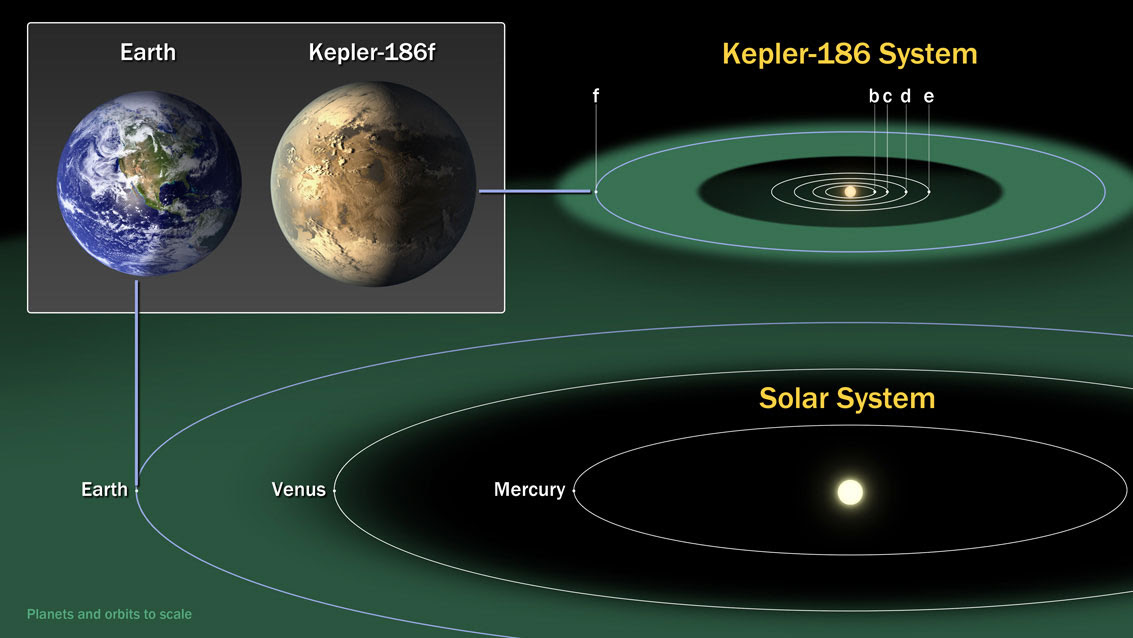 “The host star, Kepler 186, is an M1-type dwarf star, which means it will burn hydrogen forever, so there is ample opportunity to develop life around this particular star. And because it has just the right orbital period, water may exist in a liquid phase on this planet,” said Crepp, who is the Frank M. Freimann Assistant Professor of Physics in the College of Science.

"What makes this finding particularly compelling is that this Earth-sized planet, one of five orbiting this star, which is cooler than the Sun, resides in a temperate region where water could exist in liquid form," says Elisa Quintana of the SETI Institute and NASA Ames Research Center who led the paper published in the current issue of the journal Science. The region in which this planet orbits its star is called the habitable zone, as it is thought that life would most likely form on planets with liquid water.

Steve Howell, Kepler's Project Scientist and a co-author on the paper, adds that neither Kepler (nor any telescope) is currently able to directly spot an exoplanet of this size and proximity to its host star. "However, what we can do is eliminate essentially all other possibilities so that the validity of these planets is really the only viable option."

With such a small host star, the team employed a technique that eliminated the possibility that either a background star or a stellar companion could be mimicking what Kepler detected. To do this, the team obtained extremely high spatial resolution observations from the eight-meter Gemini North telescope on Mauna Kea in Hawai`i using a technique called speckle imaging, as well as adaptive optics (AO) observations from the ten-meter Keck II telescope, Gemini's neighbor on Mauna Kea. Together, these data allowed the team to rule out sources close enough to the star's line-of-sight to confound the Kepler evidence, and conclude that Kepler's detected signal has to be from a small planet transiting its host star.

The artistic concept of Kepler-186f is the result of scientists and artists collaborating to help imagine the appearance of these distant worlds. 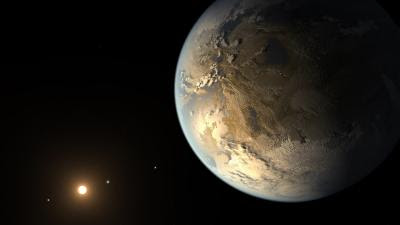 "The Keck and Gemini data are two key pieces of this puzzle," says Quintana. "Without these complementary observations we wouldn't have been able to confirm this Earth-sized planet."

The Gemini "speckle" data directly imaged the system to within about 400 million miles (about 4 AU, approximately equal to the orbit of Jupiter in our solar system) of the host star and confirmed that there were no other stellar size objects orbiting within this radius from the star. Augmenting this, the Keck AO observations probed a larger region around the star but to fainter limits. According to Quintana,

"These Earth-sized planets are extremely hard to detect and confirm, and now that we've found one, we want to search for more. Gemini and Keck will no doubt play a large role in these endeavors."

The host star, Kepler-186, is an M1-type dwarf star relatively close to our solar system, at about 500 light years and is in the constellation of Cygnus. The star is very dim, being over half a million times fainter than the faintest stars we can see with the naked eye. Five small planets have been found orbiting this star, four of which are in very short-period orbits and are very hot.

This animation depicts Kepler-186f, the first validated Earth-size planet orbiting a distant star in the habitable zone -- a range of distances from a star where liquid water might pool on the surface of an orbiting planet. The discovery of Kepler-186f confirms that Earth-size planets exist in the habitable zone of other stars and signals a significant step closer to finding a world similar to Earth. Kepler-186f is less than ten percent larger than Earth in size, but its mass and composition are not known.
Credit: Sean Raymond.

The planet designated Kepler-186f, however, is earth-sized and orbits within the star's habitable zone. The Kepler evidence for this planetary system comes from the detection of planetary transits. These transits can be thought of as tiny eclipses of the host star by a planet (or planets) as seen from the Earth. When such planets block part of the star's light, its total brightness diminishes. Kepler detects that as a variation in the star's total light output and evidence for planets. So far more than 3,800 possible planets have been detected by this technique with Kepler.
Crepp is building an instrument at Notre Dame named the iLocater that will be the first ultra-precise Doppler spectrometer to be fiber-fed and operated behind an adaptive optics system. His instrument, to be installed at the Large Binocular Telescope in Arizona, will identify terrestrial planets orbiting in the habitable zone of nearby M-dwarf stars, much closer to the Sun than Kepler-186, by achieving unprecedented radial velocity precision at near-infrared wavelengths. He and his research collaborators will also probe nearby terrestrial planets to determine what their atmospheres are made of.

“Professor Justin Crepp’s outstanding exoplanet research is helping us comprehend our complex universe and in particular those planets that are in the habitable zone. This much-anticipated discovery is shedding new light on planetary systems and their composition,” said Greg Crawford, dean of the College of Science at the University of Notre Dame.

Crepp is one of only 11 Kepler Participating Scientists in the country. He and his colleagues are advancing the goals of the Kepler Mission by seeking to find terrestrial planets comparable in size to Earth, especially those in the habitable zone of their stars where