Dangerous Ways Computer Worms Are Spreading Among Smartphones, Apps Under A New Type of Attack

Scanning 2D barcodes, finding free Wi-Fi access points, sending SMS messages, listening to music, and watching MP4 videos: these are very common activities that we do using our smartphones. Can you imagine that simply doing these things can get your smarphones infected with "worms" that can not only steal personal information from your phone, but also infect your friends's phones. 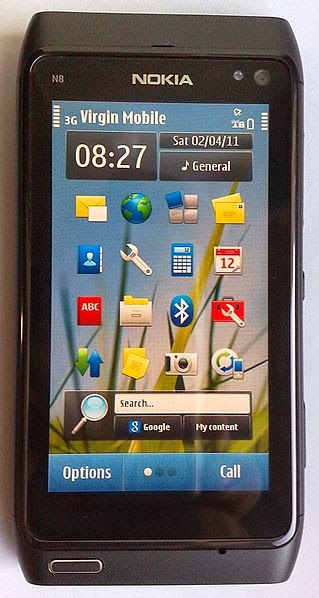 Sound scary? It will not be long before worms like this spread among smartphones. What makes the attacks feasible is an emerging technology called HTML5-based app development, and it has been rapidly gaining popularity in the mobile industry. When the adoption of this technology reaches certain threshold, attacks like this will become quite common, unless we do something to stop it. A recent Gartner report says that by 2016, fifty percent of the mobile apps will be using HTML5-based technologies.

What platforms are affected?

All major mobile systems will be affected, including Android, iOS, Blackberry, Windows Phone, etc., because they all support HTML5-based mobile apps.

A notorious problem of the HTML5-based technology is that malicious code can be easily injected into the program and get executed. That is why the Cross-Site Scripting (XSS) attack is still one of the most common attacks in the Web.

XSS attacks can only target at web applications through a single channel (i.e. the Internet), but with the adoption of the same technology in mobile devices, we have found out that a similar type of attack can not only be launched against mobile apps, it can attack from many channels, including 2D barcode, Wi-Fi scanning, Bluetooth pairing, MP3 songs, MP4 videos, SMS messages, NFC tags, Contact list, etc. As long as an HTML5-based app displays information obtained from outside or from another app, it may be a potential victim.

What Makes an App Vulnerable

First, this app should be based on the HTML5-based technology, i.e., its code (or part of its code) is written in JavaScript. If the app is written using the language native to the platform (e.g. Java for Andrid and Object-C for iOS), it is immune to this type of attacks.

The following video explains how the attack works. For full details, see their paper.


The following diagram depicts how the attack works. 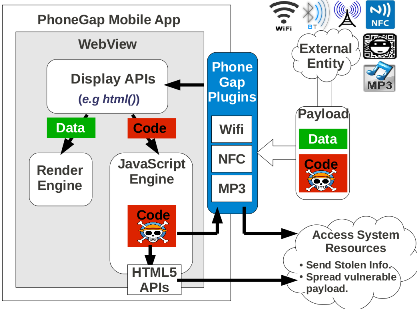 The following channels can be used by attackers to inject malicious JavaScript code into a victim's device:

The following channels can be used by another app on the same device to inject malicious JavaScript code into a vulnerable HTML5-based apps (our study was only conducted on Android; you should be able to find similar channels in other platforms):

A number of JavaScript APIs can be used for displaying data. The following table shows whether they are safe against our attacks or not. It also shows the percentage of the apps (among 764 samples that we have studied) that use these APIs at least once. We have highlighted those that are popular and unsafe. An important observation is that the use of safe APIs is not common.

PhoneGap is the most popular framework for HTML5-based app development, and our studies are mostly based on PhoneGap apps. There are other frameworks, such as RhoMobile, Appcelerator, etc. We have only tested several of them, and found them similarily vulnerable.