Wearing a fitness tracker on your wrist or clipped to your belt is so 2013.

Engineers at the University of Illinois at Urbana-Champaign and Northwestern University have demonstrated thin, soft stick-on patches that stretch and move with the skin and incorporate commercial, off-the-shelf chip-based electronics for sophisticated wireless health monitoring.

Thin, soft stick-on patches that stretch and move with the skin incorporate commercial, off-the-shelf chip-based electronics for sophisticated wireless health monitoring. The new device was developed by John A. Rogers of Illinois and Yonggang Huang of Northwestern University. 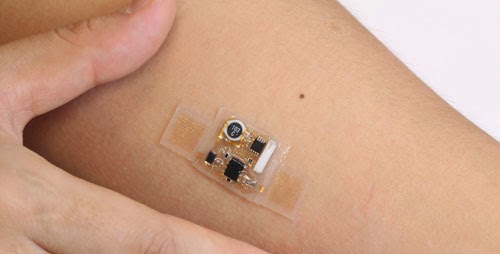 Photo by John A. Rogers

The patches stick to the skin like a temporary tattoo and incorporate a unique microfluidic construction with wires folded like origami to allow the patch to bend and flex without being constrained by the rigid electronics components. The patches could be used for everyday health tracking – wirelessly sending updates to your cellphone or computer – and could revolutionize clinical monitoring such as EKG and EEG testing – no bulky wires, pads or tape needed.

“We designed this device to monitor human health 24/7, but without interfering with a person’s daily activity,” said Yonggang Huang, theNorthwestern University professor who co-led the work with Illinois professor John A. Rogers. “It is as soft as human skin and can move with your body, but at the same time it has many different monitoring functions. What is very important about this device is it is wirelessly powered and can send high-quality data about the human body to a computer, in real time.”

The researchers did a side-by-side comparison with traditional EKG and EEG monitors and found the wireless patch performed equally to conventional sensors, while being significantly more comfortable for patients. Such a distinction is crucial for long-term monitoring, situations such as stress tests or sleep studies when the outcome depends on the patient’s ability to move and behave naturally, or for patients with fragile skin such as premature newborns.

The team will publish its design in the April 4 issue of Science. Seevideo.

The patches incorporate a unique microfluidic construction with wires folded like origami to allow the patch to bend and flex without being constrained by the rigid electronics components.

“Our original epidermal devices exploited specialized device geometries – super thin, structured in certain ways,” Rogers said. “But chip-scale devices, batteries, capacitors and other components must be re-formulated for these platforms. There’s a lot of value in complementing this specialized strategy with our new concepts in microfluidics and origami interconnects to enable compatibility with commercial off-the-shelf parts for accelerated development, reduced costs and expanded options in device types.”

The multi-university team turned to soft microfluidic designs to address the challenge of integrating relatively big, bulky chips with the soft, elastic base of the patch. The patch is constructed of a thin elastic envelope filled with fluid. The chip components are suspended on tiny raised support points, bonding them to the underlying patch but allowing the patch to stretch and move.


One of the biggest engineering feats of the patch is the design of the tiny, squiggly wires connecting the electronics components – radios, power inductors, sensors and more. The serpentine-shaped wires are folded like origami, so that no matter which way the patch bends, twists or stretches, the wires can unfold in any direction to accommodate the motion. Since the wires stretch, the chips don’t have to.

Skin-mounted devices could give those interested in fitness tracking a more complete and accurate picture of their activity level.

“When you measure motion on a wristwatch type device, your body is not very accurately or reliably coupled to the device,” said Rogers, a Swanlund Professor of Materials Science and Engineering at the U. of I. “Relative motion causes a lot of background noise. If you have these skin-mounted devices and an ability to locate them on multiple parts of the body, you can get a much deeper and richer set of information than would be possible with devices that are not well coupled with the skin. And that’s just the beginning of the rich range of accurate measurements relevant to physiological health that are possible when you are softly and intimately integrated onto the skin.”

The researchers hope that their sophisticated, integrated sensing systems could not only monitor health but also could help identify problems before the patient may be aware. For example, according to Rogers, data analysis could detect motions associated with Parkinson’s disease at its onset.

“The application of stretchable electronics to medicine has a lot of potential,” Huang said. “If we can continuously monitor our health with a comfortable, small device that attaches to our skin, it could be possible to catch health conditions before experiencing pain, discomfort and illness.”

The National Security Science and Engineering Faculty Fellowship of Energy, the Korean Foundation for International Cooperation of Science and Technology, and the Department of Energy supported this work.

Rogers directs the Frederick Seitz Materials Research Laboratory at Illinois and also is affiliated with the Beckman Institute for Advanced Science and Technology and the departments ofchemistry, of mechanical science and engineering, of bioengineering and of electrical and computer engineering.

Contacts and sources:
Liz Ahlberg
University of Illinois at Urbana-Champaign
on April 04, 2014