A Mystery Of Thermoelectrics

Materials that can be used for thermoelectric devices — those that turn a temperature difference into an electric voltage — have been known for decades. But until now there has been no good explanation for why just a few materials work well for these applications, while most others do not. Now researchers at MIT and elsewhere say they have finally found a theoretical explanation for the differences, which could lead to the discovery of new, improved thermoelectric materials.

This image shows the resonant bonding in lead telluride, one of the materials whose properties the team studied. It shows the calculated electron density distribution within the material. 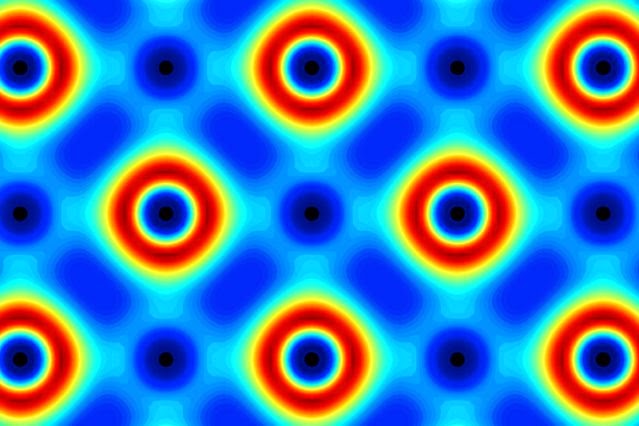 The findings — by MIT graduate student Sangyeop Lee; Gang Chen, the Carl Richard Soderberg Professor of Power Engineering; and four others — are reported this week in the journal Nature Communications.

For thermoelectric applications, Chen explains, "It is important to find a material with low thermal conductivity" — since thermoelectrics work by maintaining a temperature difference from one side of a device to the other. If a material conducts heat well, then heat leaks quickly from the hot side to the cold side, reducing its efficiency in converting heat to electricity. But predicting which materials have low conductivity — which is to say, those that are good thermal insulators — has proved elusive.

The solution to the puzzle turned out to come from work in other areas, including research to understand a different class called phase-change materials. These are being studied as a potential basis for computer memory devices that would retain information even when power is switched off. Phase-change materials change from an orderly, crystalline structure to a disordered structure in response to a change in temperature; they can then be switched back again with another temperature change.

Analysis of phase-change materials showed that they work because of a particular kind of chemical bonding, called resonant bonding — a type of bond in which electrons flip back and forth between several adjacent atoms. While resonant bonds' effects on electrical and optical properties have been studied, nobody had previously examined their effect on thermal properties, Lee says.

"There is little communication between people doing phase-change research and those doing thermoelectric research," Lee says. Interdisciplinary meetings at MIT helped lay the foundation for this research, he says: "This is an example where communication between people with different backgrounds can lead to new opportunities and boost understanding."

It turns out that electrons' "flipping" in resonant bonding leads to long-range interactions among their atoms, Chen says — producing the material's low thermal conductivity.

Using first-principles calculations to account for such behavior with resonant bonding, Lee was able to demonstrate that this effect could explain known discrepancies between similar materials that of low and high thermal conductivity.

"We found some general rules which can be used to explain other materials," Lee says.

This could lead to the discovery of new kinds of materials that also have very low thermal conductivity.

That, however, is just "one piece of the puzzle," Chen says: In order to be useful for thermoelectric devices, a material must combine low thermal conductivity with high electrical conductivity. Figuring out which materials possess that combination of characteristics will require further research, he says.

The work, which also included researchers at Rutgers University and at the University of Notre Dame, was partly supported by the U.S. Department of Energy, through the Solid State Solar-Thermal Energy Conversion Center, and by the Department of Defense.