Where Nothing Grows Anymore

Vast fields of sunflowers, sprawling pine trees and slim cypresses, as well as vineyards as far as the eye can see - these are typical memories of Tuscany for all those who have been there. By contrast, Professor Dr. Beate Michalzik from the Friedrich Schiller University of Jena and her colleagues are interested in the more barren aspects of the region in Central Italy: In a study the Jena geographers analyzed the condition of the soil in the region known as 'Crete Senesi' between Florence and Grosseto, whose hills are typically characterized by erosion - for the moment at least, because the so-called badlands of Tuscany are acutely endangered. 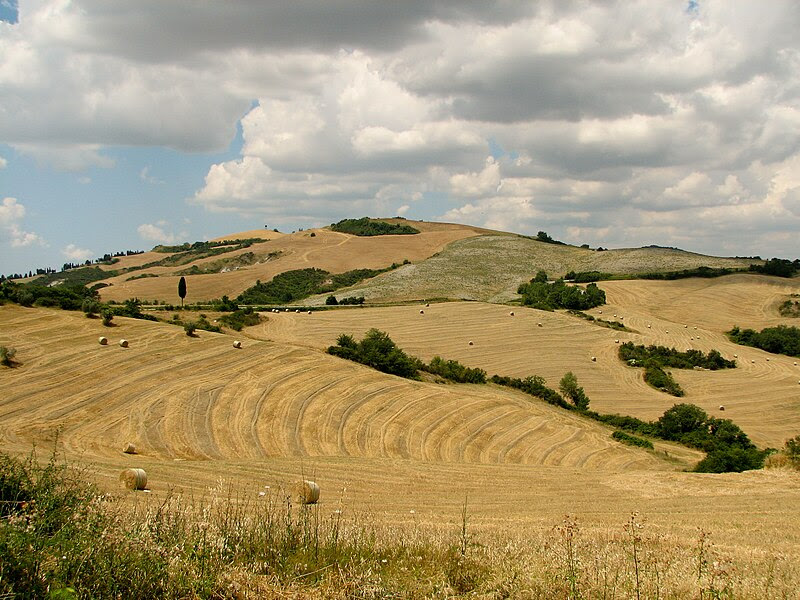 "Erosion is threatening the many small peaks known as biancane' due to their whitish color. They are marked by a bleak, strongly declining south side and a less declining north side, overgrown by herbs", Prof. Michalzik explains.

Every year one to two centimeters of the loose bare ground on the south side of the slope are being eaten away by wind and weather. But why, asked the chair of Soil Science, is there a protective blanket of sage brush, orchard grass, wild rye and curry plant only on one side of the hill and not on the other one? Michalzik and two former students from Jena tried to literally unearth the answer to this question. As Peggy Bierbaß, Michael Wündsch and Beate Michalzik write in the science magazine 'Catena': this typically Tuscan landscape is the result of an intense interplay of the condition of the soil, the vegetation and the land-use (DOI: 10.1016/j.catena.2013.08.003).

In the Val d'Orcia, about 30 kilometers south of Siena, the Jena students and their supervisors took 12 samples of the soil of a biancana hill within the context of fieldwork. In the laboratory they analyzed their chemical, physical and hydrological qualities and discovered that the concentration of sodium in the soil is crucial for its stability. "In the barren part of the hills the concentration of sodium is distinctly higher than on the vegetated side," Michael Wündsch explains the central finding. The high concentration of sodium lowers the coagulation of the individual layers of clay and therefore they are more easily affected by the rain. The result: less stability and more erosion.

A targeted greening of the barren surfaces of the biancane hills could possibly stabilize them. However, Beate Michalzik explains, this wouldn't stop the gradual disappearance of this landscape either, as can be seen by the growing agricultural use of the region. "In the last decades bigger and bigger stretches of land have been used for wheat growing, which takes away the unique character of this landscape," states Michalzik. According to today's estimates, the badlands of Tuscany will have disappeared completely in 35 to 40 years.