A University of Alberta diamond scientist has found the first terrestrial sample of a water-rich gem that yields new evidence about the existence of large volumes of water deep beneath the Earth.

An international team of scientists led by Graham Pearson, Canada Excellence Research Chair in Arctic Resources at the U of A, has discovered the first-ever sample of a mineral called ringwoodite. Analysis of the mineral shows it contains a significant amount of water—1.5 per cent of its weight—a finding that confirms scientific theories about vast volumes of water trapped 410 to 660 kilometres beneath the Earth, between the upper and lower mantle.

Graham Pearson holds a diamond that contains the water-rich mineral "ringwoodite," a new discovery that yields new clues about the presence of large amounts of water deep beneath the Earth. 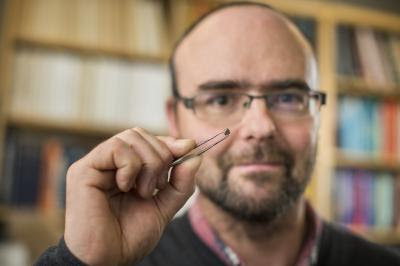 "This sample really provides extremely strong confirmation that there are local wet spots deep in the Earth in this area," said Pearson, a professor in the Faculty of Science, whose findings were published March 13 in Nature. "That particular zone in the Earth, the transition zone, might have as much water as all the world's oceans put together."

Ringwoodite is a form of the mineral peridot, believed to exist in large quantities under high pressures in the transition zone. Ringwoodite has been found in meteorites but, until now, no terrestrial sample has ever been unearthed because scientists haven't been able to conduct fieldwork at extreme depths.

Pearson's sample was found in 2008 in the Juina area of Mato Grosso, Brazil, where artisan miners unearthed the host diamond from shallow river gravels. The diamond had been brought to the Earth's surface by a volcanic rock known as kimberlite—the most deeply derived of all volcanic rocks.

The first terrestrial discovery of ringwoodite by University of Alberta scientist Graham Pearson confirms the presence of massive amounts of water 400 to 700 km beneath the Earth's surface. 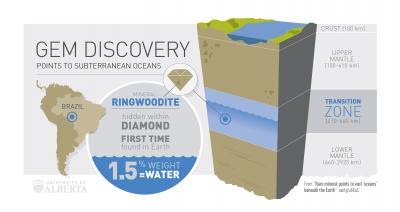 The discovery that almost wasn't

Pearson said the discovery was almost accidental in that his team had been looking for another mineral when they purchased a three-millimetre-wide, dirty-looking, commercially worthless brown diamond. The ringwoodite itself is invisible to the naked eye, buried beneath the surface, so it was fortunate that it was found by Pearson's graduate student, John McNeill, in 2009.

"It's so small, this inclusion, it's extremely difficult to find, never mind work on," Pearson said, "so it was a bit of a piece of luck, this discovery, as are many scientific discoveries."

The sample underwent years of analysis using Raman and infrared spectroscopy and X-ray diffraction before it was officially confirmed as ringwoodite. The critical water measurements were performed at Pearson's Arctic Resources Geochemistry Laboratory at the U of A. The laboratory forms part of the world-renowned Canadian Centre for Isotopic Microanalysis, also home to the world's largest academic diamond research group.

For Pearson, one of the world's leading authorities in the study of deep Earth diamond host rocks, the discovery ranks among the most significant of his career, confirming about 50 years of theoretical and experimental work by geophysicists, seismologists and other scientists trying to understand the makeup of the Earth's interior.

Scientists have been deeply divided about the composition of the transition zone and whether it is full of water or desert-dry. Knowing water exists beneath the crust has implications for the study of volcanism and plate tectonics, affecting how rock melts, cools and shifts below the crust.

"One of the reasons the Earth is such a dynamic planet is the presence of some water in its interior," Pearson said. "Water changes everything about the way a planet works."

Contacts and sources:
Bryan Alary
University of Alberta
on March 12, 2014