The findings suggest that conscious awareness may hinder our ability to detect whether someone is lying, perhaps because we tend to seek out behaviors that are supposedly stereotypical of liars, like averted eyes or fidgeting. But those behaviors may not be all that indicative of an untrustworthy person.

“Our research was prompted by the puzzling but consistent finding that humans are very poor lie detectors, performing at only about 54% accuracy in traditional lie detection tasks,” explains psychological scientist and study author Leanne ten Brinke, postdoctoral fellow at the University of California, Berkeley’s Haas School of Business. 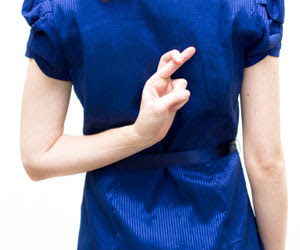 That’s hardly better than chance, as if participants were simply guessing whether the person was lying. And it’s a finding that seems at odds with the fact that humans are typically sensitive to how others are feeling, what they’re thinking, and what their personalities are like.

Along with UC Berkeley colleague Dayna Stimson and Berkeley-Haas Asst. Prof. Dana Carney, ten Brinke hypothesized that these seemingly paradoxical findings may be accounted for by unconscious processes:

The researchers first had 72 participants watch videos of “suspects” in a mock-crime interview. Some of the suspects in the videos had actually stolen a $100 bill from a bookshelf, whereas others had not. However, all of the suspects were instructed to tell the interviewer they had not stolen the money. In doing so, one group of suspects must have been lying, whereas the other group must have been telling the truth.

When the 72 participants were asked to say which suspects they thought were lying and which were telling the truth, they were pretty inaccurate: They were only able to detect liars 43% of the time, and truth-tellers only 48% of the time.

But the researchers also employed widely-used behavioral reaction time tests (one of which is called the Implicit Association Test or IAT) to probe participants’ more automatic instincts towards the suspects.

A second experiment confirmed these findings, providing evidence that people may have some intuitive sense, outside of conscious awareness, that detects when someone is lying.

“These results provide a new lens through which to examine social perception, and suggest that – at least in terms of detection of lies – unconscious measures may provide additional insight into interpersonal accuracy,” says ten Brinke.

Data concerning the accuracy results reported in Experiments 1 and 2 can be found at the following URLs: http://www.leannetenbrinke.com/publications.html and http://faculty.haas.berkeley.edu/dana_carney/vita.html.

The videos used and the data that describe the cortisol reactivity, self-reported stress, and nonverbal cues to deception of the liars and truth tellers in the mock-crime scenario are available from the authors. The complete Open Practices Disclosure for this article can be found at http://pss.sagepub.com/content/by/supplemental-data.

This article has received badges for Open Data and Open Materials. More information about the badges can be found at https://osf.io/tvyxz/wiki/view/ and http://pss.sagepub.com/content/25/1/3.full/.