Changes in the sun's energy output may have led to marked natural climate change in Europe over the last 1000 years, according to researchers at Cardiff University.

Scientists studied seafloor sediments to determine how the temperature of the North Atlantic and its localised atmospheric circulation had altered. Warm surface waters flowing across the North Atlantic, an extension of the Gulf Stream, and warm westerly winds are responsible for the relatively mild climate of Europe, especially in winter. Slight changes in the transport of heat associated with these systems can led to regional climate variability, and the study findings matched historic accounts of climate change, including the notoriously severe winters of the 16th and 18th centuries which pre-date global industrialization.

This is a composite created from three images received from MODIS instruments carried on NASA's Terra and Aqua polar orbiting satellites. The images were received at the Dundee Satellite Receiving Station at 1151, 1205 and 1342 UTC on 7th Jan. 2010. 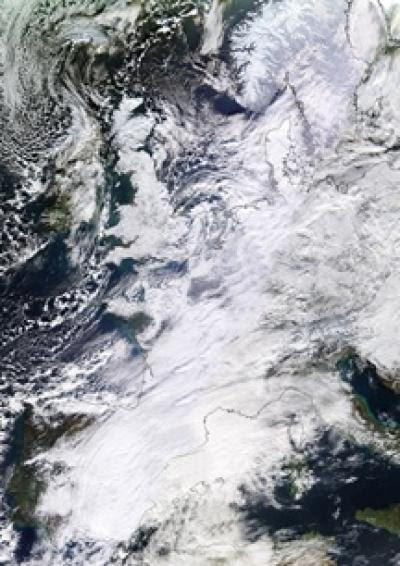 The study found that changes in the Sun's activity can have a considerable impact on the ocean-atmospheric dynamics in the North Atlantic, with potential effects on regional climate.

Predictions suggest a prolonged period of low sun activity over the next few decades, but any associated natural temperature changes will be much smaller than those created by human carbon dioxide emissions, say researchers.

The study, led by Cardiff University scientists, in collaboration with colleagues at the University of Bern, is published today in the journal Nature Geoscience.

Dr Paola Moffa-Sanchez, lead author from Cardiff University School of Earth and Ocean Sciences, explained: "We used seafloor sediments taken from south of Iceland to study changes in the warm surface ocean current. This was done by analysing the chemical composition of fossilised microorganisms that had once lived in the surface of the ocean. These measurements were then used to reconstruct the seawater temperature and the salinity of this key ocean current over the past 1000 years."

The results of these analyses revealed large and abrupt temperature and salinity changes in the north-flowing warm current on time-scales of several decades to centuries. Cold ocean conditions were found to match periods of low solar energy output, corresponding to intervals of low sunspot activity observed on the surface of the sun. Using a physics-based climate model, the authors were able to test the response of the ocean to changes in the solar output and found similar results to the data.

"By using the climate model it was also possible to explore how the changes in solar output affected the surface circulation of the Atlantic Ocean," said Prof Ian Hall, a co-author of the study. "The circulation of the surface of the Atlantic Ocean is typically tightly linked to changes in the wind patterns. Analysis of the atmosphere component in the climate model revealed that during periods of solar minima there was a high-pressure system located west of the British Isles. This feature is often referred to as atmospheric blocking, and it is called this because it blocks the warm westerly winds diverting them and allowing cold Arctic air to flow south bringing harsh winters to Europe, such as those recently experienced in 2010 and 2013."

Meteorological studies have previously found similar effects of solar variability on the strength and duration of atmospheric winter blockings over the last 50 years, and although the exact nature of this relationship is not yet clear, it is thought to be due to complex processes happening in the upper layers of the atmosphere known as the stratosphere.

Dr Paola Moffa-Sanchez added: "In this study we show that this relationship is also at play on longer time-scales and the large ocean changes, recorded in the microfossils, may have helped sustain this atmospheric pattern. Indeed we propose that this combined ocean-atmospheric response to solar output minima may help explain the notoriously severe winters experienced across Europe between the 16th and 18th centuries, so vividly depicted in many paintings, including those of the famous London Frost Fairs on the River Thames, but also leading to extensive crop failures and famine as corroborated in the record of wheat prices during these periods."

The study concludes that although the temperature changes expected from future solar activity are much smaller than the warming from human carbon dioxide emissions, regional climate variability associated with the effects of solar output on the ocean and atmosphere should be taken into account when making future climate projections.