A new time-lapse animation of data from NOAA's GOES-East satellite provides a good picture of why the U.S. East Coast experienced a snowier than normal winter. The new animation shows the movement of storms from January 1 to March 24.

This new animation of NOAA's GOES-East satellite imagery shows the movement of winter storms from January 1 to March 24 making for a snowier-than-normal winter along the U.S. East coast and Midwest.

The movie of mid-day views from NOAA's GOES-East satellite ends three days after the vernal equinox. The vernal, or spring, equinox in the Northern Hemisphere occurred on March 20 at 12:57 p.m. EDT and marked the meteorological arrival of spring.

To create the video and imagery, NASA/NOAA's GOES Project takes the cloud data from NOAA's GOES-East satellite and overlays it on a true-color image of land and ocean created by data from the Moderate Resolution Imaging Spectroradiometer, or MODIS, instrument that flies aboard NASA's Aqua and Terra satellites. Together, those data created the entire picture of the storm and show its movement. After the storm system passes, the snow on the ground becomes visible. 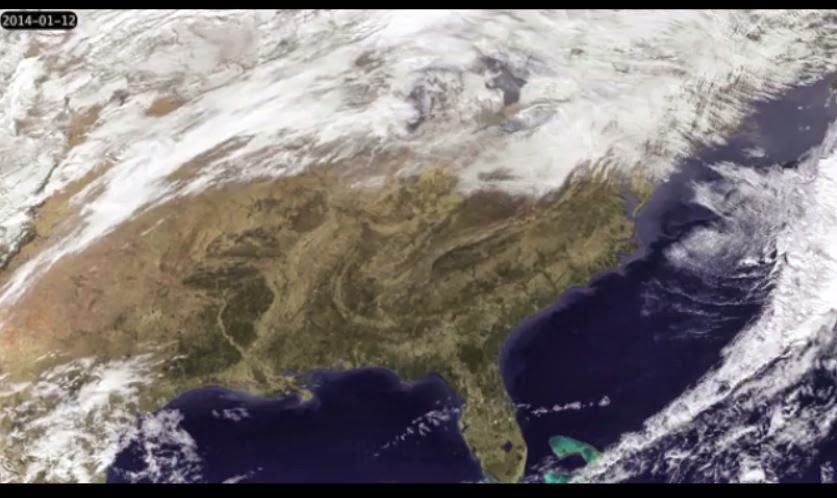 According to NOAA's National Weather Service (NWS), as of the first day of spring Washington, D.C. had received 30.3 inches of snow for the 2013-2014 winter season. Washington's average winter snowfall is 15.3 inches, so the snowfall for the Nation's Capital was almost double that, exceeding it by 15.0 inches. An early spring snow on March 25 is expected to add to that total.

Further north in Boston, Mass. snowfall totals were even higher. The NWS reported that since July 1, 2013, 58.6 inches of snow had fallen in Boston. The average snowfall is 40.8 inches, so Boston was 17.8 inches over normal snowfall.

The big snow story this winter has been across the Great Lakes region which has also seen record amounts of snowfall. According to NWS in Buffalo, the city has received 121.7 inches, or more than 10 feet of snow, as of March 24. Chicago has received 80 inches of snow which is more than double their annual snowfall amount of 34.4 inches.

GOES satellites provide the kind of continuous monitoring necessary for intensive data analysis. Geostationary describes an orbit in which a satellite is always in the same position with respect to the rotating Earth. This allows GOES to hover continuously over one position on Earth's surface, appearing stationary. As a result, GOES provide a constant vigil for the atmospheric "triggers" for severe weather conditions such as tornadoes, flash floods, hail storms and hurricanes.