Rift valleys are large depressions formed by tectonic stretching forces. Volcanoes often occur in rift valleys, within the rift itself or on the rift flanks as e.g. in East Africa. The magma responsible for this volcanism is formed in the upper mantle and ponds at the boundary between crust and mantle. For many years, the question of why volcanoes develop outside the rift zone in an apparently unexpected location offset by tens of kilometers from the source of molten magma directly beneath the rift has remained unanswered. 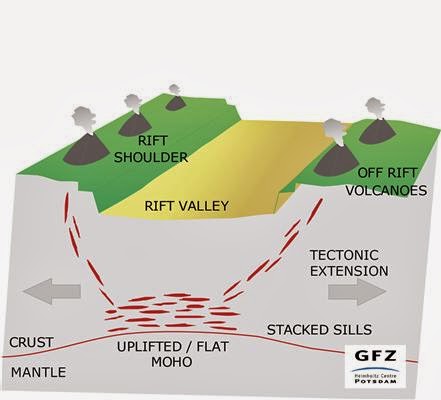 A team of scientists from the GFZ German Research Centre for Geosciences, University of Southampton and University Roma Tre (Italy) have shown that the pattern of stresses in the crust changes when the crust thins due to stretching and becomes gravitationally unloaded. As a consequence of this stress pattern, the path of the magma pockets ascending from the ponding zone is deviated diagonally to the sides of the rift. Eventually, the magma pockets emerge at distances of tens, sometime hundreds of kilometers from the rift axis, creating the so-called off-rift volcanoes.

The scientists used a numerical model that simulates the propagation of the magma pockets, called dikes, to demonstrate a previously unknown control of rift topography on the trajectory of magma transport. The surface location of the volcanoes depend on the geometry of the rift valleys, explains GFZ researcher Francesco Maccaferri: “We find that in broad, shallow rift valleys, the magma will ascend vertically above the source of magma. In deep, narrow valleys the modification of the stress pattern is very intense and the magma path is strongly deviated.”

Newly exposed fault scarp that formed from dike induced faulting during the September 2005 rifting event in the Dabbahu segment in the Afar rift. 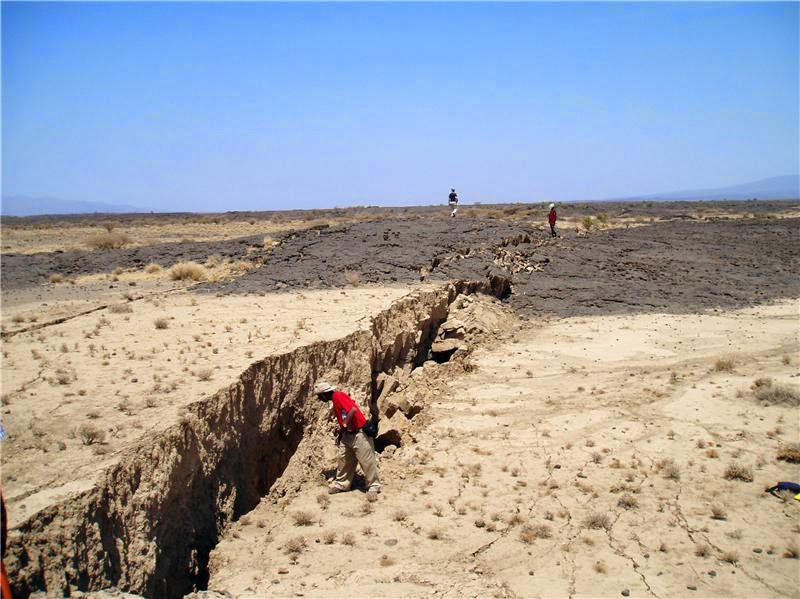 Since in the latter case the initial path of the dikes is almost horizontal, in extreme cases the magma can arrest as a horizontal intrusion and form a pile of stacked sheet-like bodies without any surface volcanism. This is confirmed in rift valleys around the world. The phenomenon is a dynamic one: “If the tectonic extension continues and the rift reaches a mature stage of evolution, the pile of the magma sheets can reach the shallow crust. Our model predicts correctly that additional magma-filled sheets will then orient vertically and propagate laterally along the middle of the rift”,adds Eleonora Rivalta from GFZ.

Rift valleys are one of the main tectonic features of our planet. They form both between diverging tectonic plates or within plates which undergo tectonic extension. The generation of magma at depth beneath rift valleys and the divergence of the plates through magma intrusions has been an object of research for tens of years, but the link between deep sources and surface volcanism have previously been missing. The new model may be invoked to explain both off-rift volcanism or the lack of volcanism in million years old rift valleys in Europe.