The evolution of the first animals may have oxygenated the earth's oceans – contrary to the traditional view that a rise in oxygen triggered their development.

New research led by the University of Exeter contests the long held belief that oxygenation of the atmosphere and oceans was a pre-requisite for the evolution of complex life forms.

Sponges were the first animals to evolve and may have helped drive oceanic oxygenation in the Neoproterozoic through their active pumping and filter-feeding activities. 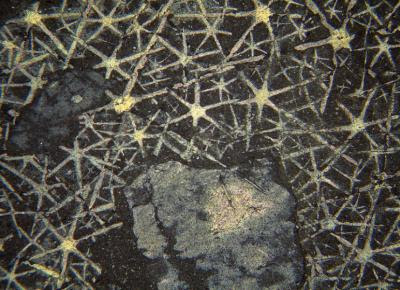 The study, published in the leading journal Nature Geoscience, builds on the recent work of scientists in Denmark who found that sponges – the first animals to evolve – require only small amounts of oxygen.

Professor Tim Lenton of the University of Exeter, who led the new study, said: "There had been enough oxygen in ocean surface waters for over 1.5 billion years before the first animals evolved, but the dark depths of the ocean remained devoid of oxygen. We argue that the evolution of the first animals could have played a key role in the widespread oxygenation of the deep oceans. This in turn may have facilitated the evolution of more complex, mobile animals."

The researchers considered mechanisms by which the deep ocean could have been oxygenated during the Neoproterozoic Era (from 1,000 to 542 million years ago) without requiring an increase in atmospheric oxygen.

Crucial to determining oxygen levels in the deep ocean is the balance of oxygen supply and demand. Demand for oxygen is created by the sinking of dead organic material into the deep ocean. The new study argues that the first animals reduced this supply of organic matter – both directly and indirectly.

Sponges feed by pumping water through their bodies, filtering out tiny particles of organic matter from the water, and thus helping oxygenate the shelf seas that they live in. This naturally selects for larger phytoplankton – the tiny plants of the ocean – which sink faster, also reducing oxygen demand in the water.

By oxygenating more of the bottom waters of shelf seas, the first filter-feeding animals inadvertently increased the removal of the essential nutrient phosphorus in the ocean. This in turn reduced the productivity of the whole ocean ecosystem, suppressing oxygen demand and thus oxygenating the deep ocean.

A more oxygen-rich ocean created ideal conditions for more mobile animals to evolve, because they have a higher requirement for oxygen. These included the first predatory animals with guts that started to eat one another, marking the beginning of a modern marine biosphere, with the type of food webs we are familiar with today.

Professor Lenton added: "The effects we predict suggest that the first animals, far from being a passive response to rising atmospheric oxygen, were the active agents that oxygenated the ocean around 600 million years ago. They created a world in which more complex animals could evolve, including our very distant ancestors."

Professor Simon Poulton of the University of Leeds, who is a co-author of the study, added: ″This study provides a plausible mechanism for ocean oxygenation without the requirement for a rise in atmospheric oxygen. It therefore questions whether the long-standing belief that there was a major rise in atmospheric oxygen at this time is correct. We simply don't know the answer to this at present, which is ultimately key to understanding how our planet evolved to its current habitable state. Geochemists need to come up with new ways to decipher oxygen levels on the early Earth.″

The article, 'Co-evolution of Eukaryotes and Ocean Oxygenation in the Neoproterozoic' by Timothy M. Lenton, Richard A. Boyle, Simon W. Poulton, Graham A. Shields-Zhou and Nicholas J. Butterfield is published in Nature Geoscience doi: 10.1038/ngeo2108

Contacts and sources:
Eleanor Gaskarth
University of Exeter
on March 10, 2014

Email ThisBlogThis!Share to TwitterShare to FacebookShare to Pinterest
Labels: evolution, Life, oxygenation of the atmosphere and oceans