An international team of astronomers exploring the disk of gas and dust around a nearby star have uncovered a compact cloud of poisonous gas formed by ongoing rapid-fire collisions among a swarm of icy, comet-like bodies. The researchers suggest the comet swarm is either the remnant of a crash between two icy worlds the size of Mars or frozen debris trapped and concentrated by the gravity of an as-yet-unseen planet.

Using the Atacama Large Millimeter/submillimeter Array (ALMA) in Chile, the researchers mapped millimeter-wavelength light from dust and carbon monoxide (CO) molecules in a disk surrounding the bright star Beta Pictoris. Located about 63 light-years away and only 20 million years old, the star hosts one of the closest, brightest and youngest debris disks known, making it an ideal laboratory for studying the early development of planetary systems.

NASA Goddard's Aki Roberge explains how observations with the Atacama Large Millimeter/submillimeter Array in Chile tell us about poison gas, comet swarms and a hypothetical planet around Beta Pictoris.

"Although toxic to us, carbon monoxide is one of many gases found in comets and other icy bodies," said team member Aki Roberge, an astrophysicist at NASA's Goddard Space Flight Center in Greenbelt, Md. "In the rough-and-tumble environment around a young star, these objects frequently collide and generate fragments that release dust, icy grains and stored gases."

The ALMA images reveal a vast belt of carbon monoxide located at the fringes of the Beta Pictoris system. Much of the gas is concentrated in a single clump located about 8 billion miles (13 billion kilometers) from the star, or nearly three times the distance between the planet Neptune and the sun. The total amount of CO observed, the scientists say, exceeds 200 million billion tons, equivalent to about one-sixth the mass of Earth’s oceans.

The presence of all this gas is a clue that something interesting is going on because ultraviolet starlight breaks up CO molecules in about 100 years, much faster than the main cloud can complete a single orbit around the star. "So unless we are observing Beta Pictoris at a very unusual time, then the carbon monoxide we observed must be continuously replenished," said Bill Dent, a researcher at the Joint ALMA Office in Santiago, Chile, and the lead author of a paper published by Science Express on March 6.

This artist's concept illustrates the preferred model for explaining ALMA observations of Beta Pictoris. At the outer fringes of the system, the gravitational influence of a hypothetical giant planet (bottom left) captures comets into a dense, massive swarm (right) where frequent collisions occur. 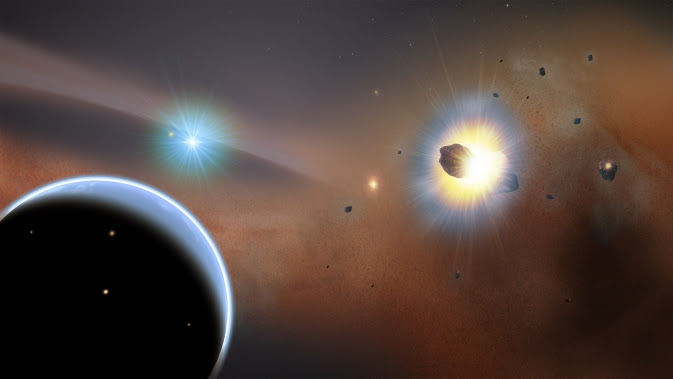 Dent and his team calculate that to offset the destruction of CO molecules around Beta Pictoris, a large comet must be completely destroyed every five minutes. Only an unusually massive and compact swarm of comets could support such an astonishingly high collision rate.

Because we view the disk nearly edge-on, the ALMA data cannot determine whether the carbon monoxide belt has a single concentration of gas or two on opposite sides of the star. Further studies of the gas cloud's orbital motion will clarify the situation, but current evidence favors a two-clump scenario.

In our own solar system, Jupiter's gravity has trapped thousands of asteroids in two groups, one leading and one following the planet as it travels around the sun. A giant planet located in the outer reaches of the Beta Pictoris system likewise could corral comets into a pair of tight, massive swarms.

The ALMA image of carbon monoxide around Beta Pictoris (above) can be deprojected (below) to simulate a view looking down on the system, revealing the large concentration of gas in its outer reaches. For comparison, orbits within the solar system are shown for scale. 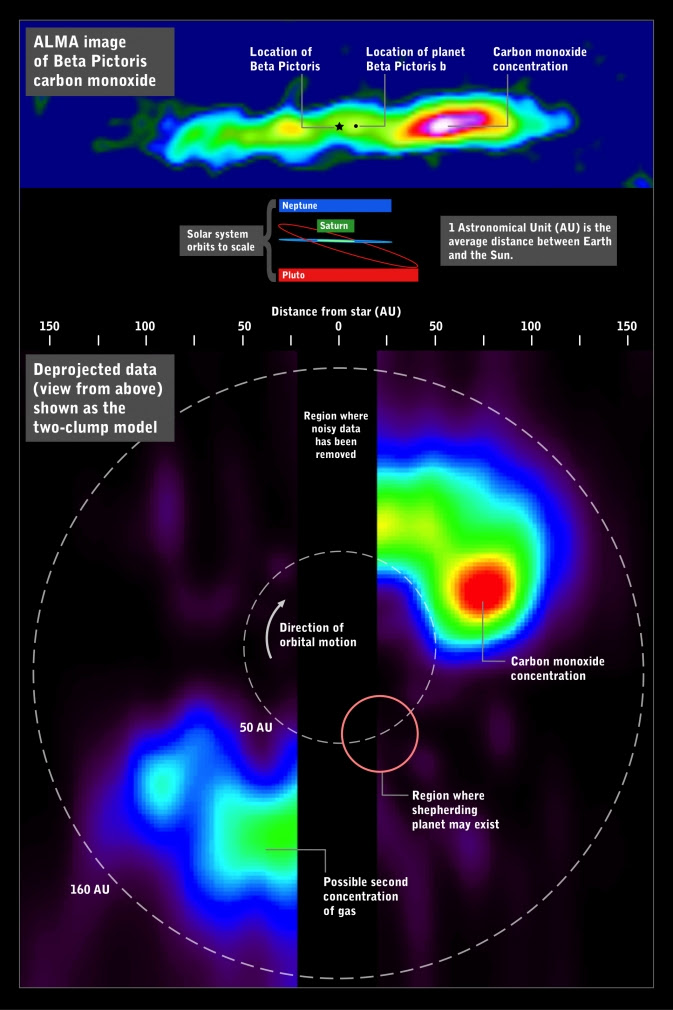 "Detailed dynamical studies are now under way, but at the moment we think this shepherding planet would be around Saturn's mass and positioned near the inner edge of the CO belt," said coauthor Mark Wyatt, an astronomer at the University of Cambridge in England.

Astronomers have directly imaged one giant planet, Beta Pictoris b, with a mass several times greater than Jupiter, orbiting much closer to the star. While it would be unusual for a giant planet to form up to 10 times farther away, as required to shepherd the massive comet clouds, the hypothetical planet could have formed near the star and migrated outward as the young disk underwent changes.

"We think the Beta Pictoris comet swarms formed when the hypothetical planet migrated outward, sweeping icy bodies into resonant orbits," explained Wyatt. When the orbital periods of the comets matched the planet's in some simple ratio – say, two orbits for every three of the planet – the comets received a nudge from the planet at the same location every orbit. Like regular pushes on a child's swing, these accelerations amplify over time and work to confine the comets in a small region.

If, however, the gas actually turns out to reside in a single clump, the researchers suggest an alternative scenario. A crash between two Mars-sized icy planets about half a million years ago would account for the comet swarm, with frequent ongoing collisions among the fragments gradually releasing carbon monoxide gas.

Either way, Beta Pictoris clearly has a fascinating story to tell, and ALMA's keen vision will help astronomers delve ever deeper into the tale.

Email ThisBlogThis!Share to TwitterShare to FacebookShare to Pinterest
Labels: astronomy, Beta Pictoris b