Neanderthals Challenge The Origins Of Speech, Could Speak Like Modern Humans Says Study

We humans like to think of ourselves as unique for many reasons, not least of which being our ability to communicate with words. But ground-breaking research by an expert from the University of New England shows that our ‘misunderstood cousins,’ the Neanderthals, may well have spoken in languages not dissimilar to the ones we use today.

Reconstruction of the head of the Shanidar 1 fossil, a Neanderthal male who lived c. 70,000 years ago

Pinpointing the origin and evolution of speech and human language is one of the longest running and most hotly debated topics in the scientific world. It has long been believed that other beings, including the Neanderthals with whom our ancestors shared the Earth for thousands of years, simply lacked the necessary cognitive capacity and vocal hardware for speech.

Associate Professor Stephen Wroe, a zoologist and palaeontologist from UNE, along with an international team of scientists and the use of 3D x-ray imaging technology, made the revolutionary discovery challenging this notion based on a 60,000 year-old Neanderthal hyoid bone discovered in Israel in 1989.

“To many, the Neanderthal hyoid discovered was surprising because its shape was very different to that of our closest living relatives, the chimpanzee and the bonobo. However, it was virtually indistinguishable from that of our own species. This led to some people arguing that this Neanderthal could speak,” A/Professor Wroe said.

“The obvious counterargument to this assertion was that the fact that hyoids of Neanderthals were the same shape as modern humans doesn’t necessarily mean that they were used in the same way. With the technology of the time, it was hard to verify the argument one way or the other.”

Skeleton and reconstruction of the La Ferrassie 1 Neanderthal man from the National Museum of Nature and Science. 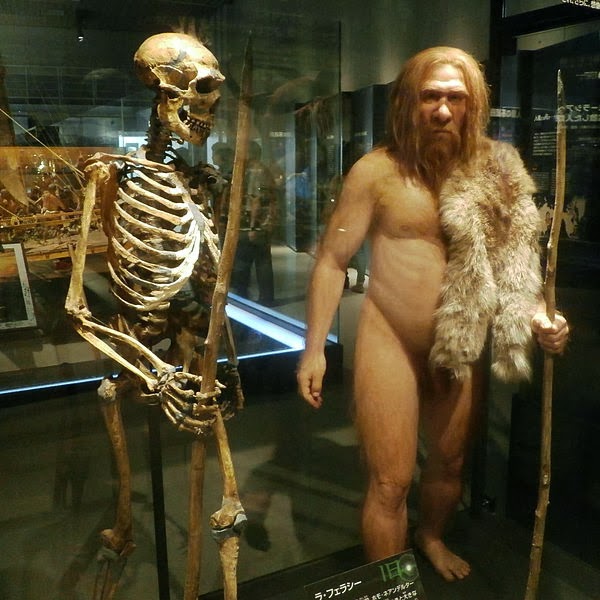 However advances in 3D imaging and computer modelling allowed A/Professor Wroe’s team to revisit the question.

“By analyzing the mechanical behavior of the fossilized bone with micro x-ray imaging, we were able to build models of the hyoid that included the intricate internal structure of the bone. We then compared them to models of modern humans. Our comparisons showed that in terms of mechanical behavior, the Neanderthal hyoid was basically indistinguishable from our own, strongly suggesting that this key part of the vocal tract was used in the same way.

“From this research, we can conclude that it’s likely that the origins of speech and language are far, far older than once thought.”