Every second, our bodies and the objects around us are struck by cosmic rays that come mostly from sources deep in space. The highest-energy cosmic rays are the most energetic particles in the universe—far more powerful than anything humans could produce— but their origins are a mystery.

This image shows the most detailed image of particle jets erupting from a supermassive black hole in the nearby galaxy of Centaurus A. The image was created by merging X-ray data (blue) from NASA’s Chandra X-ray Observatory with microwave (orange) and visible images. 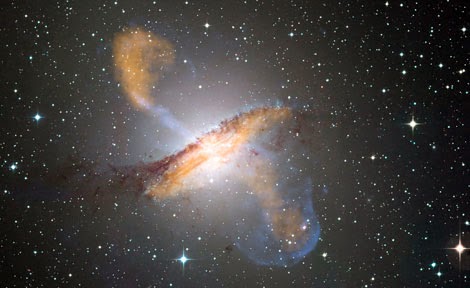 University of Chicago astrophysicist Angela Olinto is helping to unravel that stubborn riddle by leading the United States collaboration on an international project to deploy a cosmic ray telescope on the International Space Station later this decade. The instrument will peer back at Earth to detect the collisions of cosmic rays with the atmosphere, which could shed light on what produces the enigmatic particles.

“This first space mission for the highest-energy particles may pioneer the space exploration of the Earth’s atmosphere as a giant particle detector,” wrote Olinto, the Homer J. Livingston Professor in Astronomy & Astrophysics, in Il Nuovo Saggiatore, an Italian science magazine.

Shown above is the shower created when a proton hits the atmosphere. (Muons coded in red, photons in yellow, electrons/positrons in purple) 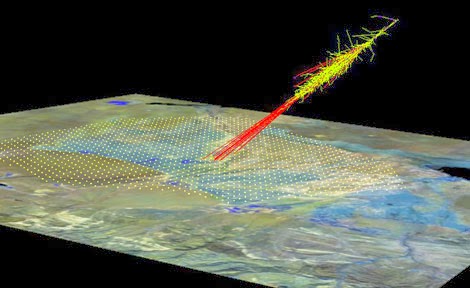 Funded by a $4.4 million grant from NASA, Olinto and her colleagues are part of a 15-nation effort to build the 2.5-meter ultraviolet telescope, called theExtreme Universe Space Observatory.

No one knows what they will find. Ultra high-energy cosmic rays may come from supermassive black holes at the centers of nearby galaxies. A far less likely possibility is that they are decaying particles left over from the Big Bang. These subatomic particles hit the atmosphere with the energy of a tennis ball traveling at 167 miles an hour. The impact produces a giant cascade of many tens of billions of secondary particles, which to date have been observed only from Earth-based detectors.

A 1 TeV gamma ray shower viewed from (below) the ground. 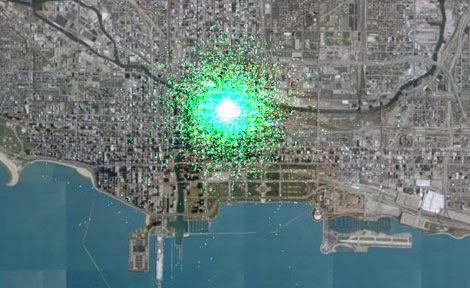 “The mechanism behind this extreme acceleration challenges our imagination,” Olinto says.

UChicago has a long history of research in cosmic rays, including more than half a century of balloon- and spacecraft-borne experiments conducted by scientists in the Enrico Fermi Institute. Austrian physicist Victor Hess discovered cosmic rays in 1912; surprisingly, he discovered that cosmic-ray intensity increased with altitude.

That chance discovery showcases “a beautiful aspect of science,” says 1980 Nobel laureate James Cronin, University Professor Emeritus in Physics. “The discovery was that radiation is coming from outer space into Earth. One had no idea what this radiation was, but nevertheless it was there.”
Clashing Nobel laureates

The Extreme Universe Space Observatory is scheduled for deployment in 2017 aboard the Japanese Experiment Module of the International Space Station. 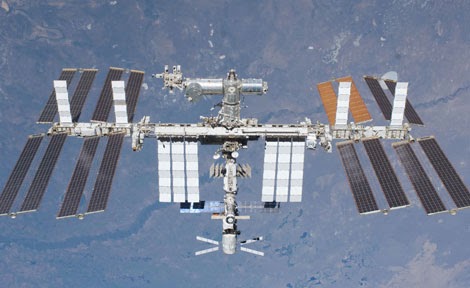 Originally called höhenstrahlung—German for “radiation from above"—the radiation has been known as cosmic rays since Robert A. Millikan coined the term in 1928. Millikan later would trade barbs with his former UChicago student and fellow Nobel laureate, Arthur Holly Compton, over their conflicting cosmic-ray data in a quarrel that made the front page of The New York Times.

“Millikan retorts hotly to Compton in cosmic ray clash,” reported the Times on Dec. 31, 1932. Millikan, a UChicago faculty member from 1898 to 1921, asserted that cosmic rays consisted of gamma radiation. Compton, who was on the faculty from 1923 to 1945, believed that cosmic rays were charged particles. Compton was correct, but Millikan never did revise his opinion.

Cosmic rays pose little risk to organisms on Earth, where the atmosphere and the planet’s magnetic field offer protection. But cosmic rays are a factor in the planning of extended interplanetary missions, where astronauts could be exposed to dangerous levels of radiation. The particles also can affect consumer electronics, causing subtle errors when they strike integrated circuits and other components.

The cosmic ray telescope that scientists hope to install aboard the space station will look down, to detect the giant particle cascades that high-energy cosmic rays produce when they enter Earth’s atmosphere. The late Pierre Auger discovered this phenomenon in 1938. A few years later Auger continued his research during a visit to UChicago.

Cronin and his associates would spend years planning and establishing a sprawling cosmic ray observatory in Argentina that they named after Auger. The Pierre Auger Observatory began collecting data in 2004. “We have solved many open questions from the last century, but we didn’t find the source of the highest-energy cosmic rays,” Olinto says.

Despite its vast scale, the Auger Observatory can only detect subatomic particle interactions occurring in the atmosphere directly above its telescopes. But with the installation of a downward-looking ultraviolet telescope on the International Space Station, the entire atmosphere becomes a particle detector. The cosmic processes that produce those particles far exceed the capabilities of mankind’s most powerful accelerator, the Large Hadron Collider in Switzerland. Space-based observations offer a way to overcome the constraints of man-made devices.

“In my opinion, it’s the way to the future,” Olinto says.
Coming full circle

But cosmic ray research and particle physics went their separate ways in the 1950s. Scientists began building powerful particle accelerators, establishing the field of high-energy particle physics. “The other branch was to make measurements above the atmosphere, and that led to what’s now called particle astrophysics, gamma-ray astronomy, and X-ray astronomy,” Müller says.

The hotspot could be a temporary phenomenon that will disappear before the Extreme Observatory begins operating on the space station. “If it persists, then we should be able to confirm that this is the first source ever measured,” Olinto says. 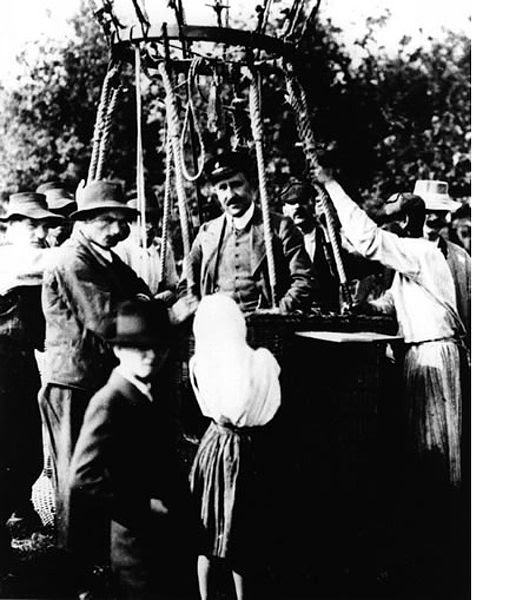