Light As Bright As A Million Suns Illuminates Fossilized Plant

Scientists have used one of the brightest lights in the Universe to expose the biochemical structure of a 50 million-year-old fossil plant to stunning visual effect.

The team of palaeontologists, geochemists and physicists investigated the chemistry of exceptionally preserved fossil leaves from the Eocene-aged ‘Green River Formation’ of the western United States by bombarding the fossils with X-rays brighter than a million suns produced by synchrotron particle accelerators. 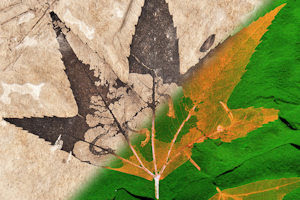 Researchers from Britain’s  and Diamond Light Source and the Stanford Synchrotron Radiation Lightsource in the US have published their findings, along with amazing images, in Metallomics; one of the images is featured on the cover of the latest edition of the Royal Society of Chemistry journal.

Lead author Dr Nicholas Edwards, a postdoctoral researcher at The University of Manchester, said: “The synchrotron has already shown its potential in teasing new information from fossils, in particular our group’s previous work on pigmentation in fossil animals. With this study, we wanted to use the same techniques to see whether we could extract a similar level of biochemical information from a completely different part of the tree of life.

“To do this we needed to test the chemistry of the fossil plants to see if the fossil material was derived directly from the living organisms or degraded and replaced by the fossilisation process.

“We know that plant chemistry can be preserved over hundreds of millions of years – this preserved chemistry powers our society today in the form of fossil fuels. However, this is just the ‘combustible’ part; until now no one has completed this type of study of the other biochemical components of fossil plants, such as metals.”

By combining the unique capabilities of two synchrotron facilities, the team were able to produce detailed images of where the various elements of the periodic table were located within both living and fossil leaves, as well as being able to show how these elements were combined with other elements.

The work shows that the distribution of copper, zinc and nickel in the fossil leaves was almost identical to that in modern leaves. Each element was concentrated in distinct biological structures, such as the veins and the edges of the leaves, and the way these trace elements and sulphur were attached to other elements was very similar to that seen in modern leaves and plant matter in soils.

Co-author Professor Roy Wogelius, from Manchester’s School of Earth, Atmospheric and Environmental Sciences, said: “This type of chemical mapping and the ability to determine the atomic arrangement of biologically important elements, such as copper and sulfur, can only be accomplished by using a synchrotron particle accelerator.

“In one beautiful specimen, the leaf has been partially eaten by prehistoric caterpillars – just as modern caterpillars feed – and their feeding tubes are preserved on the leaf. The chemistry of these fossil tubes remarkably still matches that of the leaf on which the caterpillars fed.”

The data from a suite of other techniques has led the team to conclude that the chemistry of the fossil leaves is not wholly sourced from the surrounding environment, as has previously been suggested, but represents that of the living leaves. Another modern-day connection suggests a way in which these specimens are so beautifully preserved over millions of years.

Manchester palaeontologist and co-author Dr Phil Manning said: “We think that copper may have aided preservation by acting as a ‘natural’ biocide, slowing down the usual microbial breakdown that would destroy delicate leaf tissues. This property of copper is used today in the same wood preservatives that you paint on your garden fence before winter approaches.”

Contacts and sources:
Aeron Haworth
University of Manchester
on March 26, 2014