A perfect storm of events created a massive magnetic cloud that could have caused fireworks on Earth. Earth dodged a huge magnetic bullet from the sun on July 23, 2012.

According to University of California, Berkeley, and Chinese researchers, a rapid succession of coronal mass ejections – the most intense eruptions on the sun – sent a pulse of magnetized plasma barreling into space and through Earth's orbit. Had the eruption come nine days earlier, it would have hit Earth, potentially wreaking havoc with the electrical grid, disabling satellites and GPS, and disrupting our increasingly electronic lives. 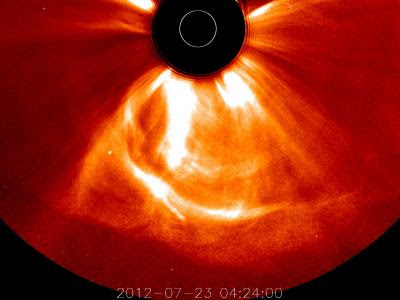 The solar bursts would have enveloped Earth in magnetic fireworks matching the largest magnetic storm ever reported on Earth, the so-called Carrington event of 1859. The dominant mode of communication at that time, the telegraph system, was knocked out across the United States, literally shocking telegraph operators. Meanwhile, the Northern Lights lit up the night sky as far south as Hawaii.

"Had it hit Earth, it probably would have been like the big one in 1859, but the effect today, with our modern technologies, would have been tremendous," said Luhmann, who is part of the STEREO (Solar Terrestrial Observatory) team and based at UC Berkeley's Space Sciences Laboratory.

A study last year estimated that the cost of a solar storm like the Carrington Event could reach $2.6 trillion worldwide. A considerably smaller event on March 13, 1989, led to the collapse of Canada's Hydro-Quebec power grid and a resulting loss of electricity to six million people for up to nine hours.

"An extreme space weather storm – a solar superstorm – is a low-probability, high-consequence event that poses severe threats to critical infrastructures of the modern society," warned Liu, who is with the National Space Science Center of the Chinese Academy of Sciences in Beijing. "The cost of an extreme space weather event, if it hits Earth, could reach trillions of dollars with a potential recovery time of 4-10 years. Therefore, it is paramount to the security and economic interest of the modern society to understand solar superstorms."

Based on their analysis of the 2012 event, Liu, Luhmann and their STEREO colleagues concluded that a huge outburst on the sun on July 22 propelled a magnetic cloud through the solar wind at a peak speed of more than 2,000 kilometers per second – four times the typical speed of a magnetic storm. It tore through Earth's orbit but, luckily, Earth and the other planets were on the other side of the sun at the time. Any planets in the line of sight would have suffered severe magnetic storms as the magnetic field of the outburst tangled with the planets' own magnetic fields.

The researchers determined that the huge outburst resulted from at least two nearly simultaneous coronal mass ejections (CMEs), which typically release energies equivalent to that of about a billion hydrogen bombs. The speed with which the magnetic cloud plowed through the solar wind was so high, they concluded, because another mass ejection four days earlier had cleared the path of material that would have slowed it down.

"The authors believe this extreme event was due to the interaction of two CMEs separated by only 10 to 15 minutes," said Joe Gurman, the project scientist for STEREO at NASA's Goddard Space Flight Center in Greenbelt, Md.

One reason the event was potentially so dangerous, aside from its high speed, is that it produced a very long-duration, southward-oriented magnetic field, Luhmann said. This orientation drives the largest magnetic storms when they hit Earth because the southward field merges violently with Earth's northward field in a process called reconnection. Storms that normally might dump their energy only at the poles instead dump it into the radiation belts, ionosphere and upper atmosphere and create auroras down to the tropics.

"These gnarly, twisty ropes of magnetic field from coronal mass ejections come blasting from the sun through the ambient solar system, piling up material in front of them, and when this double whammy hits Earth, it skews the Earth's magnetic field to odd directions, dumping energy all around the planet," she said. "Some of us wish Earth had been in the way; what an experiment that would have been."

"People keep saying that these are rare natural hazards, but they are happening in the solar system even though we don't always see them," she added. "It's like with earthquakes – it is hard to impress upon people the importance of preparing unless you suffer a magnitude 9 earthquake."

All this activity would have been missed if STEREO A – the STEREO spacecraft ahead of us in Earth's orbit and the twin to STEREO B, which trails in our orbit – had not been there to record the blast.

The goal of STEREO and other satellites probing the magnetic fields of the sun and Earth is to understand how and why the sun sends out these large solar storms and to be able to predict them during the sun's 11-year solar cycle. This event was particularly unusual because it happened during a very calm solar period.

"Observations of solar superstorms have been extremely lacking and limited, and our current understanding of solar superstorms is very poor," Liu said. "Questions fundamental to solar physics and space weather, such as how extreme events form and evolve and how severe it can be at the Earth, are not addressed because of the extreme lack of observations."

The work was supported by NASA.