ISS To Beam Video Via Laser Back To Earth

What's more interesting than videos of cats chasing laser beams over the kitchen floor? How about videos sent OVER laser beams from NASA's International Space Station back to Earth?

A team of about 20 working at NASA's Jet Propulsion Lab in Pasadena, Calif., through the lab's Phaeton early-career-hire program, led the development of the Optical Payload for Lasercomm Science (OPALS) investigation, which is preparing for a March 16 launch to the International Space Station aboard the SpaceX-3 mission. The goal? NASA's first optical communication experiment on the orbital laboratory. 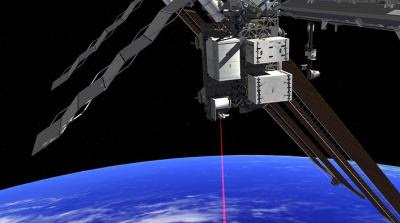 Scientific instruments used in space missions increasingly require higher communication rates to transmit gathered data back to Earth or to support high-data-rate applications, like high-definition video streams. Optical communications--also referred to as "lasercom"--is an emerging technology where data is sent via laser beams. This offers the promise of much higher data rates than what is achievable with current radio frequency (RF) transmissions and has the advantage that it operates in a frequency band that is currently unregulated by the Federal Communications Commission.

"It's like upgrading from dial-up to DSL," added project systems engineer Bogdan Oaida. "Our ability to generate data has greatly outpaced our ability to downlink it. Imagine trying to download a movie at home over dial-up. It's essentially the same problem in space, whether we're talking about low-Earth orbit or deep space."

The Optical Payload for Lasercomm Science (OPALS) instrument is hoisted onto a shipping pallet for transfer to Kennedy Space Center in Florida. From there it will launch to the International Space Station. 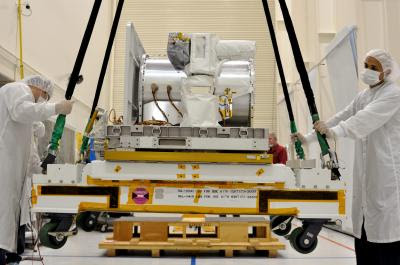 OPALS is scheduled to launch aboard a SpaceX Falcon 9 rocket, part of a cargo resupply mission to the space station. The payload will be inside the Dragon cargo spacecraft. Once deployed, OPALS will be conducting transmission tests for a period of nearly three months, with the possibility of a longer mission. After the Dragon capsule docks with the station, OPALS will be robotically extracted from the trunk of the Dragon, and then manipulated by a robotic arm for positioning on the station's exterior. It is the first investigation developed at JPL to launch on SpaceX's Falcon rocket.

The technology demo was conceived, developed, built and tested at JPL by engineers in the early stage of their careers in order to gain experience building space hardware and developing an end-to-end communication system. The system uses primarily commercial off-the-shelf hardware and encloses electronics in a pressurized container. "We were not as constrained by mass, volume or power on this mission as we were by cost," said Abrahamson, and this approach allowed a lower cost development on an efficient schedule.

As the space station orbits Earth, a ground telescope tracks it and transmits a laser beacon to the OPALS. While maintaining lock on the uplink beacon, the orbiting instrument's flight system will downlink a modulated laser beam with a formatted video. Each demonstration, or test, will last approximately 100 seconds as the station instrument and ground telescope maintain line of sight. It will be used to study pointing, acquisition and tracking of the very tightly focused laser beams, taking into account the movement of the space station, and to study the characteristics of optical links through Earth's atmosphere. NASA will also use OPALS to educate and train personnel in the operation of optical communication systems.

The success of OPALS will provide increased impetus for operational optical communications in NASA missions. The space station is a prime target for multi-gigabit per second optical links. Fast laser communications between Earth and spacecraft like the station or the Mars Curiosity rover would enhance their connection to engineers and scientists on the ground as well as to the public.