These objects too can be described as “hairless”

For astrophysicists neutron stars are extremely complex astronomical objects. Research conducted with the collaboration of SISSA and published in the journal Physical Review Letters demonstrates that in certain respects these stars can instead be described very simply and that they show similarities with black holes.

Illustration of the structure of a neutron star 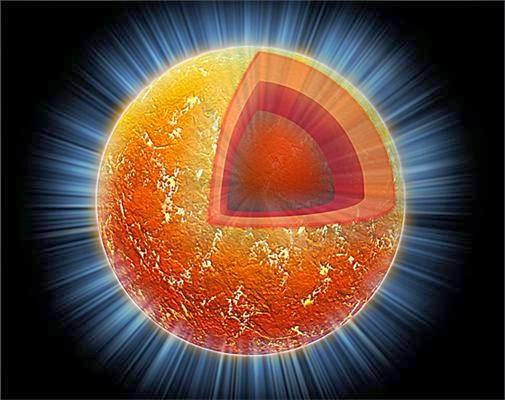 In how many ways can one describe an object? Take an apple: by just looking at it we can easily estimate its weight, shape and colour but we are unable to describe it at any other level, for example, to evaluate the chemical composition of its flesh. Something similar also applies to astronomical objects: until today one of the challenges facing scientists was to describe neutron stars at the nuclear physics level.

The matter these stars are made up of is in fact extremely complex, and several complicated equations of state have been proposed. However, to date there is no agreement as to which is the correct (or the best) one. A theoretical study conducted by SISSA (the International School for Advanced Studies of Trieste), in collaboration with Athens University, has demonstrated that neutron stars can also be described in relatively simple terms, by observing the structure of the space-time surrounding them.

“Neutron stars are complex objects owing to the matter that composes them. We can picture them as enormous atomic nuclei with a radius of about ten kilometres”, explains Georgios Pappas, first author of the study carried out at SISSA. “A neutron star is what remains of the collapse of a massive star: the matter inside it is extremely dense and mostly consisting of neutrons”.

“The nuclear physics required to understand the nature of the matter contained in these astronomical objects generally makes their description very complicated and difficult to formulate,” continues Pappas. “What we have demonstrated, by using numerical methods, is that there are properties that can provide a description of some aspects of neutron stars and the surrounding space-time in a simple manner, similar to the description used for black holes”.

Black holes are truly unique objects: they have lost all matter and are only made up of space and time. Just like neutron stars they are the result of the collapse of a bigger star (in this case much bigger than the stars giving rise to neutron stars) and in the implosion all the matter has been swept away. “They are considered to be the most perfect objects in the Universe and the expression ‘hairless’ that was coined by John Archibald Wheeler to indicate their simplicity has become famous. According to our calculations even neutron stars can be depicted in a very similar manner”.

Scientists use “multipole moments” as parameters to describe objects. The moments required to describe a black hole are two, mass and angular momentum (the speed at which it rotates around its axis). For neutron stars three moments are needed: mass, angular momentum and quadrupole moment, that is, a coefficient that describes the deformation of the object produced by its rotation.

In practice, we can have a description of a neutron star that is independent of the matter that forms it. “This has major implications”, concludes Pappas. “In fact, by using the data collected with astrophysical observations – for example, the radiation emitted by a neutron star, or information about objects gravitating around the star or other information – we can reconstruct the features of a neutron star”.

The paper has just been published in the journal Physical Review Letters, where it also featured as an Editors’ Suggestion, among the most interesting papers of the latest issue.
http://www.sissa.it/index.php/about/news/general/2905
on March 25, 2014