The Earth's mantle is a solid layer that undergoes slow, continuous convective motion. But how do these rocks deform, thus making such motion possible, given that minerals such as olivine (the main constituent of the upper mantle) do not exhibit enough defects in their crystal lattice to explain the deformations observed in nature? 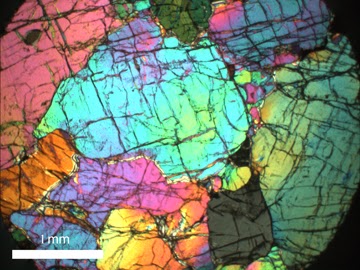 A team led by the Unité Matériaux et Transformations (CNRS/Université Lille 1/Ecole Nationale Supérieure de Chimie de Lille) has provided an unexpected answer to this question. It involves little known and hitherto neglected crystal defects, known as 'disclinations', which are located at the boundaries between the mineral grains that make up rocks.

Focusing on olivine, the researchers have for the first time managed to observe such defects and model the behavior of grain boundaries when subjected to a mechanical stress. The findings, which have just been published in Nature, go well beyond the scope of the geosciences: they provide a new, extremely powerful tool for the study of the dynamics of solids and for the materials sciences in general.

The Earth continuously releases its heat via convective motion in the Earth's mantle, which underlies the crust. Understanding this convection is therefore fundamental to the study of plate tectonics. The mantle is made up of solid rocks. In order for convective motion to occur, it must be possible for the crystal lattice of these rocks to deform. Until now, this was a paradox that science was unable to fully resolve. While defects in the crystal lattice, called dislocations, provide a very good explanation of the plasticity of metals, they are insufficient to explain the deformations undergone by certain mantle rocks.

The researchers suspected that the solution was to be found at the boundaries between the mineral grains that make up rocks. However, they lacked the conceptual tools needed to describe and model the role played by these boundaries in the plasticity of rocks. Researchers at the Unité Matériaux et Transformations (CNRS/Université Lille 1/Ecole Nationale Supérieure de Chimie de Lille) in collaboration with researchers at the Laboratoire Géosciences Montpellier (CNRS/Université Montpellier 2) and the Laboratoire d'Etude des Microstructures et de Mécanique des Matériaux (CNRS/Université de Lorraine/Arts et Métiers ParisTech/Ecole Nationale d'Ingénieurs de Metz) have now explained this role.

They have shown that the crystal lattice of the grain boundaries exhibits highly specific defects known as 'disclinations', which had hitherto been neglected. The researchers succeeded in observing them for the first time in samples of olivine (which makes up as much as 60% of the upper mantle) by using an electron microscope and specific image processing.

They even went further: based on a mathematical model, they showed that these disclinations provided an explanation for the plasticity of olivine. When mechanical stress is applied, the disclinations enable the grain boundaries to move, thus allowing olivine to deform in any direction. Flow in the mantle is thus no longer incompatible with its rigidity.

This research goes beyond explaining the plasticity of rocks in the Earth's mantle: it is a major step forward in materials science. Consideration of disclinations should provide scientists with a new tool to explain many phenomena related to the mechanics of solids. The scientists intend to continue their research into the structure of grain boundaries, not only in other minerals but also in other solids such as metals.