Chicken From Hell: 11 Feet Long, 500 Pounds, Found In The Dakotas

Scientists from Carnegie and Smithsonian museums and the University of Utah today unveiled the discovery, naming and description of a sharp-clawed, 500-pound, bird-like dinosaur that roamed the Dakotas with T. rex 66 million years ago and looked like an 11 ½-foot-long "chicken from hell." 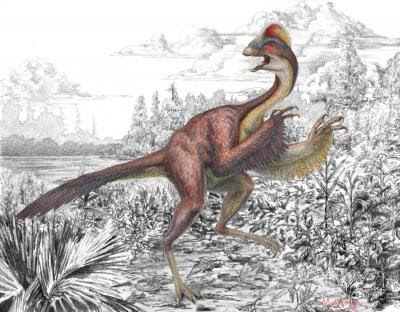 "It was a giant raptor, but with a chicken-like head and presumably feathers. The animal stood about 10 feet tall, so it would be scary as well as absurd to encounter," says University of Utah biology postdoctoral fellow Emma Schachner, a co-author of a new study of the dinosaur. It was published online today in PLOS ONE, a journal of the Public Library of Science.

The study's lead author, Matt Lamanna of the Carnegie Museum of Natural History in Pittsburgh, says: "We jokingly call this thing the 'chicken from hell,' and I think that's pretty appropriate."

The beaked dinosaur's formal name is Anzu wyliei – Anzu after a bird-like demon in Mesopotamian mythology, and wyliei after a boy named Wylie, the dinosaur-loving grandson of a Carnegie Museums of Pittsburgh trustee.

Three partial skeletons of the dinosaur – almost making up a full skeleton – were excavated from the uppermost level of the Hell Creek rock formation in North and South Dakota – a formation known for abundant fossils of Tyrannosaurus rex and Triceratops. The new dinosaur was 11 ½ feet long, almost 5 feet tall at the hip and weighed an estimated 440 to 660 pounds. Its full cast is on display at the Carnegie Museum.

Schachner and Lamanna were joined in the new study and description of three specimens by Hans-Dieter Sues and Tyler Lyson of the Smithsonian Institution's National Museum of Natural History in Washington. 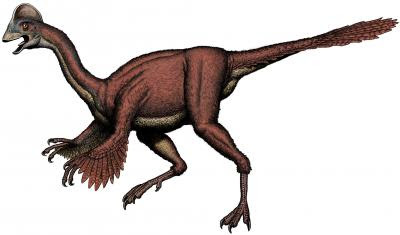 "I am really excited about this discovery because Anzu is the largest oviraptorosaur found in North America," she says. "Oviraptorosaurs are a group of dinosaurs that are closely related to birds and often have strange, cassowary-like crests on their heads." (The cassowary is a flightless bird in New Guinea and Australia related to emus and ostriches.)

Anzu is also "one of the youngest oviraptorosaurs known, meaning it lived very close to the dinosaur extinction event" blamed on an asteroid striking Earth 65 million years ago, Schachner says.

The researchers believe Anzu, with large sharp claws, was an omnivore, eating vegetation, small animals and perhaps eggs while living on a wet floodplain. The dinosaur apparently got into some scrapes.

"Two of the specimens display evidence of pathology," Schachner says. "One appears to have a broken and healed rib, and the other has evidence of some sort of trauma to a toe."

Having a nearly complete skeleton of Anzu wyliei sheds light on a category of oviraptorosaur theropod dinosaurs named caenagnathids, which have been known for a century, but only from limited fossil evidence.

Like many "new" dinosaurs, Anzu wyliei fossils were discovered some years ago, and it took more time for researchers to study the fossils and write and publish a formal scientific description. As a graduate student at the University of Pennsylvania, Schachner helped Lyson excavate the least complete specimen – six bones from the neck, forelimbs and shoulder – in North Dakota. The Carnegie Museum obtained the other specimens.

Emma Schachner, a postdoctoral fellow in biology at the University of Utah, worked with researchers from the Carnegie Museum of Natural History and the Smithsonian's National Museum of Natural History to publish a study unveiling the discovery, name and description of a 66-million-year-old bird-like, beaked, head-crested 500-pound dinosaur species, Anzu wyliei, which the researchers nicknamed the "chicken from hell." Schachner recently has studied the respiratory systems of lizards and alligators, like the one she is holding here. 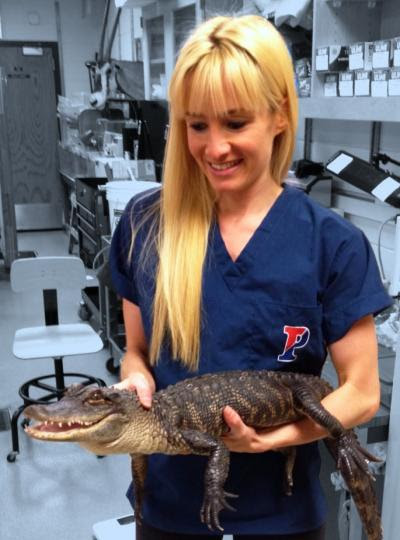 At a scientific meeting in 2005 Lamanna, Lyson and Schachner realized they had fossils of the same new species of dinosaur. They soon began collaborating on the new study and asked Sues to join them because he was an expert on this type of dinosaur, Schachner says.

"It took years since all of us had busy schedules, and I moved to Utah in 2010 to work on reptile respiratory evolution," she says.

The study's four authors finally met for a week at the Carnegie Museum to work on the dinosaur together. Among other tasks, Schachner illustrated and photographed some of the bones.

She says the process was "really exciting. Naming a dinosaur is one of those things I've wanted to be involved in since I was a kid."