Did the Polynesians beat Columbus to South America? Not according to the tale of migration uncovered by analysis of ancient DNA from chicken bones recovered in archaeological digs across the Pacific.

The ancient DNA has been used to study the origins and dispersal of ancestral Polynesian chickens, reconstructing the early migrations of people and the animals they carried with them.

The study, led by the University of Adelaide's Australian Centre for Ancient DNA (ACAD) and published today in Proceedings of the National Academy of Sciences USA, reveals that previous claims of contact between early Polynesians and South America were probably based on contaminated results. Instead, the new study has identified and traced a unique genetic marker of the original Polynesian chickens that is only present in the Pacific and Island Southeast Asia. 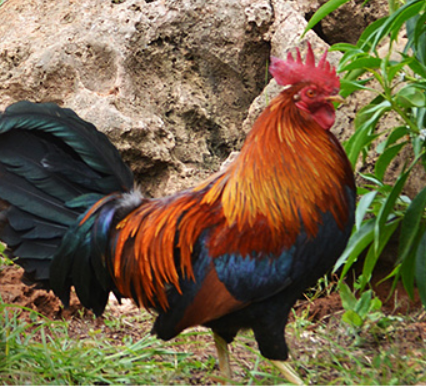 The research team of national and international collaborators, including Australian National University, University of Sydney, and Durham and Aberdeen Universities in the UK, used female-inherited mitochondrial DNA extracted from chicken bones excavated in archaeological digs from islands including Hawaii, Rapa Nui (Easter Island) and Niue.

Associate Professor Jeremy Austin, ACAD Deputy Director, says: "There are still many theories about where the early human colonists of the remote Pacific came from, which routes they followed and whether they made contact with the South American mainland. Domestic animals, such as chickens, carried on these early voyages have left behind a genetic record that can solve some of these long standing mysteries."

Project leader Professor Alan Cooper, Director of ACAD says: "We were able to re-examine bones used in previous studies that had linked ancient Pacific and South American chickens, suggesting early human contact, and found that some of the results were contaminated with modern chicken DNA, which occurs at trace levels in many laboratory components," says ACAD Director Professor Alan Cooper. "We were able to show that the ancient chicken DNA provided no evidence of any pre-Columbian contact between these areas."

"Remarkably, our study also shows that the original Polynesian lineages appear to have survived on some isolated Pacific islands, despite the introduction of European domestic animals across the Pacific in the last couple of hundred years," Professor Cooper says. "These original lineages could be of considerable importance to the poultry industry which is concerned about the lack of genetic diversity in commercial stocks."