In a paper published today in Nature Communications, an international team of scientists, including three from the University of New Hampshire's Space Science Center, uncovers the origin and cause of an extreme space weather event that occurred on July 22, 2012 at the sun and generated the fastest solar wind speed ever recorded directly by a solar wind instrument.

The formation of the rare, powerful storm showed striking, novel features that were detected by a UNH-built instrument on board NASA's twin-satellite Solar TErrestrial RElations Observatory (STEREO) mission. An instrument led by the University of California, Berkeley also made key measurements.

This image combines data from two coronagraphs and an extreme ultra-violet imager (green) on STEREO A. The CME is the bright streaks emanating from the sun. A coronagraph is a telescope that uses a disk to block the sun's bright surface revealing the solar corona. 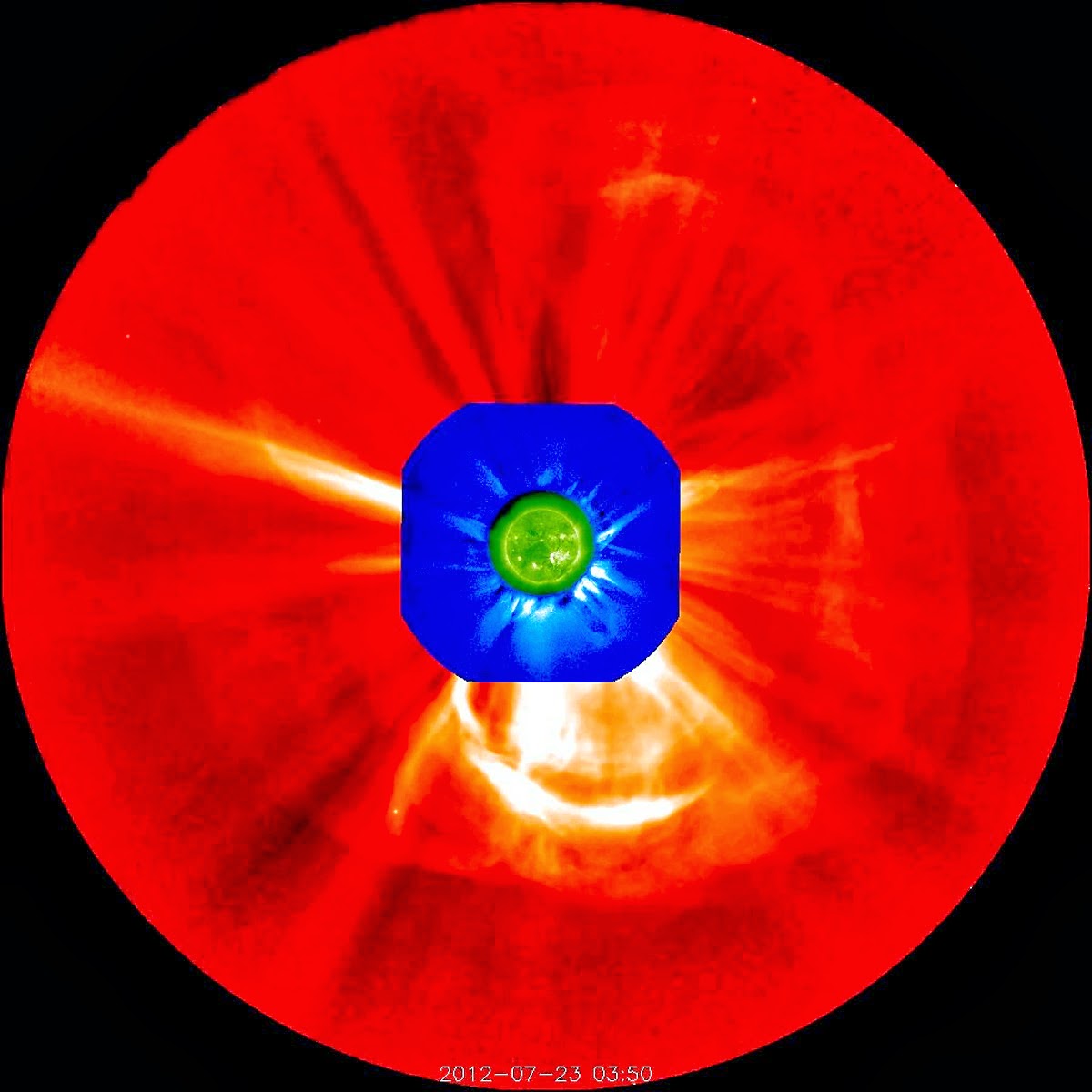 The 2012 storm was so powerful that had it been aimed at Earth instead of at the STEREO A spacecraft, which was located 120 degrees off to the side of Earth, the consequences would have been dramatic: widespread aurora, satellite malfunctions, and potential for failures with ground-based electricity grids.

To date, it has been unclear how extreme space weather storms form and evolve. Developing a better understanding of their causes is vital to protect modern society and its technological infrastructures, and is one of the goals of the STEREO mission.

NASA movie of the July 22, 2012 coronal mass ejection. The heavy sprinkling of white streaks after the CME are very energetic protons striking the spacecraft's imagers.

"These results provide a new view crucial to solar physics and space weather as to how an extreme space weather event can arise from a combination of multiple solar eruptions," says research assistant professor Noé Lugaz of the UNH Institute for the Study of Earth, Oceans, and Space (EOS) and a coauthor on the Nature Communications paper.

The authors suggest it was the successive, one-two punch of solar eruptions known as coronal mass ejections (CMEs) that was the key to the event, which blasted away from the sun at 3,000 kilometers per second—a speed that would circle the Earth five times in one minute. Detecting the successive eruptions would not have been possible prior to STEREO.

"In a sense, this was the 'perfect storm'," Lugaz says. "The first, fast eruption greased the skids for the quick propagation of the subsequent, extremely fast eruptions through interplanetary space."

CMEs are clouds of magnetic fields and plasma—a hot gas composed of charged particles—and, in the July 2012 event, the in-transit interaction between two closely launched CMEs resulted in the unusually powerful and fast-moving space weather event.

Says EOS research professor Charles Farrugia, coauthor on the paper, "Remarkably, this is reminiscent of the great solar flare in 1859, the Carrington Event, and the geomagnetic storm of unheard of intensity in Earth's magnetosphere, or magnetic field, that occurred less than one day later."

PLASTIC, together with the University of California, Berkeley-led In-situ Measurements of Particles and CME Transients (IMPACT) instrument, made the critical measurements of the July 2012 solar storm.

The STEREO mission, launched in October 2006, is comprised of two nearly identical spacecraft the size of golf carts. Their observations enable scientists to construct the first-ever three-dimensional views of the sun. PLASTIC provides plasma characteristics of protons, alpha particles and heavy ions. Solar wind protons and alpha particles constitute most of the mass in the solar wind and are therefore the primary components exerting kinetic pressure on the Earth's magnetosphere—one of the drivers for space weather.