Technology now allows us to read facial expressions and identify which of the seven universal emotions a person is feeling: fear, anger, joy, sadness, disgust, surprise, or suspicion. This is very useful in video game development, medicine, marketing, and, perhaps less obviously, in driver safety.

We know that in addition to fatigue, the emotional state of the driver is a risk factor.

As the conductor drives, the device captures one the seven universal emotions: fear, anger, joy, sadness, disgust, surprise, or suspicion.

Irritation, in particular, can make drivers more aggressive and less attentive. EPFL researchers, in collaboration with PSA Peugeot Citroën, have developed an on-board emotion detector based on the analysis of facial expressions. Tests carried out using a prototype indicate that the idea could have promising applications.

It's not easy to measure emotions within the confines of a car, especially non-invasively. The solution explored by scientists in EPFL's Signal Processing 5 Laboratory (LTS5), who specialize in facial detection, monitoring and analysis, is to get drivers' faces to do the job. In collaboration with PSA Peugeot Citroën, LTS5 adapted a facial detection device for use in a car, using an infrared camera placed behind the steering wheel.

The problem was to get the device to recognize irritation on the face of a driver. Everyone expresses this state somewhat differently – a kick, an epithet, a nervous tic or an impassive face. To simplify the task at this stage of the project, Hua Gao and Anil Yüce, who spearheaded the research, chose to track only two expressions: anger and disgust, whose manifestations are similar to those of anger.


The device detects anger on the driver's face. 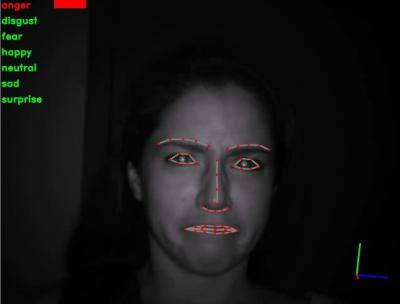 Two phases of tests were carried out. First, the system "learned" to identify the two emotions using a series of photos of subjects expressing them. Then the same exercise was carried out using videos. The images were taken both in an office setting as well as in real life situations, in a car that was made available for the project.

The rapidity with which the comparison between filmed images and thus detection could be carried out depended on the analysis methods used. But overall, the system worked well and irritation could be accurately detected in the majority of cases. When the test failed, it was usually because this state is very variable from individual to individual. This is where the difficulty will always lie, given the diversity of how we express anger. Additional research aims to explore updating the system in real-time – to complement the static database – a self-taught human-machine interface, or a more advanced facial monitoring algorithm, says Hua Gao. 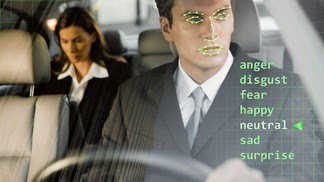 Detecting emotions is only one indicator for improving driver safety and comfort. In this project, it was coupled with a fatigue detector that measures the percentage of eyelid closure. The LTS5 is also working on detecting other states on drivers' faces such as distraction, and on lip reading for use in vocal recognition. These projects are coordinated by EPFL's Transportation Center and carried out in collaboration with PSA Peugeot Citroën.