NASA's Hubble Space Telescope has recorded the never-before-seen break-up of an asteroid into as many as 10 smaller pieces.

Fragile comets, comprised of ice and dust, have been seen falling apart as they near the sun, but nothing like this has ever before been observed in the asteroid belt.

This series of Hubble Space Telescope images reveals the breakup of an asteroid over a period of several months starting in late 2013. The largest fragments are up to 180 meters (200 yards) in radius. 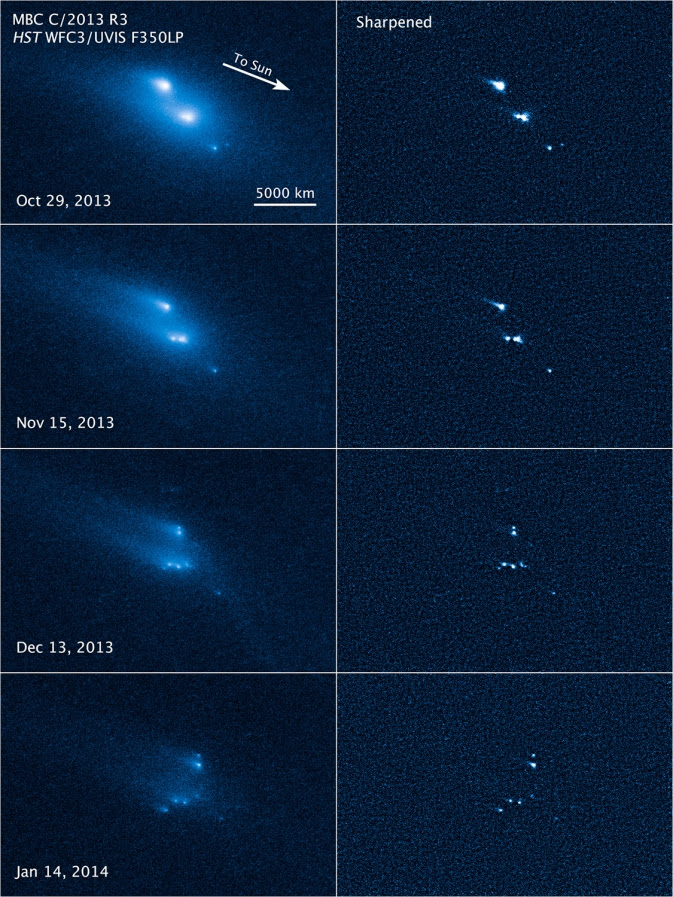 "This is a rock, and seeing it fall apart before our eyes is pretty amazing," said David Jewitt of the University of California at Los Angeles, who led the astronomical forensics investigation.

The crumbling asteroid, designated P/2013 R3, was first noticed as an unusual, fuzzy-looking object by the Catalina and Pan STARRS sky surveys on Sept. 15, 2013. A follow-up observation on October 1 with the W. M. Keck Observatory on the summit of Mauna Kea, a dormant volcano on the island of Hawaii, revealed three bodies moving together in an envelope of dust nearly the diameter of Earth.

"The Keck Observatory showed us this thing was worth looking at with Hubble," Jewitt said. "With its superior resolution, space telescope observations soon showed there were really 10 embedded objects, each with comet-like dust tails. The four largest rocky fragments are up to 400 yards in diameter, about four times the length of a football field."

Hubble data showed the fragments drifting away from each other at a leisurely one mph. The asteroid began coming apart early last year, but new pieces continue to reveal themselves, as proved in the most recent images.

It is unlikely the asteroid is disintegrating because of a collision with another asteroid, which would have been instantaneous and violent by comparison to what has been observed. Debris from such a high-velocity smashup would also be expected to travel much faster than observed. Nor is the asteroid coming unglued due to the pressure of interior ices warming and vaporizing.

This leaves a scenario in which the asteroid is disintegrating due to a subtle effect of sunlight, which causes the rotation rate of the asteroid to gradually increase. Eventually, its component pieces -- like grapes on a stem -- succumb to centrifugal force and gently pull apart. The possibility of disruption in this manner has been discussed by scientists for several years, but never reliably observed.

For this scenario to occur, P/2013 R3 must have a weak, fractured interior -- probably as the result of numerous non-destructive collisions with other asteroids. Most small asteroids are thought to have been severely damaged in this way. P/2013 R3 is likely the byproduct of just such a collision sometime in the last billion years.

With the previous discovery of an active asteroid spouting six tails, named P/2013 P5, astronomers are finding more evidence the pressure of sunlight may be the primary force causing the disintegration of small asteroids -- less than a mile across-- in our solar system.

The asteroid's remnant debris, weighing about 200,000 tons, will in the future provide a rich source of meteoroids. Most will eventually plunge into the sun, but a small fraction of the debris may one day blaze across our skies as meteors.

The Hubble Space Telescope is a project of international cooperation between NASA and the European Space Agency. NASA's Goddard Space Flight Center in Greenbelt, Md., manages the telescope. The Space Telescope Science Institute (STScI) in Baltimore conducts Hubble science operations. STScI is operated for NASA by the Association of Universities for Research in Astronomy, Inc., in Washington.