Researchers from the Santa Fe Institute and the Smithsonian Institution have pieced together a highly detailed picture of feeding relationships among 700 mammal, bird, reptile, fish, insect, and plant species from a 48 million year old lake and forest ecosystem. 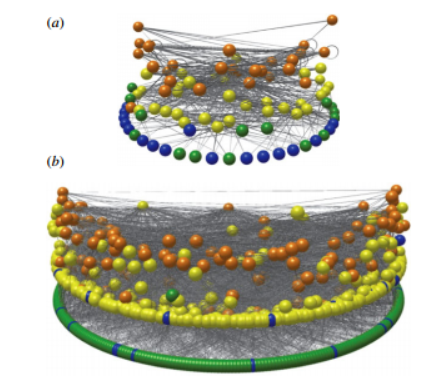 Their analysis of fossilized remains from the Messel deposit near Frankfurt, Germany, provides the most compelling evidence to date that ancient food webs were organized much like modern food webs. Their paper describing the research appears online and open access today in Proceedings of the Royal Society B: Biological Sciences.

The researchers first compiled data about the more than 6,500 feeding relationships among 700 species found in the deposit, which dates to the Eocene epoch. Then they constructed two networks of feeding interactions – one for the lake and one for the surrounding forest.

Next, they mathematically compared each food web’s structural features with those of modern-day food web datasets – matching up such indicators as fractions of cannibals, herbivores, and omnivores; the distributions of generalist and specialist feeders; the mean lengths of feeding chains connecting pairs of taxa; and so on.

“What we found is that the Messel lake food web, with 94 taxa and 517 links, looks very much like a modern food web,” says SFI Professor Jennifer Dunne. “This is despite the fact that 48 million years of species turnover and evolution separate the Messel lake ecosystem from modern ecosystems.”

Analysis of the Messel forest food web’s structure was more challenging due to the high degree of species diversity represented in the Messel dataset – 630 taxa and 5,534 feeding links – far more than what datasets for modern webs include.

“Basically, we don’t yet have examples of comprehensive modern terrestrial food web datasets that have the high resolution of plants, insects, and their interactions that we included in the Messel forest dataset,” says Dunne.

Nevertheless, the researchers were able to show that the Messel forest web is likely comparable in structure to modern webs, by using models to account for the expected differences in structure that would result from the many more taxa and interactions in the Messel data.

The results are significant because they show that the Messel ecosystem developed a modern ecological structure, along with a modern biota, in a relatively brief 18 million year period following Earth’s most recent die-off, the end-Cretaceous mass extinction, which disrupted ecosystem dynamics on a massive scale and served as a species diversity bottleneck.

Dunne says that beyond the ecological and evolutionary significance of the study, the work resulted in the most highly resolved, detailed, and comprehensive terrestrial food web ever compiled.

“We want our data to serve as a challenge to ecologists to compile more highly and evenly resolved food web data for extant systems,” she says.

Ancient food webs are particularly difficult to reconstruct because data about them is usually limited and of low quality. But the Messel shale deposit is unique. Scientists hypothesize that releases of toxic volcanic gases rendered the area’s air and water lethal to most life in a short time. Animals in and near the lake were overwhelmed, and, along with plants, sunk to the low-oxygen depths of the lake where they were smothered in mud and fossilized, soft tissue and all. The Messel includes outstanding evidence of feeding interactions, including stomach contents and bite marks in soft tissues that can be traced back to particular species’ mouth parts.

“Compiling such a highly resolved food web was possible for the Messel because of the exquisite preservation of soft body parts and ecological traces in the deposit,” says Dunne, “and because my co-author, Conrad Labandeira, is one of the world’s foremost experts on fossil plant-insect interactions.”