For the first time, UA astronomers have used the same imaging technology found in a digital camera to take a picture of a planet far from our solar system with an Earth-based telescope.

University of Arizona researchers snapped images of a planet outside our solar system with an Earth-based telescope using essentially the same type of imaging sensor found in digital cameras instead of an infrared detector. Although the technology still has a very long way to go, the accomplishment takes astronomers a small step closer to what will be needed to image earth-like planets around other stars

This is an artist's impression of a young, giant exoplanet orbiting its host star. 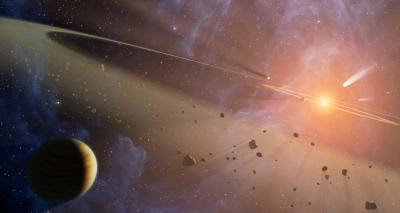 "This is an important next step in the search for exoplanets because imaging in visible light instead of infrared is what we likely have to do if we want to detect planets that might be suitable for harboring life," said Jared Males, a NASA Sagan Fellow in the UA's Department of Astronomy and Steward Observatory and lead author on a report to be published in The Astrophysical Journal.

Even though the image was taken at a wavelength that is just shy of being visible to the human eye, the use of a digital camera-type imaging sensor – called a charge-coupled device or CCD – opens up the possibility of imaging planets in visible light, which has not been possible previously with Earth-based telescopes.

"This is exciting to astronomers because it means we now are a small step closer to being able to image planets outside our solar system in visible light," said Laird Close, a professor in the Department of Astronomy, who co-authored the paper.

He explained that all the other Earth-based images taken of exoplanets close to their stars are infrared images, which detect the planets' heat. This limits the technology to Gas Giants – massive, hot planets young enough to still shed heat. In contrast, older, possibly habitable planets that have cooled since their formation don't show up in infrared images as readily, and to image them, astronomers will have to rely on cameras capable of detecting visible light.

This is an image of the exoplanet Beta Pictoris b taken with the Magellan Adaptive Optics VisAO camera. This image was made using a CCD camera, which is essentially the same technology as a digital camera. The planet is nearly 100,000 times fainter than its star and orbits its star at roughly the same distance as Saturn from our Sun. 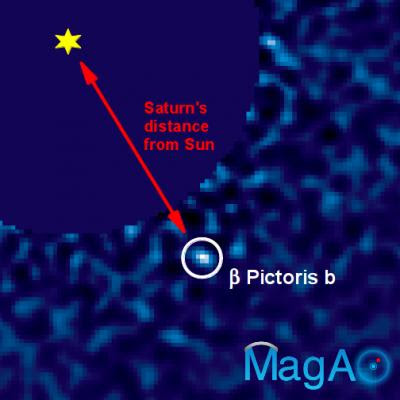 
"Our ultimate goal is to be able to image what we call pale blue dots," Close said. "After all, the Earth is blue. And that's where you want to look for other planets: in reflected blue light."

The photographed planet, called Beta Pictoris b, orbits its star at only nine times the Earth-Sun distance, making its orbit smaller than Saturn's. In the team's CCD images, Beta Pictoris b appears about 100,000 times fainter than its host star, making it the faintest object imaged so far at such high contrast and at such relative proximity to its star. The new images of this planet helped confirm that its atmosphere is at a temperature of roughly 2600 degrees Fahrenheit (1700 Kelvin). The team estimates that Beta Pictoris b weighs in at about 12 times the mass of Jupiter.

"Because the Beta Pictoris system is 63.4 light years from Earth, the scenario is equivalent to imaging a dime next right next to a lighthouse beam from more than four miles away," Males said. "Our image has the highest contrast ever achieved on an exoplanet that is so close to its star."

The contrast in brightness between the bright star and the faint planet is similar to the height of a 4-inch molehill next to Mount Everest, Close explained.

In addition to the host star's overwhelming brightness, the astronomers had to overcome the turbulence in Earth's atmosphere, which causes stars to twinkle and telescope images to blur. The success reported here is mostly due to an adaptive optics system developed by Close and his team that eliminates much of the atmosphere's effect. The Magellan Adaptive Optics technology is very good at removing this turbulence, or blurring, by means of a deformable mirror changing shape 1,000 times each second in real time.

Adaptive optics have been used for more than 20 years at observatories in Arizona, most recently at the Large Binocular Telescope, and the latest version has now been deployed in the high desert of Chile at the Magellan 6.5-meter telescope.

This image shows the Magellan Telescope with the MagAO's Adaptive Secondary Mirror mounted at the top looking down some 30 feet onto the 21-foot diameter primary mirror, which is encased inside the blue mirror cell. 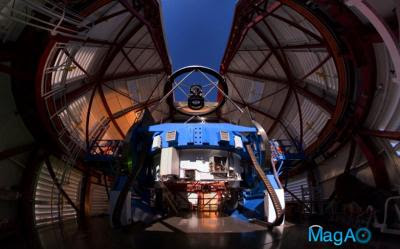 
The team also imaged the planet with both of MagAO's cameras, giving the scientists two completely independent simultaneous images of the same object in infrared as well as bluer light to compare and contrast.

"An important part of the signal processing is proving that the tiny dot of light is really the planet and not a speckle of noise," said Katie Morzinski, who is also a Sagan Fellow and member of the MagAO team. "I obtained the second image in the infrared spectrum – at which the hot planet shines brightly – to serve as an unequivocal control that we are indeed looking at the planet. Taking the two images simultaneously helps to prove the planet image on the CCD is real and not just noise."

Males added: "In our case, we were able to record the planet's own glow because it is still young and hot enough so that its signal stood out against the noise introduced by atmospheric blurring."

"But when you go yet another 100,000 times fainter to spot much cooler and truly earthlike planets," Males said, "we reach a situation in which the residual blurring from the atmosphere is too large and we may have to resort to a specialized space telescope instead."

Development of the MagAO system was made possible through the strong support of the National Science Foundation MRI, TSIP and ATI grant programs. The Magellan telescopes are operated by a partnership of the Carnegie institute, the University of Arizona, Harvard University, Massachusetts Institute of Technology and the University of Michigan. The work of NASA Sagan Fellows Jared Males and Katie Morzinski was performed in part under contract with the California Institute of Technology funded by NASA through the Sagan Fellowship Program executed by the NASA Exoplanet Science Institute.


Contacts and sources:
Daniel Stolte
University of Arizona
on March 05, 2014