Researchers from Lund University and the Swedish Museum of Natural History have made a unique discovery in a well-preserved fern that lived 180 million years ago. Both undestroyed cell nuclei and individual chromosomes have been found in the plant fossil, thanks to its sudden burial in a volcanic eruption.

This is a fern fossil. 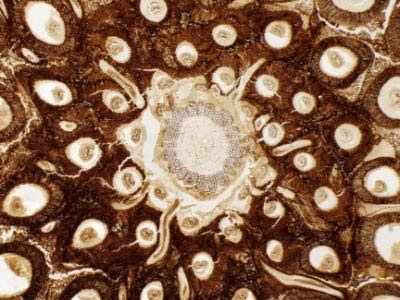 The well-preserved fossil of a fern from the southern Swedish county of Skåne is now attracting attention in the research community. The plant lived around 180 million years ago, during the Jurassic period, when Skåne was a tropical region where the fauna was dominated by dinosaurs, and volcanoes were a common feature of the landscape. The fossilised fern has been studied using different microscopic techniques, X-rays and geochemical analysis. The examinations reveal that the plant was preserved instantaneously, before it had started to decompose. It was buried abruptly under a volcanic lava flow.

"The preservation happened so quickly that some cells have even been preserved during different stages of cell division", said Vivi Vajda, Professor of Geology at Lund University.

Thanks to the circumstances of the fern's sudden death, the sensitive components of the cells have been preserved. The researchers have found cell nuclei, cell membranes and even individual chromosomes. Such structures are extremely rare finds in fossils, observed Vivi Vajda.

"This naturally leads us to think that there must be more to discover. It isn't hard to imagine what else could be encapsulated in the lava flows at Korsaröd in Skåne", said Vivi Vajda.

This is a collage fern.

Professor Vajda has carried out the study with two researchers from the Swedish Museum of Natural History, Benjamin Bomfleur and Stephen McLoughlin. The fern belonged to the family Osmundaceae, Royal Ferns. In modern times, royal ferns grow in the wild in Sweden and are also a common garden plant. Living representatives of this family are very similar in appearance to the Jurassic fossil, which suggests that only limited evolutionary change has taken place over the millennia. By comparing the size of the cell nuclei in the fossilised plant with its living relatives, the researchers have been able to show that the royal ferns have outstanding evolutionary stability.

"Royal Ferns look essentially the same now as they did during the Jurassic Period, and are therefore an excellent example of what we call a living fossil", said Vivi Vajda.

Professor Vajda has also dated the rocks surrounding the fossil by studying pollen and spores preserved in these rocks. Their analysis revealed that the lava flows are around 180 million years old, from the early Jurassic Period. These results have considerably refined previous radiometric dating conducted on nearby volcano cones. In addition, the research study shows that spores from royal ferns, as well as pollen from coniferous trees, including cypress and cycad, are found in large quantities in the volcanic rock. This is evidence of varied vegetation and a hot, humid climate at the time when the area was engulfed by a disastrous volcanic eruption.

The unique fern fossil was collected in the 1960s, near Korsaröd in central Skåne, by farmer Gustav Andersson who donated the fossil to the Swedish Museum of Natural History. The fossil remained forgotten in the museum's collections for over 40 years before it came to the attention of the researchers. The research findings have now been published in the latest issue of the journal Science.