Ronan, a California sea lion at Long Marine Laboratory at the University of California, Santa Cruz, became an Internet sensation last year when UCSC scientists published a paper describing her ability to bob her head in time with rhythmic sounds and music in a variety of tempos (see video).

Ronan is the first non-human mammal convincingly shown to be able to keep the beat. Her range and versatility in matching different beats is impressive, according to Peter Cook, who began working with Ronan as a graduate student at UC Santa Cruz. Cook, now a postdoctoral fellow at Emory University, will present his research on Ronan's beat-keeping ability at the annual meeting of the American Association for the Advancement of Science (AAAS) in Chicago on February 15, in a session devoted to "Rhythmic entrainment in non-human animals."

Cook noted that Ronan can move in time to a wide range of rhythmic auditory stimuli with different tempos, including music. "Along with other recent findings, this suggests that the neural mechanisms underpinning flexible beat keeping may be much more widely distributed across the animal kingdom than previously thought," Cook said.

Graduate student Peter Cook trained Ronan, a California sea lion, to bob her head in time with a rhythm. 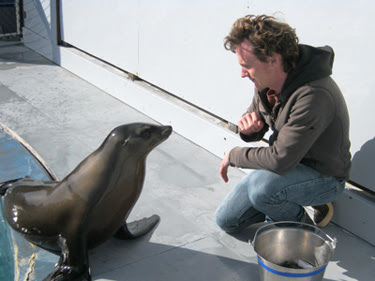 Aside from humans, rhythmic entrainment had previously been seen only in parrots and other birds with a talent for vocal mimicry. This led some researchers to theorize that beat keeping requires a capacity for complex vocal learning. "The idea was that beat keeping is a fortuitous side effect of adaptations for vocal mimicry, which requires matching incoming auditory signals with outgoing vocal behavior," Cook said.

But sea lions are not known to do vocal mimicry and have limited flexibility in the sounds they make. "Ronan's success poses a real problem for the theory that vocal mimicry is a necessary precondition for rhythmic entrainment," Cook said.

Born in the wild in 2008, Ronan was rescued by the Marine Mammal Center in Sausalito in 2009 after she was found on Highway 1 in San Luis Obispo County. It was her third stranding incident, and she didn't seem to be making it in the wild. She came to Long Marine Lab in January 2010 and joined the Pinniped Cognition and Sensory Systems Laboratory directed by one of Cook's advisers at UCSC, animal behaviorist Colleen Reichmuth.

The idea to use Ronan in a study of beat keeping was spurred partly by her facility for rapid learning. "From my first interactions with her, it was clear that Ronan was a particularly bright sea lion," Cook said. "Everybody in the animal cognition world, including me, was intrigued by the dancing bird studies, but I remember thinking that no one had attempted a strong effort to show beat keeping in an animal other than a parrot. I figured training a mammal to move in time to music would be hard, but Ronan seemed like an ideal subject."

Cook and research technician Andrew Rouse trained Ronan to bob her head in time with rhythmic sounds, then showed that she could transfer this skill to tempos and music she hadn't heard before. "Given her success at keeping the beat with new rhythm tracks and songs following her initial training, it's possible that keeping the beat isn't that hard for her," Cook said. "She just had to learn what it was we wanted her to do."

Scientists once thought that the underpinnings of musical ability were unique to humans. But human musical ability may in fact have foundations that are shared with animals, according to Cook. "People have assumed that animals lack these abilities. In some cases, people just hadn't looked," he said. "The comparative study of rhythm has undergone a renaissance in recent years, with new methods being attempted and new species tested. It's exciting to be meeting with top scientists in the field at this crucial juncture."

This research was supported by an award from the Packard Endowment for Ocean Sciences at UCSC and a National Science Foundation Graduate Student Fellowship to Peter Cook. The Pinniped Lab works with Ronan under National Marine Fisheries Service permit #14535.
on February 15, 2014