Vinegar Kills Tuberculosis And Other Mycobacteria

The active ingredient in vinegar, acetic acid, can effectively kill mycobacteria, even highly drug-resistant Mycobacterium tuberculosis, an international team of researchers from Venezuela, France, and the US reports in mBio®, the online open-access journal of the American Society for Microbiology.

Acetic acid might be used as an inexpensive and non-toxic disinfectant against drug-resistant tuberculosis (TB) bacteria as well as other stubborn, disinfectant-resistant mycobacteria. 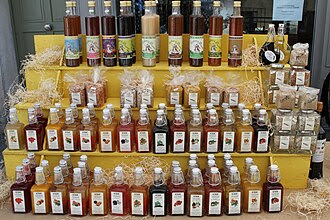 Work with drug-resistant tuberculosis bacteria carries serious biohazard risks. Chlorine bleach is often used to disinfect TB cultures and clinical samples, but bleach is toxic and corrosive. Other effective commercial disinfectants can be too expensive for TB labs in the resource-poor countries where the majority of TB occurs.

"Mycobacteria are known to cause tuberculosis and leprosy, but non-TB mycobacteria are common in the environment, even in tap water, and are resistant to commonly used disinfectants. When they contaminate the sites of surgery or cosmetic procedures, they cause serious infections. Innately resistant to most antibiotics, they require months of therapy and can leave deforming scars." says Howard Takiff, senior author on the study and head of the Laboratory of Molecular Genetics at the Venezuelan Institute of Scientific Investigation (IVIC) in Caracas.

"Many cosmetic procedures are performed outside of hospital settings in developing countries, where effective disinfectants are not available." Takiff says, "These bacteria are emerging pathogens. How do you get rid of them?"

While investigating the ability of non-TB mycobacteria to resist disinfectants and antibiotics, Takiff's postdoctoral fellow, Claudia Cortesia stumbled upon vinegar's ability to kill mycobacteria. Testing a drug that needed to be dissolved in acetic acid, Cortesia found that the control, with acetic acid alone, killed the mycobacteria she wanted to study.

"After Claudia's initial observation, we tested for the minimal concentrations and exposure times that would kill different mycobacteria," says Takiff. Since the Venezuelan lab does not work with clinical TB, collaborators Catherine Vilchèze and William Jacobs, Jr. at the Albert Einstein College of Medicine in New York tested TB strains and found that exposure to a 6% solution of acetic acid for 30 minutes effectively kills tuberculosis, even strains resistant to almost all antibiotics.

Said another way, exposure to 6% acetic acid, just slightly more concentrated than supermarket vinegar, for 30 minutes, reduced the numbers of TB mycobacteria from around 100 million to undetectable levels.

During a sabbatical in Laurent Kremer's laboratory at the University of Montpellier 2 in France, Takiff tested how effective acetic acid was against M. abscessus, one of the most resistant and pathogenic of the non-TB mycobacteria.

M. abscessus required exposure to a stronger 10% acetic acid solution for 30 minutes to be effectively eliminated. The team also tested the activity under biologically 'dirty' conditions similar to those encountered in clinical situations, by adding albumin protein and red blood cells to the acetic acid and found it was still effective.

"There is a real need for less toxic and less expensive disinfectants that can eliminate TB and non-TB mycobacteria, especially in resource-poor countries," says Takiff. He notes that even a 25% solution of acetic acid is only a minor irritant and around US$100 can buy enough acetic acid to disinfect up to 20 liters of TB cultures or clinical samples.

"For now this is simply an interesting observation. Vinegar has been used for thousands of years as a common disinfectant and we merely extended studies from the early 20th century on acetic acid," concludes Takiff. "Whether it could be useful in the clinic or mycobacteriology labs for sterilizing medical equipment or disinfecting cultures or clinical specimens remains to be determined."

mBio® is an open access online journal published by the American Society for Microbiology to make microbiology research broadly accessible. The focus of the journal is on rapid publication of cutting-edge research spanning the entire spectrum of microbiology and related fields. It can be found online at http://mbio.asm.org.