Antarctica’s Ross Sea is one of the few polar regions where summer sea-ice coverage has increased during the last few decades, bucking a global trend of drastic declines in summer sea ice across the Arctic Ocean and in two adjacent embayments of the Southern Ocean around Antarctica.

Emperor Penguins: Changes in the extent and duration of Ross Sea ice will significantly impact marine life in what is one of the world’s most productive and unspoiled marine ecosystems, where rich blooms of phytoplankton feed krill, fish, and higher predators such as penguins. 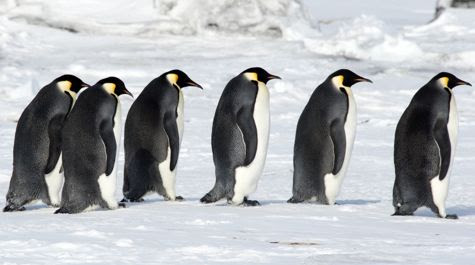 Now, a modeling study led by Professor Walker Smith of the Virginia Institute of Marine Science suggests that the Ross Sea’s recent observed increase in summer sea-ice cover is likely short-lived, with the area projected to lose more than half its summer sea ice by 2050 and more than three quarters by 2100.

These changes, says Smith, will significantly impact marine life in what is one of the world’s most productive and unspoiled marine ecosystems, where rich blooms of phytoplankton feed krill, fish, and higher predators such as whales, penguins, and seals. 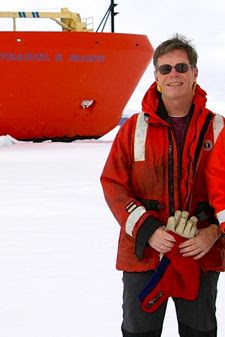 Smith, who has been conducting ship-based fieldwork in the Ross Sea since the 1980s, collaborated on the study with colleagues at Old Dominion University. Their paper, “The effects of changing winds and temperatures on the oceanography of the Ross Sea in the 21st century,” appears in the Feb. 26 issue ofGeophysical Research Letters. Smith’s co-authors are Mike Dinniman, Eileen Hofmann, and John Klinck.

Smith says “The Ross Sea is critically important in regulating the production of Antarctica’s sea ice overall and is biologically very productive, which makes changes in its physical environment of global concern. Our study predicts that it will soon reverse its present trend and experience major drops in ice cover in summer, which, along with decreased mixing of the vertical column, will extend the season of phytoplankton growth. These changes will substantially alter the area’s pristine food web.”

Researchers attribute the observed increase in summertime sea ice in the Ross Sea—where the number of days with ice cover has grown by more two months over the past three decades—to a complex interplay of factors, including changes in wind speed, precipitation, salinity, ocean currents, and air and water temperature.

Sea ice covers a large part of the Ross Sea in this summer 2007 photo. A large opening in the ice cover, or polynya, extends to the east. 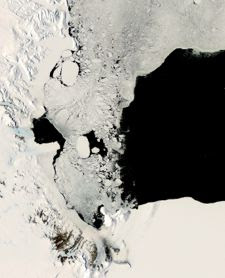 But global climate models agree that air temperatures in Antarctica will increase substantially in the coming decades, with corresponding changes in the speed and direction of winds and ocean currents. When Smith and his colleagues fed these global projections into a high-resolution computer model of air-sea-ice dynamics in the Ross Sea, they saw a drastic reduction in the extent and duration of summer sea ice.

The modeled summer sea ice concentrations decreased by 56% by 2050 and 78% by 2100. The ice-free season also grew much longer, with the mean day of retreat in 2100 occurring 11 days earlier and the advance occurring 16 days later than now.

The extent and duration of ice cover in the Ross Sea depends on a complex interplay of factors, including changes in wind speed, precipitation, salinity, ocean currents, and air and water temperature. 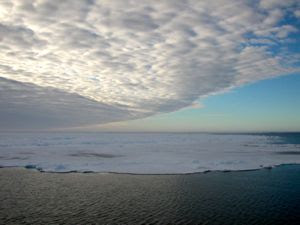 For Smith, these changes in ice, atmosphere, and ocean dynamics portend major changes in the Antarctic food web. On the bright side, the decrease in ice cover will bring more light to surface waters, while a more persistent and shallower mixed layer will concentrate phytoplankton and nutrients in this sunlit zone. These changes will combine to encourage phytoplankton growth, particularly for single-celled organisms called diatoms, with ripples of added energy potentially moving up the food web.

But, Smith warns, the drop in ice cover will negatively affect several other important species that are ice-dependent, including crystal krill and Antarctic silverfish. A decrease in krill would be particularly troublesome, as these are the major food source for the Ross Sea’s top predators—minke whales, Adélie and Emperor penguins, and crabeater seals.

Overall, says Smith, “our results suggest that phytoplankton production will increase and become more diatomaceous. Other components of the Ross Sea food web will likely be severely disrupted, creating significant but unpredictable impacts on the ocean’s most pristine ecosystem.”