This is the influenza virus under the electron microscope. 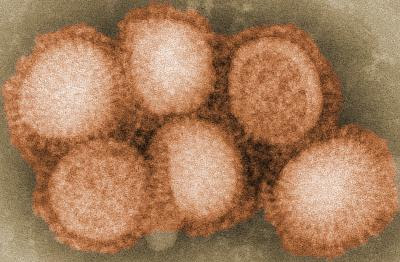 A new study reconstructing the evolutionary tree of flu viruses challenges conventional wisdom and solves some of the mysteries surrounding flu outbreaks of historical significance.

The study, published in the journal Nature, provides the most comprehensive analysis to date of the evolutionary relationships of influenza virus across different host species over time. In addition to dissecting how the virus evolves at different rates in different host species, the study challenges several tenets of conventional wisdom, for example the notion that the virus moves largely unidirectionally from wild birds to domestic birds rather than with spillover in the other direction. It also helps resolve the origin of the virus that caused the unprecedentedly severe influenza pandemic of 1918.

The new research is likely to change how scientists and health experts look at the history of influenza virus, how it has changed genetically over time and how it has jumped between different host species. The findings may have implications ranging from the assessment of health risks for populations to developing vaccines.

"We now have a really clear family tree of theses viruses in all those hosts – including birds, humans, horses, pigs – and once you have that, it changes the picture of how this virus evolved," said Michael Worobey, a professor of ecology and evolutionary biology at the University of Arizona, who co-led the study with Andrew Rambaut, a professor at the Institute of Evolutionary Biology at the University of Edinburgh. "The approach we developed works much better at resolving the true evolution and history than anything that has previously been used."

Worobey explained that "if you don't account for the fact that the virus evolves at a different rates in each host species, you can get nonsense – nonsensical results about when and from where pandemic viruses emerged."

"Once you resolve the evolutionary trees for these viruses correctly, everything snaps into place and makes much more sense," Worobey said, adding that the study originated at his kitchen table.

"I had a bunch of those evolutionary trees printed out on paper in front of me and started measuring the lengths of the branches with my daughter's plastic ruler that happened to be on the table. Just like branches on a real tree, you can see that the branches on the evolutionary tree grow at different rates in humans versus horses versus birds. And I had a glimmer of an idea that this would be important for our public health inferences about where these viruses come from and how they evolve."

"My longtime collaborator Andrew Rambaut implemented in the computer what I had been doing with a plastic ruler. We developed software that allows the clock to tick at different rates in different host species. Once we had that, it produces these very clear and clean results."

The team analyzed a dataset with more than 80,000 gene sequences representing the global diversity of the influenza A virus and analyzed them with their newly developed approach. The influenza A virus is subdivided into 17 so-called HA subtypes – H1 through H17 – and 10 subtypes of NA, N1-N10. These mix and match, for example H1N1, H7N9, with the greatest diversity seen in birds.

Using the new family tree of the flu virus as a map showed which species moved to which host species and when. It revealed that for several of its 8 genomic segments avian influenza virus is not nearly as ancient as often assumed.

"What we're finding is that the avian virus has an extremely shallow history in most genes, not much older than the invention of the telephone," Worobey explained.

The research team, which included UA graduate student Guan-Zhu Han and Andrew Rambaut, a professor from the University of Edinburgh who is also affiliated with the U.S. National Institutes of Health, found a strong signature in the data suggesting that something revolutionary happened to avian influenza virus, with the majority of its genetic diversity being replaced by some new variant in a selective sweep in an extremely synchronous event.

Worobey said the timing is provocative because of the correlation of that sudden shift in the flu virus' evolution with historical events in the late nineteenth century.

"In the 1870s, an immense horse flu outbreak swept across North America," Worobey said, "City by city and town by town, horses got sick and perhaps five percent of them died. Half of Boston burned down during the outbreak, because there were no horses to pull the pump wagons. Out here in the West, the U.S. Cavalry was fighting the Apaches on foot because all the horses were sick. This happened at a time when horsepower was actual horse power. The horse flu outbreak pulled the rug out from under the economy."

According to Worobey, the newly generated evolutionary trees show a global replacement of the genes in the avian flu virus coinciding closely with the horse flu outbreak, which the analyses also reveal to be the closest relative to the avian virus.

"Interestingly, a previous research paper analyzing old newspaper records reported that in the days following the horse flu outbreak, there were repeated outbreaks described at the time as influenza killing chickens and other domestic birds," Worobey said. "That's another unexpected link in the history, and the there is a possibility that the two might be connected, given what we see in our trees."

He added that the evolutionary results didn't allow for a definitive determination of whether the virus jumped from horses to birds or vice versa, but a close relationship between the two virus species is clearly there.

With regard to humans, the research sheds light on a longstanding mystery. Ever since the influenza pandemic of 1918, it has not been possible to narrow down even to a hemisphere the geographic origins of any of the genes of the pandemic virus.

"Our study changes that," Worobey said. "It is now clear that most of its genome jumped from birds very close to 1918 in the Western Hemisphere, and there is a suggestion that it was North America in particular."

The results also challenge the accepted wisdom of wild birds as the major reservoir harboring the flu virus, from where it jumps to domestic birds and other species, including humans. Instead, the genetic diversity across the whole avian virus gene pool in domestic and wild birds often appears to trace back to earlier outbreaks of the virus in domestic birds, Worobey explained.

"People tend to think of wild birds as the source of everything, but we see a very strong indication of spillover from domestic birds to wild birds," he said. "It turns out the animals we keep for food and eggs may be substantially shaping the diversity of these viruses in the wild over time spans of decades. That is a surprise."


Contacts and sources:
Daniel Stolte
University of Arizona
on February 17, 2014