Picture a single cloud large enough to span the solar system from the sun to beyond Pluto's orbit. Now imagine many such clouds orbiting in a vast ring at the heart of a distant galaxy, occasionally dimming the X-ray light produced by the galaxy's monster black hole.

An artist's rendition of the cloudy structure revealed by a study of data from NASA's Rossi X-Ray Timing Explorer satellite. 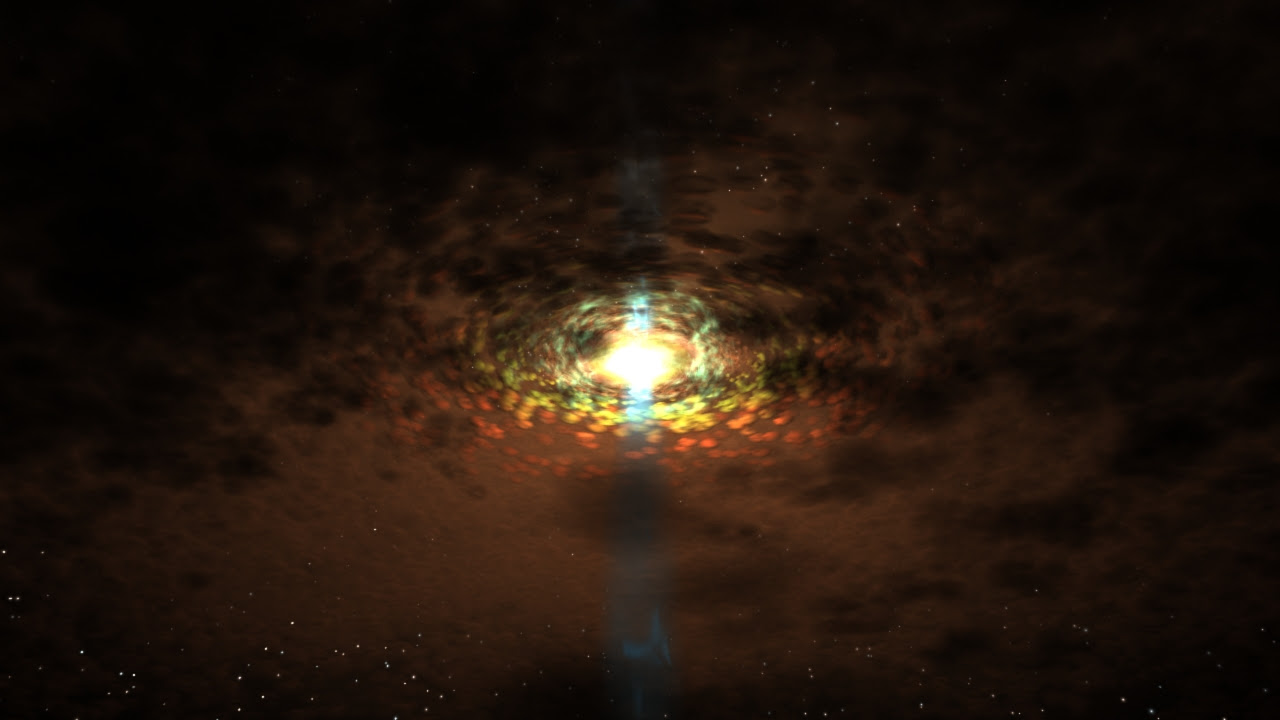 Using data from NASA's Rossi X-ray Timing Explorer (RXTE) satellite, an international team has uncovered a dozen instances where X-ray signals from active galaxies dimmed as a result of a cloud of gas moving across our line of sight. The new study triples the number of cloud events previously identified in the 16-year archive.

Zoom into the cloudy heart of an active galaxy. This animation shows an artist's rendition of the cloudy structure revealed by a study of data from NASA's Rossi X-Ray Timing Explorer satellite.

At the hearts of most big galaxies, including our own Milky Way, there lurks a supermassive black hole weighing millions to billions of times the sun's mass. As gas falls toward a black hole, it gathers into a so-called accretion disk and becomes compressed and heated, ultimately emitting X-rays. The centers of some galaxies produce unusually powerful emission that exceeds the sun's energy output by billions of times. These are active galactic nuclei, or AGN.

"One of the great unanswered questions about AGN is how gas thousands of light-years away funnels into the hot accretion disk that feeds the supermassive black hole," said Alex Markowitz, an astrophysicist at the University of California, San Diego and the Karl Remeis Observatory in Bamberg, Germany. "Understanding the size, shape and number of clouds far from the black hole will give us a better idea of how this transport mechanism operates."

The study is the first statistical survey of the environments around supermassive black holes and is the longest-running AGN-monitoring study yet performed in X-rays. In the paper, which will appear in a future issue of Monthly Notices of the Royal Astronomical Society and is now published online, the scientists describe various properties of the occulting clouds, which vary in size and shape but average 4 billion miles (6.5 billion km) across – greater than Pluto's distance from the sun -- and twice the mass of Earth. They orbit a few light-weeks to a few light-years from the black hole.

RXTE's instruments measured variations in X-ray emission on timescales as short as microseconds and as long as years across a wide energy span, from 2,000 to 250,000 electron volts. For comparison, the energy of a typical dental X-ray is around 60,000 electron volts. NASA decommissioned the observatory in 2012, following 16 years of successful operation in Earth orbit.

"Because RXTE performed sustained observations of many of these AGN, our research is sensitive to a wide range of cloud events, from those as brief as five hours to as long as 16 years," said co-author Robert Nikutta, a theorist at Andrés Bello University in Santiago, Chile.

For decades, astronomers explained the different observed properties of AGN by suggesting that a relatively uniform "doughnut" of dust and gas surrounds the black hole and extends several light-years away from it. Interference from this material is lowest when we happen to be looking into the doughnut from above or below and greatest when we view it from the side. Now astronomers are moving toward a new generation of models that view the doughnut as a collection of many individual clouds mostly distributed along its central plane, a view supported by the RXTE study.

One of the more unusual events the team turned up occurred in NGC 3783, a barred spiral galaxy located 143 million light-years away toward the constellation Centaurus. "In 2008, the AGN dimmed twice over a period of 11 days and did not reach its typical X-ray brightness within that period," said co-author Mirko Krumpe of the European Southern Observatory in Garching, Germany. "This could be caused by an elongated, filamentary cloud, perhaps one that is in the process of being torn apart by the black hole."