With the help of a tiny fragment of zircon extracted from a remote rock outcrop in Australia, the picture of how our planet became habitable to life about 4.4 billion years ago is coming into sharper focus.

Writing today (Feb. 23, 2014) in the journal Nature Geoscience, an international team of researchers led by University of Wisconsin-Madison geoscience Professor John Valley reveals data that confirm the Earth's crust first formed at least 4.4 billion years ago, just 160 million years after the formation of our solar system. The work shows, Valley says, that the time when our planet was a fiery ball covered in a magma ocean came earlier.

A 4.4 billion-year-old zircon crystal is providing new insight into how the early Earth cooled from a ball of magma and formed continents just 160 million years after the formation of our solar system, much earlier than previously believed. The zircon, pictured here, is from the Jack Hills region of Australia and is now confirmed to be the oldest bit of the Earth's crust. 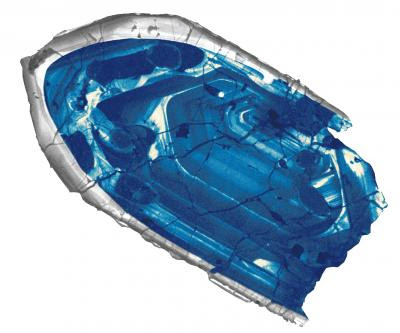 "This confirms our view of how the Earth cooled and became habitable," says Valley, a geochemist whose studies of zircons, the oldest known terrestrial materials, have helped portray how the Earth's crust formed during the first geologic eon of the planet. "This may also help us understand how other habitable planets would form."

The new study confirms that zircon crystals from Western Australia's Jack Hills region crystallized 4.4 billion years ago, building on earlier studies that used lead isotopes to date the Australian zircons and identify them as the oldest bits of the Earth's crust. The microscopic zircon crystal used by Valley and his group in the current study is now confirmed to be the oldest known material of any kind formed on Earth.

The study, according to Valley, strengthens the theory of a "cool early Earth," where temperatures were low enough for liquid water, oceans and a hydrosphere not long after the planet's crust congealed from a sea of molten rock. "The study reinforces our conclusion that Earth had a hydrosphere before 4.3 billion years ago," and possibly life not long after, says Valley.

This is a timeline of the history of our planet places the formation of the Jack Hills zircon and a "cool early Earth" at 4.4 billion years. 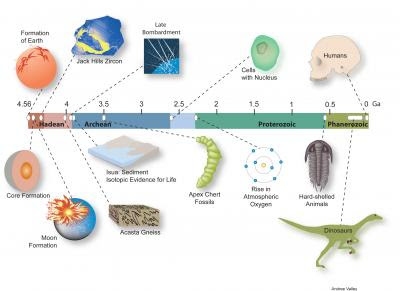 The study was conducted using a new technique called atom-probe tomography that, in conjunction with secondary ion mass spectrometry, permitted the scientists to accurately establish the age and thermal history of the zircon by determining the mass of individual atoms of lead in the sample. Instead of being randomly distributed in the sample, as predicted, lead atoms in the zircon were clumped together, like "raisins in a pudding," notes Valley.

The clusters of lead atoms formed 1 billion years after crystallization of the zircon, by which time the radioactive decay of uranium had formed the lead atoms that then diffused into clusters during reheating. "The zircon formed 4.4 billion years ago, and at 3.4 billion years, all the lead that existed at that time was concentrated in these hotspots," Valley says. "This allows us to read a new page of the thermal history recorded by these tiny zircon time capsules."

The formation, isotope ratio and size of the clumps — less than 50 atoms in diameter — become, in effect, a clock, says Valley, and verify that existing geochronology methods provide reliable and accurate estimates of the sample's age. In addition, Valley and his group measured oxygen isotope ratios, which give evidence of early homogenization and later cooling of the Earth.

"The Earth was assembled from a lot of heterogeneous material from the solar system," Valley explains, noting that the early Earth experienced intense bombardment by meteors, including a collision with a Mars-sized object about 4.5 billion years ago "that formed our moon, and melted and homogenized the Earth. Our samples formed after the magma oceans cooled and prove that these events were very early."


Contacts and sources:
John Valley
University of Wisconsin-Madison
on February 24, 2014