The sun emitted a significant solar flare, peaking at 7:49 p.m. EST on Feb. 24, 2014. NASA's Solar Dynamics Observatory, which keeps a constant watch on the sun, captured images of the event.

An X-class solar flare erupted on the left side of the sun on the evening of Feb. 24, 2014. This composite image, captured at 7:59 p.m. EST, shows the sun in ultraviolet light with wavelengths of both 131 and 171 angstroms. Solar flares are powerful bursts of radiation, appearing as giant flashes of light in the SDO images. Harmful radiation from a flare cannot pass through Earth's atmosphere to physically affect humans on the ground, however -- when intense enough -- they can disturb the atmosphere in the layer where GPS and communications signals travel.

These SDO images from 7:25 p.m. EST on Feb. 24, 2014, show the first moments of an X-class flare in different wavelengths of light -- seen as the bright spot that appears on the left limb of the sun. Hot solar material can be seen hovering above the active region in the sun's atmosphere, the corona. 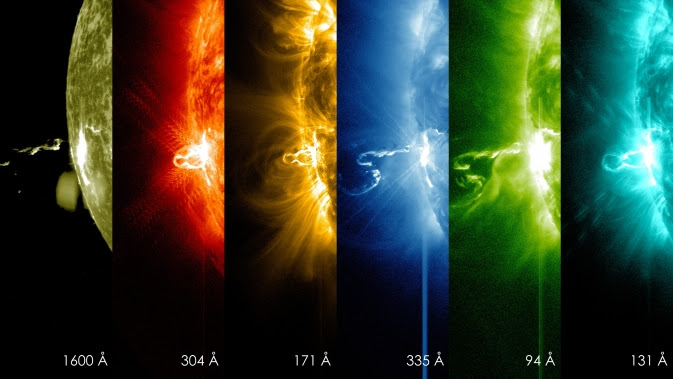 This flare is classified as an X4.9-class flare. X-class denotes the most intense flares, while the number provides more information about its strength. An X2 is twice as intense as an X1, an X3 is three times as intense, etc.