Scientists have solved a major problem with the current standard model of cosmology identified by combining results from the Planck spacecraft and measurements of gravitational lensing in order to deduce the mass of ghostly sub-atomic particles called neutrinos.

The team, from the universities of Manchester and Nottingham, used observations of the Big Bang and the curvature of space-time to accurately measure the mass of these elementary particles for the first time.

The recent Planck spacecraft observations of the Cosmic Microwave Background (CMB) – the fading glow of the Big Bang – highlighted a discrepancy between these cosmological results and the predictions from other types of observations.

The microwave sky as seen by Planck. This multi-frequency all-sky image of the microwave sky has been composed using data from Planck covering the electromagnetic spectrum from 30 GHz to 857 GHz. 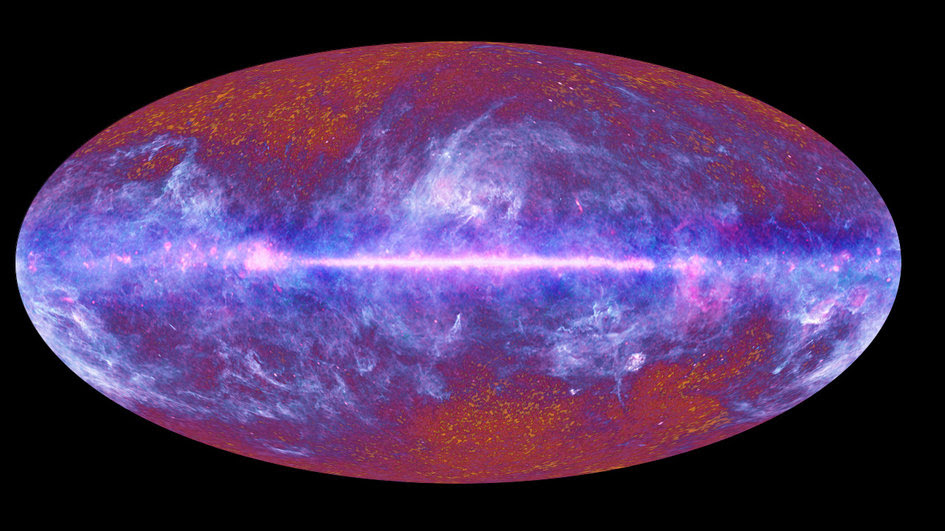 Professor Richard Battye, from The University of Manchester School of Physics and Astronomy, said: "We observe fewer galaxy clusters than we would expect from the Planck results and there is a weaker signal from gravitational lensing of galaxies than the CMB would suggest.

"A possible way of resolving this discrepancy is for neutrinos to have mass. The effect of these massive neutrinos would be to suppress the growth of dense structures that lead to the formation of clusters of galaxies."

Neutrinos interact very weakly with matter and so are extremely hard to study. They were originally thought to be massless but particle physics experiments have shown that neutrinos do indeed have mass and that there are several types, known as flavours by particle physicists. The sum of the masses of these different types has previously been suggested to lie above 0.06 eV (much less than a billionth of the mass of a proton).

In this paper, Professor Battye and co-author Dr Adam Moss, from the University of Nottingham, have combined the data from Planck with gravitational lensing observations in which images of galaxies are warped by the curvature of space-time. They conclude that the current discrepancies can be resolved if massive neutrinos are included in the standard cosmological model. They estimate that the sum of masses of neutrinos is 0.320 +/- 0.081 eV (assuming active neutrinos with three flavours).

Dr Moss said: "If this result is borne out by further analysis, it not only adds significantly to our understanding of the sub-atomic world studied by particle physicists, but it would also be an important extension to the standard model of cosmology which has been developed over the last decade."

Contacts and sources:
Aeron Haworth
University of Manchester
on February 10, 2014