Looking Back To The Cradle Of Our Universe

NASA's Spitzer and Hubble Space Telescopes have spotted what might be one of the most distant galaxies known, harkening back to a time when our universe was only about 650 million years old (our universe is 13.8 billion years old). The galaxy, known as Abell2744 Y1, is about 30 times smaller than our Milky Way galaxy and is producing about 10 times more stars, as is typical for galaxies in our young universe.

This image of the galaxy cluster Abell 2744 was obtained with NASA's Hubble Space Telescope. The zoomed image shows the region around the galaxy Abell2744_Y1, one of the most distant galaxy candidates known, harkening back to a time when the universe was 650 million years old. NASA's Spitzer Space Telescope helped to narrow in on the galaxy's great distance.

The discovery comes from the Frontier Fields program, which is pushing the limits of how far back we can see into the distant universe using NASA's multi-wavelength suite of Great Observatories. Spitzer sees infrared light, Hubble sees visible and shorter-wavelength infrared light, and NASA's Chandra X-ray Observatory sees X-rays. The telescopes are getting a boost from natural lenses: they peer through clusters of galaxies, where gravity magnifies the light of more distant galaxies.

The Frontier Fields program will image six galaxy clusters in total. Hubble images of the region are used to spot candidate distant galaxies, and then Spitzer is needed to determine if the galaxies are, in fact, as far as they seem. Spitzer data also help determine how many stars are in the galaxy.

These early results from the program come from images of the Abell 2744 galaxy cluster. The distance to this galaxy, if confirmed, would make it one of the farthest known. Astronomers say it has a redshift of 8, which is a measure of the degree to which its light has been shifted to redder wavelengths due to the expansion of our universe. The farther a galaxy, the higher the redshift. The farthest confirmed galaxy has a redshift of more than 7. Other candidates have been identified with redshifts as high as 11.

This long-exposure image from NASA's Hubble Space Telescope of massive galaxy cluster Abell 2744 is the deepest ever made of any cluster of galaxies. It shows some of the faintest and youngest galaxies ever detected in space. Abell 2744, located in the constellation Sculptor, appears in the foreground of this image. It contains several hundred galaxies as they looked 3.5 billion years ago. The immense gravity in Abell 2744 acts as a gravitational lens to warp space and brighten and magnify images of nearly 3,000 distant background galaxies. The more distant galaxies appear as they did longer than 12 billion years ago, not long after the big bang. 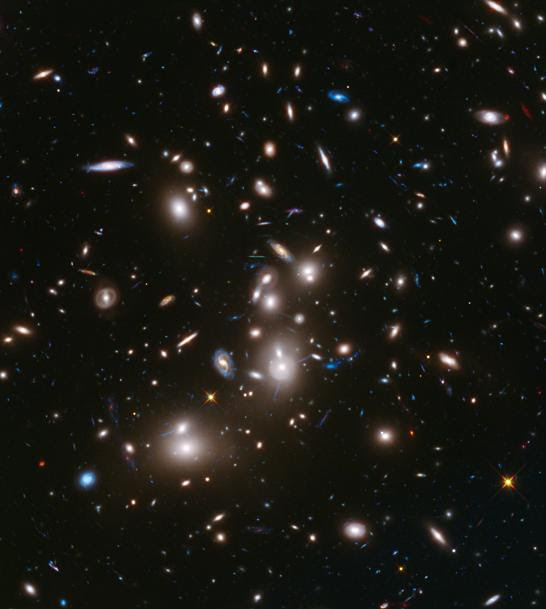 "Just a handful of galaxies at these great distances are known," said Jason Surace, of NASA's Spitzer Science Center at the California Institute of Technology, Pasadena. "The Frontier Fields program is already working to find more of these distant, faint galaxies. This is a preview of what's to come."

The findings, led by astronomers from the Instituto de Astrofísica de Canarias and La Laguna University, are accepted for publication in the scientific journal Astronomy and Astrophysics Letters.

The Hubble Space Telescope is a project of international cooperation between NASA and the European Space Agency. NASA's Goddard Space Flight Center manages the telescope. The Space Telescope Science Institute (STScI) conducts Hubble science operations. STScI is operated for NASA by the Association of Universities for Research in Astronomy, Inc., in Washington, D.C. For more information, visit: http://hubblesite.org andhttp://www.nasa.gov/hubble.