Recent deaths in both Canada and the UK linked to PMA/PMMA in ecstasy pills has brought public scrutiny to this little known drug. With Canadian producing most of the ecstasy in the North American market, this timely paper (Ecstasy, legal highs and designer drug use: A Canadian perspective) published this week in Drug Science Policy and Law looks at trends in ecstasy adulteration, the facts around PMA/PMMA-linked deaths and explores alternatives to the endless banning of new drugs.

In 2007, according to the Health Canada Drug Analysis Service, only 3% of seized ecstasy tablets contained pure MDMA compared to 69% in 2001.

The notorious 'face-eating zombie' case from Florida in 2012 was found to have no link to 'bath salts', specifically MDPV, despite initial reports.

The authors assert that legislation does not deter drug use and call for improved education rather than criminalisation. The Independent Scientific Committee on Drugs, who host the journal, have provided harm reduction advice for anyone that might come into contact with PMA/PMMA. 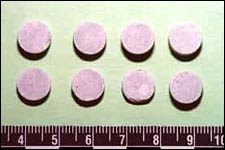 Lead author Alan Hudson commented: "It is clear that not only is PMA/PMMA a real danger for those that take ecstasy, there is an urgent need for more education on how to reduce harms and recognition that constant criminalisation is not effective. We must make sure young people are informed of PMMA's real risks and join up efforts across specialisms and across national lines to ensure such tragedies do not happen again"